You are here: HomenextExplore our archivenextPlacesnextA miscellany of placesnextThe Mushrooms and Toadstools of Drummin Wood

The Mushrooms and Toadstools of Drummin Wood

Notes from an autumn ramble 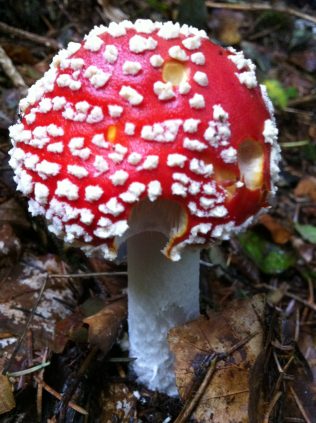 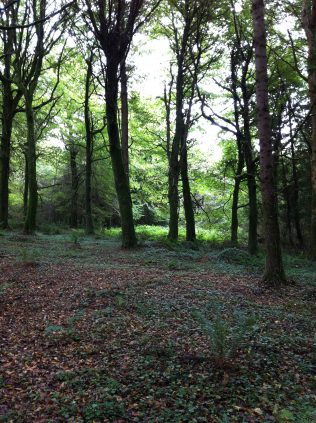 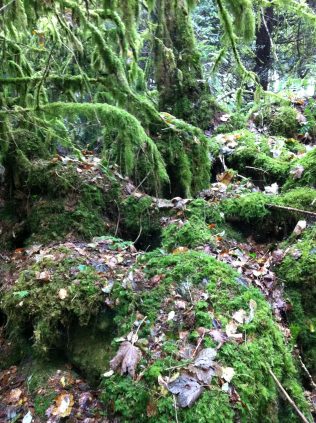 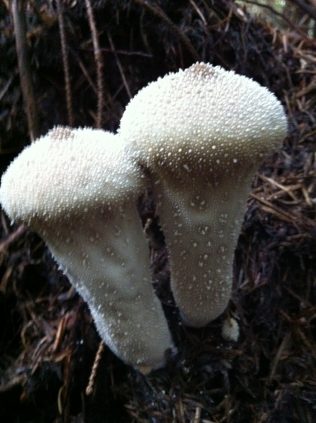 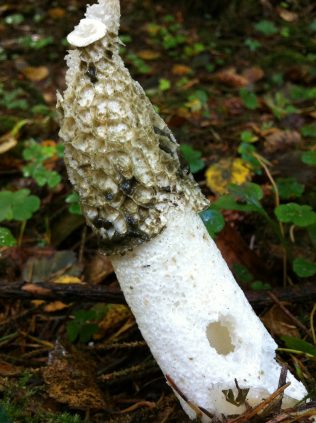 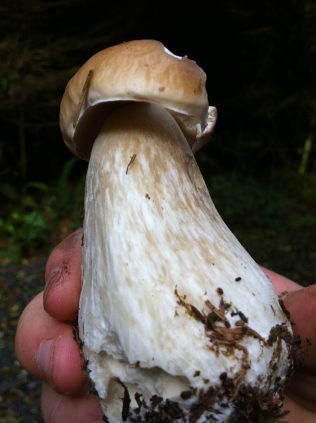 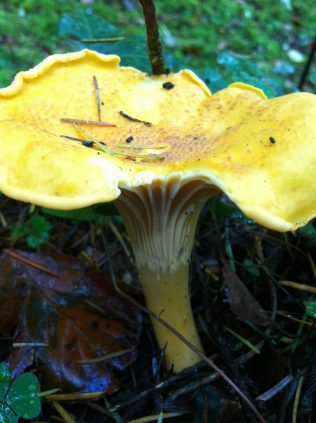 zoom
The beautiful and much sought after Chanterelle
Lorna Elms 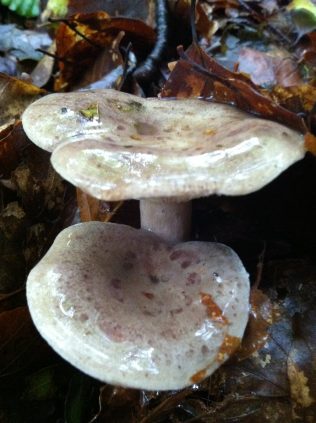 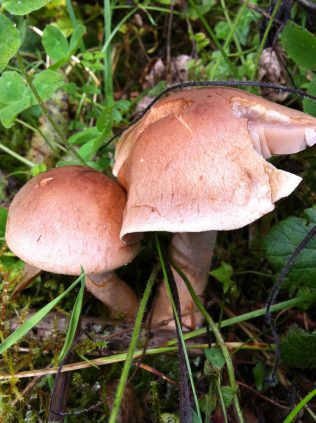 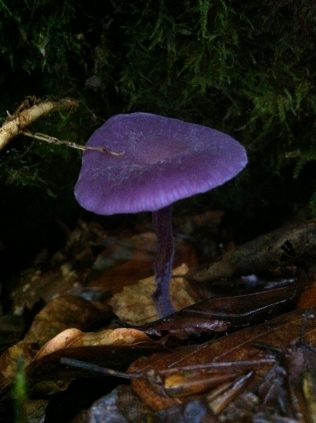 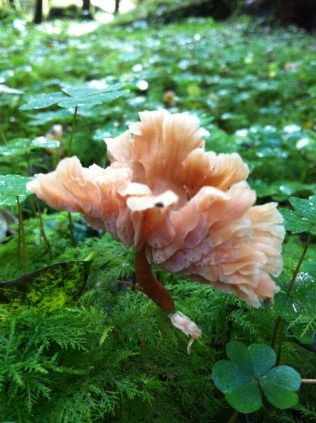 Opposite Lough Cullin in Co. Mayo, on the road between Foxford and Pontoon, you will find Drummin Wood. This special place comprises both naturalised broadleaf woods and coniferous plantation. During the First World War the timber from this wood was used to fuel the nearby Foxford Woollen Mills.

Drummin offers not only a picturesque path for walkers but for amateur flora and fauna detectives like me, it also offers the chance to explore a woodland habitat barely touched by human hands. Walking there this autumn I discovered such a treasure trove of fungi that I thought I had been transported to the Garden of Eden.

A lesson in bio-diversity

Traversing the wide walkway between the mixed woodland to the left and pine trees on the right, the two types of plantation offer a lesson in bio-diversity. One cannot help but contrast the abundance of plant species to be found on the floor of the broadleaf, mainly deciduous woods with the dark, and in comparison barren, forest floor of the evergreen pines.

Entering the more enticing and accessible wood to the left of the path you find mainly native species of Ash, Holly and Hazel. There are also good stands of Beech; a tree particularly favoured by many species of mushrooms and toadstools. Widely spaced trees and sunny glades are juxtaposed with trees surrounded by roots and rocks dripping with mosses and crusted with lichens, evoking a prehistoric feel. This is my favourite part of Drummin.

Autumn is the time when fungi are most prevalent, their fruiting bodies appearing above ground, on rotting wood and protruding from trees. It is generally considered that a mushroom is edible and a toadstool is poisonous. Arriving in late September I happened across a group of Eastern European ladies laden with the mushrooms they had collected. This foraging for edible mushrooms is common practice in the densely forested lands of their home countries’ and the skill of recognition learned at a young age. Eating mushrooms can be a risky business and I would not advise anyone to eat any that they are not absolutely sure about. Having recorded my finds I consulted Dr Howard Fox of the National Botanic Gardens who identified a great many for me; some of which, both poisonous and edible, feature here.

For me, the most striking of all fungi is the magical Fly Agaric (Amanita muscaria: Agairg Cuileoige). I love this toadstool so much that we named our eldest son, Garrick, after it. I have rarely been lucky enough to witness this fantastical fungus and was thrilled to see a healthy population pushing up here and there through the leaf mould.

The Fly Agaric is noted for its hallucinogenic properties (and related symptoms of sickness and diarrheoa) as well as its association with witches’ potions. So powerful is its effect that it was not just the toadstool itself that was consumed but the urine of a person who had consumed it, was also drunk for its inebriating effects. Another use for the Fly Agaric was as a flycatcher. The toadstool was broken up and steeped in sugar water to attract the flies, which would be poisoned on ingesting the liquid. This deadly mix would have been kept in a special decanter such as the one on display in the drawing room of Turlough Park House, National Museum of Ireland – Country Life.

A cure for bleeding

The Common Puffball (Lycoperdon: Bolgan Béice) is sphere-shaped, pimpled and ‘puffs’ out its spores. Folklore collected in Co. Meath states that ‘One way to stop bleeding is to get a blind-ball. Put the spongey part of it to the cut and it stops bleeding instantly’* These mushrooms are edible when young.

On this ramble I spotted my first Stinkhorn (Phallus impudicus: Adharc Phúca).  It emits a foul, sewerage odour that hits you from around 30 feet away. This ‘stink’ attracts the flies for its pollination. Also called ‘snake-combe’ in England due to the belief that snakes emerged like bees from its ‘honeycomb’.

The National Library of Ireland has medical receipt books housed in the Manuscript Department listing the ‘Stinking Roger’ as one ingredient in a remedy for The King’s Evil, a nasty complaint otherwise known as Scrophula. You can read about ‘Suet, Snails and Sticking Roger’ here

The emerging Stinkhorn forms ‘witches eggs’ which were traditionally eaten across Europe.

There are many types of edible mushrooms in the Boletus family and one of my best finds was the Penny Bun Boletus, Cep or Toad’s Bonnet (Boletus edulus: bonaid an losgainn). Considered excellent, this fungus can be found for sale at continental markets, on our supermarket shelves in its dried form or as flavouring in soups.

I stumbled across the much-lauded, deep yellow Chanterelle appearing suddenly amongst the green moss and wood sorrel like scattered treasure. This mushroom smells faintly of apricots and is considered delicious. If you’re lucky visiting at the right time, you too might get to see such a wonder.

Mushrooms and toadstools or ’pookauns’ are associated with the little people especially ‘faery rings’ where the faeries dance on moonlit nights. Folklore tells us that it is safe to walk straight through these circular formations but it is unlucky to tread the faeries’ path around their circumference.

These photographs represent a fraction of the fungi recorded at the end of September 2011. If you would like to experience the variety, colour, smell and even taste of Irish fungi, then I can recommend no better place than Drummin Wood.

Always leave places of natural beauty as you find them and only eat mushrooms that you are certain are edible or you could end up with much worse than sickness and diarrheoa.

Walkers: follow the path through Drummin Wood until you reach a T junction, take a left and eventually you will come out onto open rocky hillside covered in blanket bog. Climb to the top of the hill for magnificent views of Lough Conn, Lough Cullin, Nephin and Croagh Patrick.