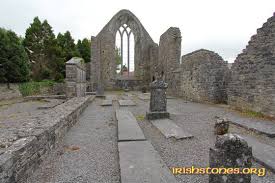 The abbey of the hermits of St. Augustine was founded by Elizabeth de Clare prior to 1337.  It was located a few hundred metres north of the town centre.  It was referenced in the Dominican Priory of Athenry.  The date of its construction is unknown but an unpublished history of the Augustinians in their archives at St. John’s Lane in Dublin claimed that the Friary was founded in 1337 by Roger Taffe.  A further reference to the cloister stated that it may have been founded earlier than 1338.  It had been suggested that Elizabeth de Clare; a granddaughter of King Edward I, wife of John de Burgh (who was son & heir of the 2nd Earl of Ulster, Richard Óg de Burgh) may have been a patron of the friars.  Possibly the foundation of Ballinrobe Friary , Co. Mayo was a thanksgiving gift following the birth of their son during 1312.  Beside the east window, the south wall of the church choir featured a piscina with a tomb niche & sedilia that were typical elements of a Mendicant church.  The large east window of the church had a three-light with switch line tracery.  During 1400 Pope Boniface IX granted an indulgence to parishioners who assisted with the repair & conservation of the Friary.  In 1413 several friars from the Ballinrobe Friary founded a new community in an abandoned Carmelite Friary at Burriscarra when they were granted the order with the consent of Pope Gregory XII.   Again during 1421 Pope Eugene IV offered another indulgence to those who would assist with the ‘completion, decoration and fabric of the church’, as it ‘lacks a bell tower, and is very destitute of books, chalices and other ecclesiastical ornaments.’

In the general Archives of the Order from March 1423 a reference to Richard O ‘ Madden referred to his acceptance of permanent membership of the Ballinrobe community. During 1584 the friars were in position of over thirty acres also a two-acre parcel (named St. John’s) also a watercourse & mill.  (It was possible that St John’s was the site of the church of St. John’s the Baptist that belonged to the Knights Hospitallers )  The friary survived their position despite upheaval following the 1641 Rebellion.  During 1642 Ballinrobe Friary was gifted a chalice by Malachy O ‘Queely the Catholic archbishop of Tuam, with the inscription that requested prayers for the archbishop: ‘Orate pro Illo D D Malachia kaolly Archiepo Tuamens qiu [sic] me fieri fecit frib9 Augustinianis de Dalynroba 1642.’   The restoration of the Friary was completed in 1994 by FAS with the Lough Mask also Lough Carra Tourist Development Association.  It was officially opened by President Mary Robinson.  During 2009 a plaque in the graveyard includes a copy of the Seal of the Priory.  This era the Church ruins survive: they stand within its own graveyard just above the former flood plains of the River Robe that flows west of the site.  This site features several images on page. [i]

The ruins of the Augustinian Abbey in Ballinrobe on the north side of Town was the first monastic foundation west of the Shannon.  Believed to have been founded circa 1312 by Elizabeth de Clare, wife of John de Burgh, granddaughter of King Edward 1 to celebrate the birth of their first son William.   An archive in Dublin stated that it was founded in 1337 by Roger Taffe.  During 1400 Pope Boniface 1X granted Indulgences to all who assisted with the preservation of the friary.  The community was reduced to poverty during 1413 when the building was destroyed by fire.  But it recovered to survive with a mass celebrated there as late as 1692.  The ruined wall is surrounded by a graveyard.  There are a nave & chancel within the ruins.  Parts of the original west doorway were fluted whilst the overhead widow was retrieved from the east gable.  East tracery window’s restoration was based on original fragments.  There are two paired piscine’s & sedilia’s in the building.  The structure towards the north-east may have been the chapter house.  This may be assessed through steps with a doorway in the north wall.  A narrow doorway assesses a small square chapel with widely splayed embrasure that contains a narrow light window.  A cross slab was discovered during excavations beneath the west doorway. (Patrick Comerford) [ii]

The arrival during the twelfth century of the Combro-Norman tribes to Connaught saw the first foundation of nine by the Augustinian Canons Friary west of the Shannon.  There is no exact date of its building but during 1337 according to the Dominican Priory Register in an unpublished document  at St. John’s Lane archives in Dublin.  Another possibility was it may have been founded during 1337 on the order of Roger Taffe under the Burke family’s orders.  During the 1400’s an indulgence was granted by Pope Boniface 1X to parishioners who assisted with the restoration of the friary.  Indulgence was granted by Pope 1V for an additional restoration & purchases of ecclesiastical items.  By 1584 the abbey had acquired approximately one hundred-twenty acres with a watercourse also a mill.  As the Carmelite House of Burriscarra had been vacant for over thirty years it was granted to Ballinrobe Friary by Edmund Stanton.  This friary was occupied during 1574 & retained its position despite King Henry’s V111, his son Edward also Queen Elizabeth1’s ownership of several Ballinrobe properties.  During the year 1994 restoration took place of the friary under the auspices of FAS with the Ballinrobe Tourist Development Association.  A plaque was erected by Ruaidhri de Barra in 2009 with a copy of the seal (housed in the British Museum in London) within the grounds of the friary: the launch was by the former President of Ireland Mrs. Mary Robinson. (Averil Staunton 19 /01 /2011) [iii]

According to the archaeological survey of Ballinrobe a friary is listed under abbeys & friaries at the Friarsquarters west of Ballinrobe. dated 1929 the ‘Abbey in Ruins OS118:2:5 (335,431) OD 50-100 11947, 26483 : above the former flood plains of River Robe on slightly raised ground is a Friary.’   This was the first Augustinian monastery within Connacht.  It was possibly established by Elizabeth de Clare circa 1312.  Repairs were made to the building during 1400 & 1431.  Friars were in occupation during 1574 also following the Rebellion of 1641 (Gwynn & Hancock 1970 page 296 )  From 1900-1994 excavations by FAS / LMLCT prior to conservation &  restoration.  A cross slab was discovered beneath the west doorway. A church 7. 1 metres north-south  & 34.6. metres east-west consisted of a nave & chancel.  Parts of the west doorway with rope fluting are original whilst an overhead window was retrieved from the east gable.  The reconstruction of the east window was based on original fragments.  On the south wall are two piscinias also a sedilia.  Splayed windows contained two distinct mason marks.  An unknown building on the north east external corner of the church is assessed through a doorway with steps within the north wall.  A narrow doorway of that wall gives access to a square chapel with widely splayed embrasure that contained a narrow light. Ballinrobe Friary had its own seal that now is in the British Museum.  118: 154/01: (2-7-1993) Information from The Bridge  by Patrick F. Wallace. (Maggie Blank August 2019) [iv]

It was believed that Roger Taffe on behalf of the de Burgh’s / Burkes established the Ballinrobe Friary.   Register of the Augustinian Canons reported that the friary was the first foundation west of the Shannon.  Despite King Henry V111’s attempt at dissolution of monasteries during 1540 Ballinrobe Monastery succeeded to be a successful venture.  Monks were still in position during 1574.  They had in their position ten years later one hundred-twenty acres to the east of the river.  Papal indulgences were awarded during 1400 & 1413 for assistance & reconstruction of the building by Pope Boniface 1X & Pope Eugene 1V.  During 1994 FAS with the local Tourist Development Association Ballinrobe Friary was restored.   A plaque was erected at the priory with a copy of the seal from London’s British Museum by Ruaidhri de Barra in 2009.  [v]

The ruins of the friary to the north of Ballinrobe town are on a higher ground than the former plains of the River Robe.  Founded by Elizabeth de Clare the youngest daughter of the 6th Earl of Helford Gilbert de Clare.  She was granddaughter of King Edward 1 on her maternal side.  She married John de Burgh during 1308.  When their son William was born in 1312 it was believed they established the friary to celebrate his birth.  During 1400 Pope Boniface 1X granted indulgences for the restoration of the friary.  The building was damaged by fire during 1413.  Be the year 1584 the friary had acquired over one hundred & twenty acres with a watercourse & a mill.  It also survived King Henry V111’s suppression orders.  Church ruins are located within a graveyard that have a nave & chancel building aligned west.  West doorway had a rope fluting with some reconstructed parts.  Above there is a two-light window.  The east window has three lights that have been fully constructed.  The north wall no longer exists while the south has several parts. The building had a piscina & a sedila.  From the chancel a small lintelled doorway in the north wall leads to a damaged building, possibly a church.  A silver seal was discovered on the site (the original is now housed within the British Museum in London)  The oval medal had an inscription on the outer diameter ‘SIGILLUM CONVENT ORDIS: ERMITT. S. AUG. J.’   Four hearts with an inscription of ‘BALENROBE’  may be viewed on the inner area.  The coordinates of the Friary are 53 37 34.56 N,  0 09 13 15.96 W. (Antinio D ‘Imperio 2003-2021) [vi]

A monastery for the monks of the Order of St. Augustine was founded in Ballinrobe during 1337.  It was referenced in the Athenry Dominican Friary Register under the name of Monastery de Roba. [vii]

Ballinrobe Friary was founded by Adam de Staunton as a Carmelite Monastery during 1298.  It continued until the fourteenth century.  Augustinian Monks established a community there from 1413. [viii]

Ballinrobe Friary is referenced in Samuel Lewis’s Topographical Dictionary of Ireland 1837 at this link: https://www.libraryireland.com/topog/B/Ballinrobe-Kilmaine-Mayo.php

This site states that the first site of the Augustinian Order within Ireland was at Ballinrobe:  http://friaryburialgroundballyhaunis.yolasite.com/

This site states that on the back of a photograph is a written note: 72.476, in Ballinrobe, Co. Mayo an Augustinian Friary with a piscina also a sedilia tomb niche (enfeu ) is in the south wall of chancel at the east end.  Several images of the friary feature on this link. [ix]

The register from the Dominican Friary of Athenry Galway referenced an Augustinian Monastery at de Roba. [xi]

This PDF may be of interest re.history  of establishments in Connaught by Dr. Fiona White & Dr. Yvonne Mc Dermott refers to Burriscarra Friary. [xii]