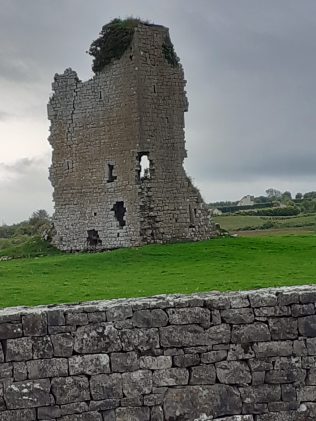 Donomona Castle played a central part in the history of the Clogher area of County Mayo.  It was originally a Bourke stronghold.  During the early fifteenth century the O ‘Kellys of Ui Maine resided at the castle.  It was possibly sold back to the Bourke’s during the mid-fifteenth century as in 1574 Richard Mac Davy Mac Parson (Bourke) was listed as the owner. Sir Richard Bingham ratified The Indenture of Composition of Mayo at this site.  Several Mayo chieftains submitted to his authority during 1588.  William Bourke who was known as the ‘Blind Abbott’  also Justin Mc Donnell chief of the Clandonnell Gallowglass were among the first to submit.  The large hole at the top of the remaining wall is due to cannon ball fired by the French to the British circa 1798.  In O ‘Donovan’s Letters of 1838 the following account was provided that ‘In this parish stands in ruins the castles of Doonamona (Dun Na Mona) and Gwesdian, (pronounced Gweeshadan) which we find recorded in the Annals of the Four Masters at the year AD 1592, as having, together with other castles, been taken possession of the governor Sir Richard Bingham.’   Also it recorded that ‘Those Bourkes who were leagued with the Mac Williams aided by all their adherents, took up arms to defend themselves, of which the governor, Sir Richard Bingham, had no sooner heard, than he proceeded into the County of Mayo and took possession of all the towns, whether uninjured or ruined, that were in the country, namely, Dun Na Mona, Cuil Na gCaiseal, Gaoisdeach and Cluainin.’  The Bourke’s attacked the governor at Cuil na gCaiseal but they encountered severe injuries.  One of the last to submit to Bingham was Edmond De Burgo of Castlebar or ‘Eamonn na Feasoige’  with disastrous results of a trumped-up charge held at Donomona that unfortunately led to his execution.  Bingham confiscated the castle with the Castlebar estate.  (Brian Hoban: later updated during  October 2005 by Heather & Corine Kelly) [i]

This Donomona Castle in County Mayo was originally a Bourke stronghold.  During the early fifteenth century the O ‘Kellys of Ui Maine occupied the castle.  Richard Mac Davy Mac Parson (Bourke) was listed as the owner during 1574.  The Indenture of Composition of Mayo 1585 was ratified at the castle by Sir Richard Bingham.[ii]

Houses like these were referred to as a ‘£10 Castle’  because a grant of ten pounds was provided to construct those particular type of castles by Henry VI of England circa 1429.  This castle was originally a Bourke stronghold.  During the early fifteenth century the O ‘Kelly’s of Ui Maine occupied the castle.  By 1574 Richard Mac Davy Mac Parson Bourke was listed as the owner.  The Indenture of Composition of Mayo was ratified by Sir Richard Bingham at Donomona castle.  Most of the Mayo chieftains surrendered to his authority during 1588 with William Bourke of Belcarra (known as The Blind Abbott) also Justin Mc Donnell chief of the Clandonnell Gallowglass among the first to submit.  It was reported that over twelve people were hung at the castle.  Eamonn Na ‘Feasoige’ (Edward de Burgo) was condemned at Castlebar following a mock trial at the castle.  Visible now are the remains of possibly a four-storey building that was constructed from both large & small, undressed limestone blocks with mortar.  There are remains of a spiral stairs in the north-east & south-west walls.  (Sources Leo Morahan; Brian Hoban & Pat MacLaughlin) [iii]

An historical building in the Clogher area was Donomona Castle.  Dated from the fifteenth century was once owned by the powerful Bourke clan.  Due to several warring factions the castle deteriorated during the seventeenth & eighteenth centuries. [iv]

According to this site a mock trial was held at Donomona Caste that resulted in the execution of Edmond De Burgo (Eamonn na Feasoige) during 1574.  His estate was confiscated by the governor of Connaught George Bermingham. [v]

A publication by Samuel Lewis 1837 referred to Donomona Castle as: ‘A topographical dictionary of Ireland: comprising the several countries, cities, boroughs corporate, market, and post towns, parishes and villages…:With an appendix describing the electoral boundaries of the several boroughs as defined by the act of the 2d. and 3d. of William IV.’   [vi]

Donomona was the ancient demesne of the Blake family during 1868. The National Gazetteer of Great Britain and Ireland-1868. (Transcribed during 2018 by Hinson Colin) [vii]

Donomona Castle was the ancient family seat of the Blake’s who later occupied Ballinfad house. [viii]

Donomona Castle played a central part in the Clogher area history of County Mayo.  It was originally a Bourke stronghold, an image of castle features on this link; https://www.pinterest.ie/pin/476466835551256706/