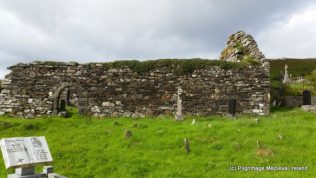 This site refers to the pilgrimages in Kilgeever: it features several images of a holy well, crosses, church ruins. (Nugent  Louise) [ii]

Known locally as ‘The Abbey’  Kilogeever medieval church was a multi –  period church.  A parish church was constructed on an earlier patrician church site.  Several theories referred to the origin of Kilgeever: (1 ) from the Irish Cill Chaobhair ‘The Near Church ’ (2 ) or derived of ‘Cill Iomhair’ or ‘Church of Iomhair.’  The restored building had a narrow round – headed twelfth century window in each gable.  The arch of the south doorway was dressed in pock – marked stone.  Two aumbries at the interior’s eastern end included votive offerings placed on them.  Discovery map 30 L8363 8070 (May 2017)  Coordinates are longitude 9. 45 53 W, latitude is 53. 45 47 N.  Images feature on this site by Jim Dempsey. [iii]

Kilgeever Abbey or Cill Chaobhain is now a ruined unroofed church.  Constructed on the site of an earlier patrician church during the twelfth century.  Local legend believed St. Patrick visited the site during 460 AD.  The route from Crough Patrick to Caher Island used the site as a pilgrimage station during the past.  The abbey itself was rectangular shaped.  It included a round – headed window also two niches to store vessels on its eastern side.  A fifteenth century door had a pock – dressed arch with a draw bar hole locked by a beam.  [iv]

Situated on Kinknock slopes approximately three kilometres outside Louisburgh town in Co. Mayo is Kilgeever or Cill Ghaobhair.  Local traditions suggest that Kilgeever is the anglicized version of ‘Cill Iomhair.’   Ordnance Survey Letters 1838 translated the name as St. Geever’s church.  Louisburgh manuscripts essays 1737 /38 (Corlette C. 2001 page 130 ) reported that ‘Kilgeever – according to the interpretation of most people means ‘the windy church’.   No physical remains of the original church above ground are visible just the abbey ruins.  [v]

Kilgeever Abbey is a little unroofed church constructed on an earlier patrician church site during the twelfth century.  St. Patrick visited the area during 460 A D. It is a pilgrimage station on the route to Caher Island from Croagh Patrick.  The rectangular shape has a round – headed window on the eastern gable.  This was a fifteenth century church with a pock – dressed arch with a draw – bar hole & a beam door lock. [vi]

A church was founded by St. Iomhair following the visit of St. Patrick to the area.  The present abbey ruins date from the twelfth or thirteenth century.  Several images of the graveyard feature by Rev. Fr. John Mustier on this site. [vii]

Located on a hill approximately fifty metres east of abbey gable is a medieval cross slab.  A Greek style cross is outlined on lower half of the south face.  Two seven – foot cross slabs that had ‘V’ – shaped inscriptions have been removed from the site.  Images of graveyard feature by Jim Dempsey.  [viii]

Within the graveyard are slabs carved with crosses that dated to the seventh century.  Beside the graveyard’s entrance is the ‘Tabar Ri Dhomhnaigh’ or ‘Our Lord’s Well of the Sabbath.’  [ix]

Within Kilgeever graveyard are three early medieval cross slabs, one with an outline of a Greek cross.  [x]

Two walls with a gable still stand with a height of five feet.  Two window apertures also one door remain of the abbey ruins. (the door had been hung with a stone – hinge )  The building had been divided into two halves with accommodation for the monks of the monastery & the church.  An underground passage or tunnel as an escape route was in place from the building to Ballyhip.  (transcribed by Thomas J. Murphy from Schools Collection Vol 0137 page 006 )  [xi]

Within the graveyard are two slabs that date back to the seventh century carved with crosses. [xii]

(B ) This second stone was a long deep pillar stone located on the graveyard’s higher ground to the north – east.  Its neatly cut also the excised lines were almost ‘V ‘ – shaped in the cross section. The stone appeared to have been made from slate or siste.  The measurements were 16.3 cm in width on its front face & 15.5. 13 & 16.5 cm on the upper plain side.  It stood about ninety centimetres above ground level but may have been over one metre 1.30 cm in total.  The cross measured 23.8 centimetres in height & was twelve centimetres in width.  Possibly the stones were erected from the era of sixth or eight centuries up to the late ninth century. (Higgins J. G. & Gibbons M.  Early Christian Monuments at Kilgeever  Co. Mayo ) [xv]

This holy well is located at the northwest corner of the graveyard that surrounded the medieval church.  Local folklore referred to St. Patrick’s intention to build a church in the area then sent his disciple St. Iomhair to complete the building.  Traditionally pilgrimages occurred on 15th July the Feast of the Apostles or on Sundays.  The ordnance survey letters 1838 referenced a patten held on 15th July.  Listed as ‘Toberreendoney’ on the first edition 1839 ordnance survey map.  The ITA Files 1944 stated that pilgrimages to the holy well occurred from 15th August to the 8th September.  Numerous images of holy well feature at link. [xvi]

A penitential structure that exists in Kilgeever is referenced on this site. [xvii]

Kilgeever holy well is part of the Clew Bay Heritage Trail.  Beside the graveyard’s entrance  is the spring well known as ‘Tabar Ri Dhomhnaigh.’  Stations of the cross were undertaken on the Feast of the Apostles on June 15th annually.  Several pilgrims inscribed crosses on rocks nearby.  Prior to leaving the holy well they were invited to pray for the soul of Henry Murphy of Castlebar who had a cross erected at the site. (Mary O ‘Malley 25th June 2011 ) [xviii]

Beside the graveyard entrance is the holy well called ‘Tabar Ri Dhomhnaigh.’   An annual pilgrimage occurs on 15th July the Festival of the Apostles. [xix]

A well – known photograph of pilgrims at the holy well is among the Wynne Collection of 1890’s. (it features in an article on page 33 )  A wooden plaque at the site provides instruction for the pilgrims (fig 7 page 37 ) [xx]

A holy well is situated in Kilgeever graveyard named after St. Iomhair. [xxi]

Several images of the old Kilgeever Abbey from 6th May 2001 with graveyard feature on this site: http://www.connorsgenealogy.com/Mayo/louisburgh.html

Doorway at Kilgeever Abbey may be viewed at this link: http://www.louisburghrentals.com/local_scenery.html

Kilgeever is in the electoral division of Louisburgh, within the civil parish of Kilgeever in the barony of Murrisk.  The Irish name is ‘Cill Chaobhair.’   A map with these locations 53 45 39 N, 9 46 1 W may be viewed at: https://www.townlands.ie/mayo/murrisk/kilgeever/louisburgh/kilgeever/

Kilgeever Abbey has a church that includes a pilgrimage station in the surrounding graveyard. (Eileen Battersby 6th August 2003 The Irish Times) The article may be viewed at this link: https://www.irishtimes.com/culture/following-the-clew-trail-1.368669

Several images of Kilgeever graveyard feature at this link: https://www.findagrave.com/cemetery/2301334/kilgeever-cemetery

A map with several images of ruined church & graveyard may be viewed at this link: http://www.louisburghrentals.com/local_scenery.html

Publications that refer to Kilgeever structures include the following:

Kilgeever Abbey with holy well is referenced on this site: https://www.louisburgh-killeenheritage.org/places/landmarks/kilgeever-holy-well

Information on Louisburgh history & Kilgeever church  may be viewed at this site: http://homepage.eircom.net/~kilgeever/history.htm