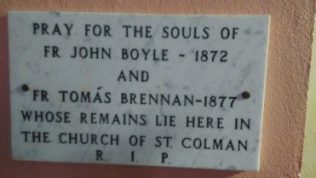 Mayo is known as the “plain of the yew trees” and is one of the most important monastic sites in Western Europe. Mayo Abbey was founded by St Colman in 668 AD.  It was founded for Saxon monks and is known as “Mayo of the Saxons.  It was a centre of learning for centuries bringing students from all over Britain and Europe.

County Mayo got its name from this monastic settlement and it has connections with Inisboffin, in Connemara, County Galway and Lindisfarne in the north east coast of England.  St Colman travelled from Lindisfarne and founded a monastery on Inisboffin island before making his way to Mayo Abbey to establish a monastery there.

The Old famine church was built during the famine of the 19th century and stands disused in Mayo Abbey now because a new church of St Gerald was constructed in the 1970s in Mayo Abbey further down the village.  This church was opened in 1979 by Bishop Joseph Cunnane of the Tuam diocese.  It’s a modern glass elevated structure that can be seen from a distance.  The old famine church was opened in 1845 on the eve of the great famine.

My ancestor Richard Boyle was the first person to be buried outside the old famine church in the 1840s and the writing on his tombstone is still legible.  His tombstone was erected by his son, Fr John Boyle who was the parish priest on Inisboffin Island, County Galway.  A plaque is erected to Fr John Boyle who died in 1872, on Inisboffin at the alter in the present church of St Colman on the island.  Both Fr John Boyle and Father Sean Brennan are interred in the present church which was opened in 1910.

Mayo abbey has connections with Iona in Scotland, Kells and the French coast of Charlemagne.  In 1152 the Synod of Kells named Mayo Abbey as the seat of the Diocese of Mayo.  Bishop Patrick Healy was the first Irish bishop to die for the faith, executed in 1579.  In the 16th century Mayo Abbey gave its name to County Mayo. Mhaigh Eo is the old Irish name meaning “plain of the yew tree” (museumofmayo.com)

St Colman was educated in Iona in Scotland and was the 3rd abbot of Lindisfarne.  He was born in the west of Ireland and he resigned when the Synod of Whitby decided to calculate Easter using the roman method instead of the Celtic method.

He sailed back to Iona and then to Inisboffin with his English and Irish monks, followed by more disputes.  He moved with the English monks to Mayo where he died (megalithicireland.com)

Mayo Abbey and the Currach

The venerable Bede was a historian of the early medieval English church and Bede documented that mayo abbey monastery was found over the calculation of the date of Easter in the 7th century.  That is why St Colman or Bishop Colman left Lindisfarne.  He settled on Inisboffin but came to Mayo Abbey to the area known as Kilcolman or church of Colman and came to own 1000 acres. It is said that they may have sailed in a currach from Lindisfarne to Inisboffin. This theory was tested to mark the anniversary of the death in 597 of St Columba from Donegal.

The staff of Kilmartin House trust in Scotland made a currach in Mayo Abbey in 1997.  It was made of 6 types of wood covered in cured hides.  It sailed from Co Antrim to Argyll in Scotland and then to Iona.  It was a success (Meehan, 2003).

Mayo as a diocese

The see of Tuam in County Galway became an archdiocese when the synod of kells organised the diocese in Ireland in 1152.  Mayo became a diocese spanning from Claremorris to Achill.  Adam McGauran was maybe the last bishop of the diocese.  He was slain in 1593 by troops of Sir Richard Bingham, Lord President of Connaught.  By 1632 the diocese of Mayo merged with Tuam Augustinian monastery.

In the 15th Century, an Augustinian monastery was founded in Mayo Abbey site as they had the monetary means under Elizabeth I, but the monastery was dissolved into secular hands.  Eneas McDonnell (1783-1858), a catholic politician wrote of the destitution of the mayo abbey people and no funds for a new church.

On the eve of the great famine, a new parish church was built from the ruins of an earlier building and with assistance from abroad was consecrated in 1845 (Meehan, 2003).

In 665 AD, St Colman left Lindisfarne and set sail via Iona to Inisboffin Island in Connemara, County Galway.  He set up a monastery here and the remains of the church are still here today including a Bullaun stone and 2 holy wells. The present-day ruined stone chapel was used up until 200 years ago.  The original structure was burned by a John Darcy, a lord Justice who sailed here in 1334, sailing the western seaboard burning and looting.

There is a well dedicated to St Flannan whose association predates St Colmans.   Inisboffin Island is divided into the west quarter and the east quarter. The east quarter has award wining beaches with white sand, unspoilt beaches and has carribean crystal clear water.  There is the townland of Knock on this side.

The monastery was on the east quarter, but long discontent arose between the Celts and the Saxons and St Colman took his English monks to County Mayo and set up a monastery in Mayo Abbey. He died there in 674 AD (earlychristianinisboffin).

On the west quarter, its more rugged and St Scaithin had a settlement there. The islands laid beyond Norman influence and were held by the O’Flaherty and O’Malley sea lords. Trading and raiding wee the maritime pursuits, along the western seaboard. There were four churches on Inisboffin and in the 14th century, a church was built on the ruin of the original one by St Colman.  It has early Christian slates, medieval graves and bullaun stone.  A bullaun stone is a cursing stone with an impression made by water over time.  A person could have a curse lifted by placing their hand inside the stone on the impression.  There is also a cursing stone on Inishark island across the channel of water from inisboffin Island(megalithicireland.com).

The Cromwellian fort stands on a rocky headland on the eastern side of the entrance to Boffin harbour.  It was built by Cromwell forces using local stone in 1656.  It’s a 32-metre-long bastioned fort supposed to have been built on a previous fort called Bosco’s Castle.  A detention centre for catholic clergy before transportation to the West Indies was what it was used for(megalithicireland.com).

The English statute of 1655 declared priests guilty of high treason.  After the restoration of Charles l to the throne in 1660, the fort was used as a defence strategy during the Jacobite war, when Irish forces held out until after the battle of Aughrim in 1691, when they surrendered to the Williamite forces.  Their interest in the islands were to watch French pirates who often took refuge in these natural harbours(inisboffin.com-cromwellsbaracks).

Inisharrk island is not far from Inisboffin separated by a dangerous stretch of water.  Its uninhabited since 1960 when the remaining inhabitants moved to Cleggan Island on the mainland.  There was no pier on the island and access was governed by the tides.  Residents could be stranded for weeks during bad weather.

St Leo founded a monastic settlement here and I was lucky enough, 2 years ago to get on to the island by express boat from Inisboffin Island. The island now is full of the ruins of houses and a ruin of St Leo’s church and a school. Traces of a medieval church are located within the main church. There is a small holy well near Faigh Leo (narrow inlet) called Tobar Leo (inisboffin.com-monastic sites).

In October 1960, the last of 6 families left Inishark, 9 miles from Cleggan for a life on the mainland.  The oldest inhabitant was 73 years old and his name was Thomas Lacey.  He refused to leave, and he walked the island several times and went home and set 3 places at his table.  He set the table hoping his two sons who were drowned at sea between inisboffin and Inisturk in 1949 would come home but they were never found.  They were coming from mass on Inisboffin Island on Easter Sunday.  Thomas Lacey left the island the following day for the mainland never to return.  He was known as the father of Inishark.

Inishark is rugged and harbourless with gigantic waves that made its inhabitants prefer to be isolated and without food for weeks than to risk their lives in the channel.  Letters were written to Bishop Walshe of Tuam at the time and then to Michael Moran, Minister for lands.  The building of the homes on the mainland happened but the islanders would have preferred a new pier, but the government wouldn’t do that, so the islanders had to leave their way of life and move to Cleggan.

Now it’s called ‘The Forgotten Island’.  The Shark fishermen on the island could see a bad weather front coming in off the Atlantic so they were not lost in the Cleggan disaster which claimed the life’s of 25 men in 1927, but there was no way of telling that to the men on Inisboffin at the time because there was no communication.

Dances were held by candlelight in the schoolhouse to celebrate the return of an exile on Inishark and there was a barrel of porter in the corner and the sound of pounding feet on the wooden floor to dancing a half set.  They used paraffin lamps for light and when the paraffin ran out, they melted lard on a saucer and put a wick into it to light it.  One of the residents never settled on the mainland.

The island is a very forlorn place now and the derelict cottages provide shelter for the sheep. If it hadn’t been evacuated, it would have been a living island equipped with proper landing facilities, hilipad, electricity, and phone links. Inishark had its own culture according to the grandson of Thomas Lacey, Peter Corrigan and depended on mother nature.  Weather tides, and illness drove them to the mainland.  There is a plaque on Inisboffin to the memory of those who died at sea (Irishtimes.com-returntoforgottenisland).