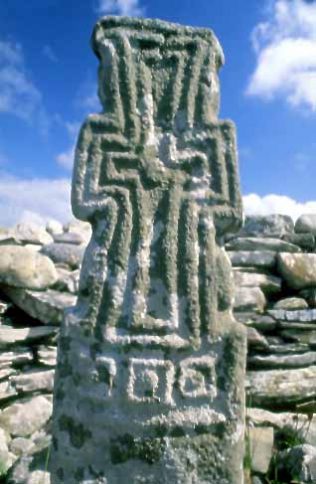 The uninhabited island of Caher is situated between Clare Island & Inishturk.  It was believed that a hermitage existed on the island during the seventh century.  This island contains several interesting archaeological remains that include cross slabs, hermitages also a church.[i]

The small Caher Island or ‘Chathair na Naomh’  also known as ‘Cathair Phadraic,’  ‘The isle of saints’  or ‘St Patrick’s Isle’-  it is now uninhabited.  The island has just one hundred & twenty-eight acres.  It is situated between Inishturk & Clare islands also six miles southwest of Roonagh pier.  The island was regarded as St. Patrick’s furthest excursion in the west of Ireland.  Three sites are named after the saint: a circular stone fort, a church within a circular cashel also a flat stone just outside the church door that is named ‘Leaba Phádraic’  or ‘St Patrick’s Bed.’   On Caher Island are ruins of an early Christian monastery: possibly monks of St. Columba resided there dated from approximately the sixth or seventh centuries AD.  A primitive chapel was constructed within an enclosure with a series of decorated crosses & inscribed stones on the site.  The altar stones inside the church were believed to have be blessed with special powers.  The Croagh Patrick pilgrimage (on the last Sunday in July) originally included the performance of the stations of the cross at both Caher Island & Kilgeever.  On 15th of August annually a pilgrimage to the island is held.  The island is accessed by boat from Inishturk. Among County Clare’s fishermen the island was reputed to be one of the holiest islands of Connaught along with Inishglora in Mayo & Macdara in Galway: in the past sailors lowered their sails then said a little prayer whilst sailing closer to the islands shoreline. [ii]

Caher Island or Oilean Na Naomh is situated approximately five miles from Roonagh Point. On the 15th of August the Feast of the Assumption annually the Caher Island pilgrimage in Clew Bay occurs.  Remains of buildings & monuments dated from the seventh or eighth centuries to medieval times on the Island.  The pilgrimage mass is celebrated in Irish within Teampull Padraigh ruins of the twelfth century church.  A holy well high in the hills is also visited.  A prayer is recited in Irish as Umhluimid do Dhia mhor na huile chomhachta agus do Phadraig miorbhuilteach, (We make reverence to the great all-powerful God and to Patrick the miracle worker)  A slab known as Leabaidh Phadraig is credited with curative powers.  On the altar of the ruined church is Leac na Naomh a cursing stone.  Included in several monuments is a seventh century hammer-head cross.  (Noel O’Neill of Mayo Historical & Archaeological Society 29th Dec 2003) [iii]

During 2004 a pilgrimage to Caher Island in Clew Bay approximately two hundred pilgrims travelled from Roonagh quay to Caher island for the annual pattern on the feast day August 15.th   Visitors from Ireland, Europe also the U.S. attended the celebration of mass within the medieval oratory’s ruins.  Celebrant was Fr. Michéal Mannion.  Caher Island is a veritable open-air museum dated back to early the Christian era.  It has been neglected by the authorities with the remains of the oratory in grave danger of collapse.  (MHAS Mayo Historical & Archaeological Society 16th Aug 2004) [iv]

The small island of Caher is of major historical importance according to Dan MacCarthy. Roonagh Quay is eight kilometres in the southwest of County Mayo from Caher  Island where pilgrims depart for the pattern.  As there is no actual pier the boatmen anchor in the east of the island then travel ashore a small punt.  Caher or Cathair na Naomh translates as the ‘City of the Saints’: it covers one hundred & twenty – eight acres.  It was believed to have been the most westerly point of St. Patrick’s travels on his Croagh Patrick pilgrimage during the year 440.  Passing sailors were believed to have dipped their sails on passing the island then invoked St. Patrick’s protection with the prayer ‘Umhluimid do Dhia mhor na huile chomhachta agus do Phadraig miorbhuilteach’,  ‘we make reverence to the great god of all the powers and to St Patrick the wonder – worker.’  This island supported a small community of monks during the seventh & eighth centuries.  Caher Island is part of a circuit where pilgrims celebrate the feast of the Assumption.  On the island are remains of a small church within a cashel, the remains of a stone fort also a flat stone at the entrance to the church known as Leaba Phádraic.  A cursing stone on the altar is known as ‘Leach na Naomh.’  Dolphins are represented on one of the fourteen Christian slabs on Caher with representation of a Greek cross on the same slab.  (Dan MacCarthy in Caher under umbrella of faith.  The Irish Examiner 23rd April 2018)  [v]

Caher Island also known as Oileáin na Cathrach, Cathair na Naomh or Cathair Pádraig. The names originated from a stone rampart that enclosed monastic remains above one of its two natural harbours at Portatemple.  Caher is a rocky outcrop that lies between the southern tip of Clew Bay also Inishturk.  It marks the sea end of Bóthair na Naomh up to the summit of Croagh Patrick then down towards the Atlantic.  Archaeological discoveries recorded ancient religious rituals across centuries on Caher Island.  Medieval pilgrimage ‘round’  or circuit sites have been identified.  Recent fieldwork has identified an outer arc of altars or ‘leachts’  also a second or larger pilgrimage circuit on the south & west sides.  According to archaeologist Michael Gibbons this island was abandoned during 1838.  Material collected in the 1940’s by Brian McLoughlin of Cleggan in Connemara (Archives of the Irish Folklore Commission) described several pilgrimage stations.  He also used aerial photography.  Gibbons stated that ‘the entire round’ represents a now rare example of a form of religious devotion stretching back at least a millennium on Ireland’s Atlantic coast.’  He believed that Caher’s ecclesiastical complex developed over several phases that included a late medieval chapel with a series of stone crosses as pilgrimage sites.  A holy well survives towards the northern part of the island. (Lorna Siggins The Irish Times  24th December  2013)  [vi]

Caher Island is a small one hundred & twenty-eight acres uninhabited place.  This site states that early monks set up scriptoriums on  several islands, they also preserved the ancient texts.  It is where it is conjectured that ‘civilization was saved’.  They erected massive stone crosses also carved elaborate burial slabs.  This island has an early Christian monastery within the remains of a chapel in an enclosure also several carved slabs & crosses.   A small chapel with its altar table also its cursing stone & prayer stone held pilgrims’ offerings for eons.  Sixth or seventh century hermitages were possibly inhabited by monks of St. Colmcille.  Several penitential stations are scattered across the Island.  Several excellent images feature on this site with a map of the area.  A description of the Caher Island artifacts was read on 27th November 1900 by T. W. Rolleston then published as The Church of St. Patrick on Caher Island, County Mayo.  [vii]

On Caher Island an early Christian monastic site has remains of a chapel within an enclosure that includes several carved slabs.  Possibly the hermitage sites date from the seventh century.  Monks or followers of St. Colmán were remembered on the neighbouring  Inishbofin island. (Corlett C. 2001)  One of the slabs has a thick rectangular block of sandstone 42.5 cm. in height.  It is decorated with a very plain Latin cross inside a frame.  (These are similar to the small cross-inscribed stones that stood at the heads of graves of Lindisfarne also Hartlepool) (Henry, 1947)  This monastic site number is SMR Mayo 94 006. (Mayo 16)  National grid reference is 066270 east,  275630 north.  Map (1:50000).  Ordnance Survey Ireland discovery series 37.  Images on site feature from Corlett Christiaan.   [viii]

Caher island is a small uninhabited island with approximately one hundred & twenty-eight acres.  This island was also known as Oileáin na Cathrach, Cathair na Naomh or Cathair Pádraig.  It is situated halfway between Inishturk island also Ronnagh pier off the Mayo coast: https://pilgrimagemedievalireland.com/tag/caher-island/

Caher Island contains the ruins of a small early monastic site & several decorated early medieval cross slabs.  According to tradition the island is at the end of a mythical road called Bóthair na Naomh or Saint’s Road that ran across the sea up to the summit of Croagh Patrick. In past centuries, a complex series of pilgrim stations existed on the island but today devotions on Caher Island are focused on the site of the small rectangular stone church. Within that church is a small altar with a cursing stone ‘Leac na Naomh.’   A large leacht in front of the east gable is now in use as an altar.  Several pilgrims visit Tobar Mhuire or Mary’s Well on the northern side of the island prior to celebration of  mass.  This pattern day or pilgrimage is an integral part of the annual Croagh Patrick pilgrimage (last Sunday in July) as it is believed that the pilgrimage is not completed until the mountain has been climbed with a visit to Caher Island on the 15th of August. [ix]

Caher Island or Cathair na Naomh is an uninhabited island off Mayo’s coast.  It is situated between Clare Island & Inishturk.  On 15th August annually  a pilgrimage to this monastic site is undertaken.  The remains of monks hermitages from the seventh century survive on the land.  Caher also has an early Christian monastery with the remains of a chapel within an enclosure with several carved slabs.  Coordinates are 53 43.3 N, 10 1.38 W. [x]

Publications include the following:

Francoise Henry The Antiquities of Caher Island  1947 published in Journal of the Royal Society of Antiquaries of Ireland: https://www.jstor.org/stable/i25510596

Rolleston T. W. The Church of St. Patrick on Caher Island, County Mayo  1900 published in The Journal of the Royal Society of Antiquaries of Ireland  fifth series vol. 10 (pages 357 –63) This may be downloaded at this link: https://www.jstor.org/stable/25507092

A Facebook page references subject at this link: www.facebook.com/michaelgibbonsarchaeologytravel

These links may be of interest: