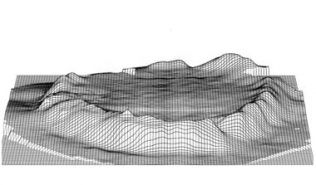 Ringforts were usually circular in shape; they were situated on high ground.  Farmsteads were enclosed within a large circle.  Homesteads were located in a small area to enable greater shelter for the family’s animals.  Ceathru na Lorgan Ringfort near Westport is an excellent example of the early Christian settlements from 500-1000 A D.  Carrownalurgan Ringfort has a notable feature of a dressed limestone slab (a grave) with a Latin inscription: ‘Orate Pro Amina Petri Brown Qui Me Fieri Fedic A D 1723.’   The last Catholic Marquis of Sligo of Westport House Peter Brown (interred in this site ) was evicted by his son when he converted to Protestantism. [i]

Circular in shape the farmsteads were enclosed by an earthen bank (Raths or Lios) or by a stone wall. (cashels, duns & cahers)   Houses would have been in a small area of the fort.  Possibly most of the area was used for sheltering animals at night or in wintertime.  Carrownalurgan Ringfort is situated on a ridge to the right of the Westport to Louisburg road.  The site dates from 500-1000 AD.  The diameters are thirty-eight metres north south by thirty-six metres  east west.  Ringfort was located at the ridge’s highest point.  A limestone slab was possibly an altar stone.  It dated to 1723: it was carved with a Latin inscription to requested the wayfarer to pray for Peter Browne’s soul. [ii]

Eileen Battersley reported in an article titled Following the Clew Trial  in the The Irish Times  6th August 2003 that the Clew Bay Archaeological Trail was to be officially launched on 1st September that same year.  Carrownalurgan ringfort is situated on a ridge to the right of the Westport to Louisburgh road.  A limestone slab may possibly have been an altar stone.  Dated 1723 it requests the viewer to pray for the soul of Peter Brown. [iii]

Ráths may be classified as a space frequently surrounded by a bank or fosse.  According to O ‘ Riórdáin 1987 they were a form of protected homesteads.  Lucas stated  they likely were built to repeal the cattle raids of the early Christian period throughout Ireland.  The name Carrownalurgan translates as the ‘quarter of the elongated Hill or Ridge’  (Morahan  L. 2001)  Carrownalurgan ringfort is a classic ráth located on a Drumlin.  Its broad earth bank or stones varies from five metres to 7. 3 metres at the base.  The construction included a fosse that measured four metres in width also 0.4 metres in depth.  This ringfort is privately owned. Location grid reference is 0989150 E, 28341 N. [iv]

Carrownalurgan ringfort or Cathruí na Lorgan meant ‘Quarter of the Low Long Hill.’   It was located on the right-hand side of the Westport to Louisburg road.  It was an excellent example of an early Christian settlement.  Classed as an univallate rath with crest to crest diameters of thirty – eight metres north south by thirty-six metres east west.  It was originally regarded as a place of worship in the penal days.  A reference to an old church access from the road to the fort is featured in an article in the History of Mayo  vol 1 (Knox) (page 204)  One notable feature of this fort is a dressed limestone slab carved in high relief with a Latin Inscription that stated ‘Orate Pro Amina Petri Brown Qui Me Fieri Fedic A D 1723’  (English translation was ‘Pray for the soul of Peter Brown whom this was erected in 1723’ ) Peter Brown was the local patron who was son &  successor of Colonel John Brown of Westport: a lawyer & officer in King James’s army that was defeated at Limerick during 1691.  (Edel Hackett) Clew Bay Archaeological Trail: exploring 6,000 years of Mayo’s Heritage .  [v]

Irish ringforts were usually circular settlements built from the Bronze Age up to 1000 A D.  They were constructed with stone or earth also the enclosures included a house inside. Earthen ringforts had a mound on a circular rampart with a stakewall. [vi]