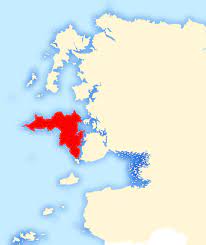 The basement rocks of Achill & Curraun peninsula are the oldest in Ireland.  Dated to the pre-Cambrian era & formed over six million years ago.  These rocks consisted primarily of schist, gneiss also quartzite.  The rugged mountain peaks consisted of quartzite with schist dominant in the lowland valleys.  The last glaciation of Ireland i.e. the Midlandian ended over ten thousand years ago.  There is a fine example of a corrie or cirque at Lough Acorrymore with an impressive hanging valley lying directly above it.  Lough Bunafreeva west is another corrie lake situated on the edge of a steep cliff on the western side of Croaghaun Mountain at three hundred & fifty metres above sea level.  It is believed that submergence or a rise in sea level was responsible for the separation of Inishbiggle from Achill sland with the creation of a narrow channel at three hundred metres wide. Cloughmore, Achill Beg also the south – western section of the Corraun peninsula were once joined together but separated when the Atlantic cut its way through the unresisting rock thus Achill Sound was formed. [i]

A range of detailed paleo environmental analyses was carried out on a series of three peat profiles from Achill island revealed evidence of an extreme climatic event (probably a storm or series of storms ) circa 5200-5100.  That caused the deposition of an extensive layer of silt across the blanket peat.  It was followed by a period of relatively dry climate during which the Neolithic communities expanded within the region.  A subsequent period of continuing dry conditions allowed extensive colonization of the peat by Pinus before a shift to wetter conditions characteristic of the later Holocene.  The extreme climatic event is possibly linked to human abandonment of the area. (2005 John Wiley & Sons, Ltd ) [ii]

On the western Ireland mountain range the upper limit of glacial evidence descended from seven hundred & thirty metres in the Connemara Mountains to four hundred metres on Achill island.  This limit was interpreted as a trimline that marked the upper limit of erosive, warm – based ice thus it implied that higher summits remained above a former ice sheet as nunataks or supported a cover of cold-based ice.  Greater representation of gibbsite in soils above the trimline indicated that it related to the last glacial stage.  Reconstruction of the minimum altitude of the LGM ice surface implied inland ice was diverted north westwards by an ice dome on the Connemara Mountains then extended at least twenty-five kilometres offshore. [iii]

The western Caledonian province is a continuation of the Caledonian north-west.  It includes hard, rounded, quarzitic peaks underlaid by pre-Cambrian rocks.  Where this hard rock met the Atlantic Ocean: it created spectacular sheer cliffs also fjord-like Inlets.  Almost all the soil was scraped away in the Ice Age.  Region now consists of barren rock, bog & small lakes: https://www.wesleyjohnston.com/users/ireland/geography/physical_landscape.html