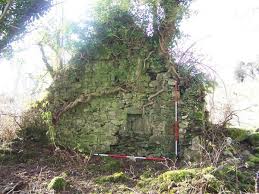 Dr. Yvonne Mc Dermott published an excellent article, entitled Bofeenaun Friary: History and Architecture of a late Medieval Religious House.  She reported that the Bofeenaun Franciscan Third Order Friary was situated in the townland of Bofeenaun to the west of Lough Conn also to the west of Levelly Lough in Mayo.  Flanagan & Flanagan 2002 (183) stated the placename referred to ‘Both Faonáin‘ &  ‘Faonán’s hut.’   Extracts from her article stated that Knox referenced during 1904 (297) that the church itself ‘is not large’  also that ‘the east window is of late date.’  He listed that Bofeenaun was a conventual house of the Franciscans First Order.  However other authors that included Mooney 1958 (59, 60) Gwynn & Hancock 1988 (268) also Blake in 1928 (29, 27) reported that it was a Franciscan Third Order house.  The partial remains of the friary consisted of a western gable, a short or low section of masonry to the west of the site & north-east of the gable.  A section of the north wall survives to a low height.  There is an annexe & rectangular plan to north of that wall that also adjoins the west end.  (see Fig 2)  The article included several images with sketches. (Dr. Yvonne Mc Dermott) (no.35 pages 39-48 ) [i]

In his article Lough More, Bofeenaun, Co. Mayo  Christy Lawless stated that Bofeenaun was named Both Faonáin, Faonán’s Booth, Tent or Hut from the Ordnance Survey Field Books, County Mayo, Book 4 1838  for the parish of Addergoole-barony of Tirawley.  The townland is situated within the centre of Addergoole parish, it is four kilometres south of the village of Laherdane. (O.S. 6-inch sheet numbers 47 & 59)  Archaeological ruins of Bofeenaun abbey are located to the south of the townland. (SMR. MA047 – 042) (Christy Lawless) (no. 12 page 13)  [ii]

J. F. Quinn (page 5) stated with this publication that ‘in the reign of James (1603-1625) circa 1608 AD the house and lands attached to Bofeenaun Abbey were confiscated.  The Inquisition discovered that the Prior of Bofeenaun was possessed of four quarters of land of 120 acres each (Plantation Measure)  Knockmaria Abbey would have been a centre of religion in the early years with the Bofeenaun Abbey a later foundation.  In the Letters of Ordnance Survey 1838  it was stated that ‘In the parish stands in ruins, Bofeenaun Abbey, Both-Faonan, the remaining edifice of which is 21 yards long x 9 yards broad, south-east & north-east sidewalls remain.  On the north west sidewall, near the south west gable is an opening (originally an entrance), four feet wide.  There is a breach (originally a doorway), on the south-east sidewall near the north east gable.  On the south west side-wall, near the north-east is a window no more than 2 feet high and a half a foot broad.  On the east gable there is a window of cut stone which is about 5 ½ feet high by 2 feet broad, of quadrangular form.  To the south of this ruin stands a gable of another edifice, and about 10 perches north east of it is a well called Tobar na Ministreach, the Well of the Monastery, at which stations were heretofore performed on Saturdays. (page 104)   Rev. Fr. J. F. Lavelle penned over one hundred years ago that of the abbey  ‘There are remains of dwellings as of an old church.  The latter is gradually disintegrating, and the collapse of the Southern sidewall, I have learned, dates back some 40 or 50 years ago.  The eastern gable displays an outward list, and, unless steps are taken to buttress it, it will inevitably crash  – an event to be greatly deplored.  These buildings bear all signs of great age in style of architecture and manner of masonry – in some places the walls are 3 feet thick.  The orient window is rectangular and formed of well-tooled stones.  Formally a vertical stone and an intersecting transverse divided the opening into 4 smaller ones.  The Cross, thus formed by the perpendicular and transverse stones, was dislodged by lightenings destructive career.  There are at the standing edges of this gable some finely fitted blocks that, after all the long years, give evidence of symmetry in the positioning as barges.  Several Holy Wells are adjacent to the Abbey Ruins.’  (page 105)  The Ordnance Survey also states that ‘Archdall in his Monastican said that under the heading ‘Bowfinan’  that there was a friary here that did not belong to the Conventual Franciscans.  Discussion continues as perhaps it belonged to Franciscan Tertiaries.  Who the founders of Bofeenaun was, or where their lands were, or how many were in the Community, or where they went to from there, are questions which so far remain unanswered.’   [iii]

This newspaper article stated that Bofeenaun was near Nephin Mountain.  It was named after the ‘both’ also the ‘hut’ of St. Finaun the founder. [iv]

Three hundred yards from the local cemetery on a slight hill are the ruins of Bofeenaun’s Franciscan Abbey with graveyard. [v]

Bofeenaun Abbey was located on the shores of Levally Lough.  It was associated with the foundation by St Finan.  It was occupied by Conventional Franciscans. [vi]

An extract may be downloaded on this site from The Franciscans of County Mayo by Fr. Canice Mooney published in The Journal of the Galway Archaeological and Historical Society vol 28, 1958 / 1959 (pages 42-62)  [vii]

Monasticism expanded from circa 432 up to the suppression of all monasteries by King Henry VIII during the sixteenth century.  The mission of the religious monks was focused on the education of the cultural or local interests of Gaelic Ireland.  Thus history, songs, sagas also historical facts were provided to Ireland’s citizens. [viii]

Several references to Bofeenaun Abbey founded by St. Finian with its blessed well nearby feature on this site. [ix]

One may view references to Bofeenaun Abbey & history of the area on this site: http://sportlomo-userupload.s3.amazonaws.com/uploaded/8593/Lahardane_Tales_1997.pdf

This site states that Bofeenaun got its name from the founder of the Abbey St. Finaun: https://www.irishtimes.com/culture/the-postmaster-s-big-idea-for-a-tiny-mayo-village-1.703720

One may download this article from Dr. Yvonne Mc Dermott at this link: https://www.academia.edu/39790120/Bofeenaun_friary_History_and_architecture_of_a_late_medieval_religious_house

This link has an image by Aoibheann Ni D of the fragmentary remains of the Third Order of a Franciscan Abbey that was situated west of Loch Conn: https://twitter.com/aoibheannnid/status/470669522446602241

[iii] Addergoole its Land and People 2000