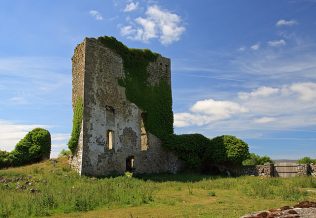 An article by Eamon Bourke, author of Burke People & Places recalled that in 1854 Thomas Lacey described this castle as ‘an old and fortified building.  Castle Bourke was constructed approximately in 1570 by Edmond Bourke’s son adjacent to the shores of Lough Lannagh in Castlebar.   Mayo Bourke families disagreed with Sir Richard Bingham with disastrous results that included the slaughter of Edmond also his relatives.  The estates were confiscated, the castle was never completed.  The ruins are visible. (Brian Hoban 28th June 2011) [i]

Sir William de Burgh ruled Connacht for fifty years.  The last de Burgh descendant ‘The Brown Earl ’ was assassinated during 1333.  Knox’s History of Mayo  (page 282)  referenced that Ballinrobe Castle with lands were possibly let by Maurice Fitzgerald’s heir to Sir William Liather or his sons prior to 1300.  Not much historical data is available of the MacWilliamships up to 1569 with the arrival on the scene of the first English Governor Sir Edward Fitton.  The former name of De Bourgh was converted to Bourke notably with the division of the 2nd Sir William / Sir Thomas Bourke’s estates in 1401.  On the demise of Sir Thomas Bourke during 1402 his estates were divided between his five sons.  According to Knox’s History of Mayo  (page 283 ) Walter received Kilmaine, Edmond (of the Beard) inherited the Castlebar estate: Turlough Parish went to Richard Bourke: Robeen to John Bourke whilst Thomas Bourke obtained South Kilmaine.  In 1543 Ulick Negan attempted to acquire all of Mayo, he had previously purchased Moyne Castle with lands in Kilmaine.  During 1570 The Lord Deputy Fitton captured nineteen castles from the Bourke’s.  Fitton described Sir John when they met to discuss a deal to forfeit lands as ‘an old man of amiable disposition, very sensible, though wanting in English yet understanding the Latin: a lover of quiet and civility, desires to hold his lands of the Queen and to suppress Irish extortion and expulse the Scots.’   Fitton decided that Sir John be created an earl with his son as a baron, but Sir John died in 1580 before the position was created.  Sir John’s eldest son William settled in Tyrawley: he was appointed sheriff of Sligo during 1582.  By 1585 William Bourke was head of the sept Walter.  In the Indenture of Compensation 1585 the Mac William descendant held the castle & manor with one thousand acres of demesne in Ballinbrobe, the castle & manor of Kinlough also approximately two thousand, five hundred acres in demesne, rent-holdings in the barony of Kilmaine, the castle & manor of Newtown (Castle Gore) in Tyrawley, lands in Carra also Burrishoole.  From 1558 to 1570 Richard Bourke was the Mac William.  (Extract from Random Notes on the History of the County Mayo with special reference to the Barony of Kilmaine by G. V. Martyn published in vol X11 of the  Journal of the Galway Archaeological & Historical Society) [ii]

The House of de Búrka was Latinized to de Burca or de Burgo.  The surname refers to an English village Burgh in Suffock that means ‘fortified town.’  The Irish branch of the Anglo-Norman noble family de Burgh began in Ireland with William de Burgh (1160-1206 ) who was a knight also an adventurer who travelled with King Henry 11 of England during 1185.  He was the elder brother of Hubert de Burgh, Earl of Kent also the judiciary in England.  William was granted lands from King John who had succeeded King Henry 11 during 1199.  William was appointed governor of Limerick & Thomond.  He was expelled during 1203 then lost his Connaught seat: his demise occurred during 1205.  He was succeeded by his son Richard who received the estate also lands at ‘Connok.’ (i.e. Connaught )  From 1228-1232 he held the Office of Judiciary of Ireland.  In turn his son Richard succeeded him then with his demise: a son Walter was granted the County of Ulster so he became Earl of Ulster.  Again, his son Richard became 2nd Earl.  During 1286 he subdued Connaught.  He deposed Brian O ‘Neill as chief native king: he spent over forty years in the area.  He occasionally participated in the British Parliament.  The Patent Records of 1290  stated that in addition to his Ulster lands he possessed several in Munster also on the Isle of Man.  The 3rd Earl (his grandson) was William (1326-1333 ) who was the son of John de Burgh & Lady of Clare.  He married a daughter of Henry Earl of Lancaster.  He was appointed Lieutenant of Ireland during 1331.  Following his demise his male kinsmen adopted Irish names & customs.  Within south Connaught: they were known as ‘The Mac William Eighter’  also in County Mayo ‘The Mac William Oughter’ resided.  Theobald Burke resigned his Mayo territory but later received it back by English tenure, he was then created Viscount Mayo.  The 2nd & 3rd Viscounts suffered losses during Cromwell’s time, but the 4th Earl had his estates returned during 1666.  Peerage ceased with  the demise of the 8th Viscount in 1767.  During 1781 a Mayo man John Bourke was created Viscount Mayo.  He also was appointed Viceroy of India & Andaman Islands.  He was assassinated at the latter island. [iii]

This family of Burke’s or de Burgh’s were descendants of Richard Mor de Burgh the 1st Lord of Connacht.  The Clanricarde title was first recorded in 1335.  Their initial territory stretched from the barony of Clare to Co. Mayo also east to the River Shannon.  This site has a list of the Mac William Uachter or Clanricarde families from 1333 to 1544. [v]

At the head of Lough Lanark, near the town, is an ancient burial-place that commands a fine view of the distant mountains; also, on the other side of the lake are the ruins of a fortified residence. [vi]

Castle Burke was a five-storey tower on the northern shore of Lough Carra originally known as Kinvoynell.  It was renamed after it was granted to Miles Burke 4th Viscount Mayo, whose successor sold it to the Browne’s of Westport.  The south east corner collapsed in recent times. [vii]

This five-storey tower on the northern shore of Lough Carra was originally known as Kinvoynell.  Renamed when granted to Miles Burke, fourth Viscount Mayo, whose successor sold it to the Browne’s of Westport.  The south east corner collapsed in recent times.  An image by Mike Searles is featured on this site. [viii]

[ii] Random Notes on the History of the County Mayo with special reference to the Barony of Kilmaine  Martyn G. V.