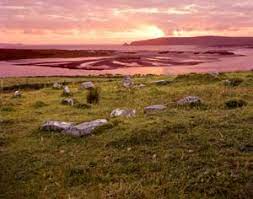 There was a lack of knowledge in earlier centuries that meant that several monuments were just described as ‘Druid’s Circles’  on old maps or surveys.  Several authors believed that tombs or monuments were not established within ancient Ireland.  During 1726 Dr. William Molyneus of Dublin published a book that proposed that Stone Age passage tombs were monuments constructed by the Danes during the eight century CE.  During the 1800’s James Ferguson believed that the Irish megalithic monuments were not of ancient origin but were erected during the First ten centuries of the Christian era.  This  monument was called a ‘ritual ’ court in a 2003 publication.  The mysterious stones of this monument overlook the sea where the Glenamoy River enters the Broadhaven Estuary.  Rosdoagh Court Tomb in Rossport North Mayo was a large monument with a circular kerb of thirty-three stones that once supported a cairn approximately a diameter of eighteen metres.  There are sixteen stones in survival from the large central court that had a diameter of nine metres.  The co ordinates for site are 54 16 47 82 N, 9 48 4.12 W.  An image features on this link. (15th October 2020) [i]

This national monument was known as a ‘Druid’s Circle.’   It was constructed during the Neolithic era to the Bronze Age.  Rosdoagh was later confirmed as a court tomb.  Remains of this large tomb consist of a kerb of an almost circular cairn that once was eighteen metres in diameter.  Of the once central court area just sixteen stones remain. [ii]

Rosdoagh court tomb is situated seven hundred metres southwest of Rossport near Glenamoy River Mouth.  Erected during the Neolithic Age it was originally described as a ‘Druids Circle. ‘  It was a large court cairn with a near circular kerb of thirty-three stones.  Once supported by a cairn of eighteen metres in diameter.  Sixteen stones survive from the large central court with a diameter of nine metres.  A short gallery orientated to south-south east-north-north – west opens to a cairn at south-south-east.  An oval bank surrounds Rosdoagh Court Tomb at twenty-seven by twenty metres. [iii]

Reference to the  Rosdoagh court tomb is on Ordnance Survey maps F827383 / sheet 22.  Most of the site is not visible at present.  The information board at the site is interesting according to this link: https://www.themodernantiquarian.com/site/5470/rosdoagh.html

Rosdoagh court tomb is referenced on this link from 13th October 2002: https://www.megalithic.co.uk/article.php?sid=1234

Originally recorded as a ‘Druid’s Circle,’  it is known now to have been a court tomb.  It was located seven hundred metres south west of Rossport in North Mayo: https://www.routeyou.com/en-ie/location/view/49409946/rosdoagh-stone-circle

The National Monument Rosdoagh court tomb is referenced among lists of Mayo monuments at number 386 at this link: https://www.archaeology.ie/sites/default/files/media/pdf/monuments-in-state-care-mayo.pdf

These publications refer to the Rosdoagh monument:

A high-resolution photograph was produced during 1978 with the use of a 4 x 5 view camera.  On this site it is best viewed full-screen.  One may click on the photo then click at bottom of Zoomify tool bar access the monument view. [vi]

Controversy has arisen between the respect for heritage locations with the modern lure of commerce. Especially in the construction of a modern cottage just outside the monument.  Of greater danger in the area is the Royal Dutch Shell Company to construct their gas pipeline so close to the monument.  Their 29th September 2011 environmental impact statement reported that ‘A Court Tomb…is situated circa one hundred & seventy metres from the pipeline route-t is possible that previously unrecorded prehistoric pre-bog field systems associated with this prehistoric burial monument may be uncovered during earthmoving works associated with the construction of the proposed route…’ [vii]