Dolmen of the Four Moals 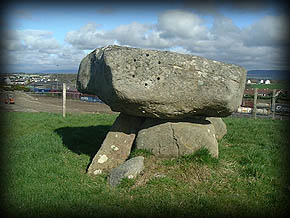 A Megalithic Tomb is located on Primrose Hill above the Railway Station in Ballina Co. Mayo. Its latitude is 546 29. 3 N with its Longitude 99 583 W.  Often called ‘The Dolmen of the Four Moals’ or ‘The Table of the Giants’ or ‘Ballina Dolmen’ also known as ‘The Cloghgle Portal Tomb.’  ‘Moal’ may represent ‘bare’ or ‘bald’ but usually a ‘servant’ or ‘devotee.’  The Tomb has been disturbed over the ages with one piece; perhaps a Door  Stone left 3.5 metres away from the Structure.  The Site is actually a ‘cist’ which may have been a Central Feature of a Bronze Age Burial Site.  Its Roofstone is 1.5 metres in length, it sits on a Support about 3.3 ft off the ground.  John O ‘Donovan the nineteenth century Scholar quoted from a poem ‘Donnaseanchus’ re ‘The Four Moal’s whose names were Maelcroin, Maeldalua, Maelseanaigh also Mael Mac Deoruidh for the foul assassination of Ceallach their foster brother. [i]

The Dolmen on the outskirts of Ballina Town is located about four hundred South – West of the Railway Station: just to the East of an old Lane known as Cockle Street.  The Tomb has been extensively damaged throughout the ages.  There are two Sidestones with a Back Stone that is 0.75 metres to 1.1 metres in height.  They support a large Roofslab which is 0.6 metres in thickness.  A large Loose Stone at the South South – East is four metres away.  There was possibly a Plaque or notice on its Roofstone as it bears an Hexagonal Array.  The legend was incorporated into the Roadside Wall. According to this site: following their execution the bodies of the brothers were carried under a Secret Tunnel that was under the River Moy, then buried at Primrose Hill. [ii]

Located four hundred metres from Ballina train station on Primrose Hill at Knocklehough ‘The Dolmen’ or ‘The Table of the Giants’ is not actually a Megalithic tomb but a ‘Kist.’  ‘Kists’ were large Structures above ground covered by a Cairn.  They were rectangular in plan with vertical sides.  However, in this case one Stone has been removed that lies nearby. [iii]

This Dolmen lies on a small hill that overlooks Ballina Townin North Mayo.  It is located beside a road with the Site signposted as a National Monument.  It is 1.5 metres in height. Three stones in situ support the Capstone.  A fourth Stone that also acted as support to the Capstone lies nearby. [iv]

‘The Dolmen of the Four Moals’ from 2000 B. C. is located at the back of Ballina Railway Station.  Known locally as ‘The Table of the Kings.’  They assassinated  the seventh century Bishop of Connaught Ceallach.  They were executed at Ardnaree ‘The Hill of Executions’ for their misdeed.  Tradition states that their Burial Place is beneath the Dolmen. [v]

Known locally as ‘The Dolmen of the Four Moals’ this Megalithic Tomb is actually not a Dolmen but a ‘kist.’  It is situated on the edge of Ballina Town near a Railway line.  One of the Side – Stones was removed from the ‘kist’ it is left lying close by.  A Folklore Legend recounted the tale of the Battle of Guaine when the Four Moals assassinated Ceallach Bishop of Kilmoremoy, Ballina.  They were brought to trial, hanged at Ardnaree then buried on Primrose Hill.  Photos of the Monument by Jim Dempsey features on this site.[vi]

Duaid Mac Firbis referred to the incidents that surrounded the Four Moals in his fifteenth century ‘Book of Lecan’.  They were possibly Clerical Students called Maelcroin, Maeldalua, Maelseanaigh also Mael Mac Deoruidh. They conspired to kill their foster brother Ceallach Bishop of Kilmoremoy.  The Bishops brother Cu Coingelt with his followers managed to capture the murderers at Doofeeney in Ballycastle.  Following their trial, they were executed: because they were of noble birth the Ancient Law required that they receive a proper burial.  In compliance with the Law the bodies were ferried across the Moy river then interred underneath the Dolmen.  The site features an image of the Monument.[vii]

A video is available to view at this link; http://trip-suggest.com/

This site has an image of the National Monument  the ‘Cist’ of The Four Moals :https://mapcarta.com/35685076