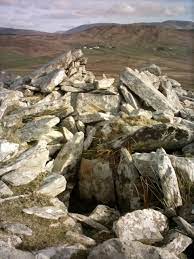 Aillemore Court Tomb is marked on the Historic & Ordnance Survey Mmaps as ‘Cromlech.’  Located on a steep slope that faces east, on the north – eastern fringe of the Mweelrea Mountains also it overlooks the Bunsheenshough River towards the east.  Court Tomb is orientated west-north-west to east-south-east.  The monument consists of a large gallery 3.2 metres in length by two metres in width.  It opens out into a half-court.  (according to this site tomb had been in use as a cow-shed during the latter part of the nineteenth century until recently) The entrance to the first chamber is marked by two erect jamb stones.  Chamber entrance is 1.7 metres in length & 1.5 metres in width.  A low sill stone lies across the entrance.  The second chamber measures 1.5 metres in length, it is 1.9 metres in width at the back.  The chamber also has a sill stone across the entrance.   Broken roof-stones have fallen onto the chamber floors.  The entire structure is surrounded by an elongated cairn that is moderately intact.  Cairn is ten metres in length, seven metres in width at the front & it tapers towards the back of the tomb.  The coordinates are 53 41 57. 07 897 &. 9.52 33, 3 64  W.  An image of the monument features on this page. [i]

This Court Tomb at Aillemore is well-preserved, it is located eight kilometres west – south – west of Louisburgh; near the crest of a ridge that overlooks the valley of Bunsheenshough River.  The monument is visible from three hundred metres west-north-west of a track.  Aillemore Court Tomb consists of a two chambered gallery with a smaller subsidiary chamber located behind the main one.  The cairn rises to the top of the gallery – stones that are about 1.5 metres in height, sixteen metres in length also fourteen metres in width. Court is concealed by cairn material also field-fences.  One feature of this monument is the steeply- pitched, packed corbelling of several large slabs especially on its north side of the gallery.  Stray debris & corbelling has obscured the subsidiary chamber.  (Sheet 37, L762738) One may view a large image of this tomb at this link. [ii]

Near the crest of a ridge that overlooks the valley of the Bunsheenshough river in the Louisburgh area the Aillemore court tomb is located.  It is visible from a track that is three hundred metres west-north-west.   Monument consist of a two-chambered gallery with subsidiary chamber that is located behind the main one.  Cairn rises to the top of the gallery that is approximately 1.5 metres in height sixteen metres in length also fourteen metres in width.  Cairn material &  field-fences conceal the court.  The steeply-pitched, packed corbelling of several large slabs especially on the north side of the tomb are an outstanding feature of Aillemore.  Corbelling & stray debris has obscured the small subsidiary chamber.  Photos on this site include those from: Aiden Clarke 2006, Anthony Weir 2009, Oliver Dixon 2009 also Keith Salversen 2011 with an area map.  Coordinates of tomb are latitude 53.69 94 40 N, longitude 9. 87 61 13 W.  (Anthony Weir 13th October 2002) [iii]

Lying eight kilometres west-south-west of Louisburgh also four kilometres west-south-west of the Srahwee Court Tomb the Aillemore court tomb overlooks the valley of the Bunsheenshough river near to the crest of a ridge in the Townland of Aillemore.  The enormous tomb’s roof slabs were pulled towards one side: these had once been supported by massive steeply pitched, tightly packed stones.  Displaced cairn material has concealed the forecourt at the entrance.  Court tomb itself is made up of a two-chambered gallery with a smaller subsidiary chamber behind it.  The surrounding cairn rises 1.5 metres to the top of the gallery stones.  The cairn is over sixteen metres in length also fourteen metres in width. (Conor Wilson 22nd August 2019) [iv]

One type of megalithic tomb was the court cairn.  They were erected by use of large stones with corbelled roofing.  They were characterized by a court area at the entrance.  They contained one or more burial chambers within.  This well preserved ‘Leaba Dhiarmiad ’ at Aillemore is one such monument.  It was associated with the legend of Diarmaid & Grainne. [v]

Corlett Christiaan during 1999 published an article in the The Journal of Irish Archaeology  vol 9 1998 (Pages 9-26 ) (Word Well Ltd)  It referenced that court tombs were in general confined to the northern half of the country including Aillemore. (pages 80 / 81)   A preview of the publication that may be downloaded at this link. [viii]

One may view a J. B. Yeats painting of unidentified standing stones at this link. [ix]

Mary O ‘Malley penned an article on iCan Louisburg & Killen Heritage website that stated that a Court Cairn Tomb on Aillemore Hill was known as ‘Leaba Diarmaid agus Grainne.’   It may be viewed at this link: http://www.louisburgh-killeenheritage.org/page_id__50_path__0p2p.aspx

This site references Aillemore court tomb among places in the Louisburgh area: https://www.louisburgh.ie/where_to_go_in_the_louisbugh_area_co_mayo_ireland-silver-strand.html