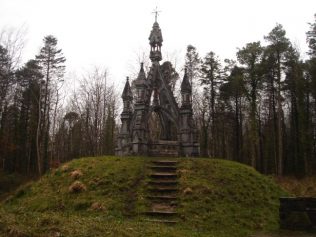 This eye-catching Knox-Gore Monument situated within Beleek Woods is a popular visitor site.  It was constructed as a memorial to Sir Francis Author Knox-Gore (1803-1873) of Beleek Manor.  The large waterless mound was constructed to accommodate the burial of a favourite Horse. [i]

Following the demise of his father James Knox on 21st October 1818 his eldest son Francis Author Gore of Beleek Manor succeeded him.  He was created a Baronet on 5th December 1868.  He constructed Beleek Castle in the demesne.  Following his demise on 21st May 1873 Baronet Francis Arthur Knox-Gore: he was buried in view of the castle within the demesne grounds.  His son Sir Charles James the 2nd Baronet had a monument of cut stone surrounded by a moat constructed over the Internment site.  Years later Sir Charles was interred with his dog Phizzie along the banks of the river Moy within the demesne.[ii]

Beleek Castle was established between 1825 to 1831 at a cost of ten thousand pounds it was designed by architect John Benjamin Keanes in a neo Gothic style.  Sir Francis Knox-Gore 1st Baronet inhabited Beleek Castle with his wife Sarah also their nine children.  He was buried in Beleek Demesne according to his wishes.  James Franklin Fuller designed a neo-Gothic monument in Beleek woods that marks his Internment site.  His wife with his favourite horse were buried beside him.  His son Charles, the 2nd Baronet is buried within the demesne with his dog Phizzie near the banks of the Moy. [iii]

This monument situated within Beleek Woods in Ballina, Mayo was constructed by Charles James, son of Sir Arthur Francis Knox-Gore of Beleek Manor.  It was designed by James Franklin Fuller in an Hiberno-Romanesque style.  He had requested that he be interred in his estate grounds with his horse.  Several images feature on this page. (3rd November 2017) [iv]

Sir Arthur Francis Knox -Gore arranged for the construction of Belleek Manor.  He is buried alongside his beloved horse in a mausoleum in the woods. [v]

A large Neo-Gothic monument marked the internment site of Sir Francis Knox-Gore during 1873 in Beleek Woods in Ballina: https://irelandonabudget.com/ballina-in-county-mayo/

Image of monument with a review is referenced at this link: https://www.inspirock.com/ireland/ballina/gore-knox-monument-a4160116839

A review on this TripAdvisor site states that a monument was constructed over the resting place of Sir Francis following his demise during 1883.  A deep moat surrounds it.  It was constructed by Sir Francis’s son Charles: https://www.tripadvisor.co.za/ShowUserReviews-g211864-d4213565-r575490924-Gore_Knox_Monument-Ballina_County_Mayo_Western_Ireland.html

Knox-Gore family history & monument may be accessed at this link: http://lordbelmontinnorthernireland.blogspot.com/2016/03/belleek-manor.html

Several images & history with images of Charles with his dog near the shores of the river Moy may be viewed at this site: http://davidhicksbook.blogspot.com/2019/02/

A map of the monument site in Beleek Woods features at this link: https://mapcarta.com/N4615930578

David Hicks on Twitter during 10th of November 2019 believed that the James Franklin Fuller’s sculpture in Beleek Woods in Ballina was modelled on the 1840’s Castle Lacken Gazebo at thissite: https://twitter.com/davidhicksbook/status/1193534743117205504?lang=en