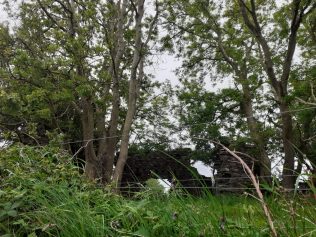 A farmhouse annotated as  Ashbrook [of] Moore Esquire  by Taylor & Skinner (1778 pl. 223) was once regarded as an interesting component of the eighteenth century domestic architectural heritage of County Mayo.  The building had historic connections with the Moore family of Straide that included John Moore (1763-99) President of the government of the province of Connaught who received the title during 1798.  The detached three-or five-bay two-storey farmhouse was constructed on a T-shaped plan with an outline of single-bay (single-bay deep) full-height east central return, (surveyed 1838 then published in 1839 ) An opposing monolithic dovecote annotated as ‘pigeon house’  in the first edition of the ordnance survey (surveyed 1838 & published during 1839 ) was extant during 1777.  Ashbrook house was set in landscaped grounds with cement rendered piers to perimeter that supported a tubular steel ‘farm gate.’   An adjoining walled garden was extant during 1838. Fragments of a chapel house the remains of George Moore (1729-99) of Moore Hall (ITA 1944, published 1839)  House was vacant during 1795: occupied again in 1814.  Derelict by 1838 in ruins by 1895.  Two images feature on this site.  Registered number was 31307101. Coordinates were 127314, 296353.  (Date Recorded 20th December 2010) [i]

Several Moore family members are buried within Ashbrook House at  Straide in County Mayo, (their ancestral home) The prosperous merchant George Moore had a son John who sided with the French military invaders that landed at Killala.  Following the Battle of Castlebar on 31st August 1798 General Humbert issued a decree to appoint John Moore as the President of the government of the province of Connacht.  (Further details may be viewed at this site)  [ii]

An early eighteenth-century house named Ashbrook in Straide in the civil parish of Templemore in Co. Mayo was the seat of Mr. Moore during 1786. (noted by Wilson)  It was described as a derelict site at the time of the first ordnance survey.  Michael Costello occupied the house during 1814.  An Irish Tourist Association file referred to the residence as a two-story plain featured house with a small chapel ruins nearby that possibly deteriorated during the early nineteenth century. Several ruins are visible at the site.  OSI Ref: M274 964. Discovery map 31.  OS Sheet 71.  Coordinates were latitude 53. 91 85, longitude 09. 10 49 1. [iii]

Boyle Mary in Summer Sunshine in Moore Hall  stated that ‘The Moores were originally an English Protestant family and some became Catholic because John married a Catholic, named Jane Lynch, Athy, Co Galway.  They had five children and lived at Ashbrooke, Straide, Foxford, Co Mayo’.   Several images feature at this link including the restored walled garden with dovecot.  (23rd April 2021): https://www.ouririshheritage.org/content/archive/place/miscellaneous-place/summer-sunshine-in-moore-hall

George Moore (1727-1799 ) who founded the famous Moore Hall Estate at Lough Carra was originally from Ashbrook House near Strade in County Mayo. [v]

John Healy penned an article titled Moorehall’s fortunes come full circle  in The Mayo News of 16th January 2018.  He stated that George Moore of Straide on his return from Alicante in Spain journeyed via Ballinrobe to his home in Ashbrook. [vi]

This PDF states that John Moore was the son of a prosperous merchant George Moore of Ashbrook House in Straide: http://www.straideparish.com/sample/wp-content/uploads/POPfinal.pdf

Ashbrook Estate is steeped with historical information with the earliest development dated to the late seventeenth century when constructed by Captain George Moore who was granted lands following his involvement at the 1690 Battle of the Boyne.  His grandson George with wife Catherine were in possession during 1729.  Following his demise, he was buried in the old Catholic church on the grounds:  https://www.farmersjournal.ie/saving-a-part-of-mayo-s-heritage-587169

Ashbrook House lies in ruins but a two-story section survived (it was in use as a hay-barn for several years)  Ninety percent of the natural roof slates were salvaged then re-applied during reconstruction.  The roof structure was reinforced by doubled up rafters with collar ties, the chimneystacks were stabilized, the cracks in both gable walls were repaired with pinned, stitched & pointed with lime mortar.  The loft floor was strengthened with the insertion of two new timber beams, the loft doors were replaced with new traditional timber plank doors painted with a linseed oil-based paint.  The arch over the front of the ground floor door opening was repaired.  The ground floor window was replaced with a timber Louvred window.  An external stone staircase was reconstructed.  Article from ‘Saving a part of Mayo’s heritage’: The 2020 GLAS Traditional Farm Buildings grant scheme is responsible for saving the last standing building from an estate dating back to the 18th century.  (Darren Carty 9th December 2020 The Farmer’s Journal)  Several images feature at this link: https://www.farmersjournal.ie/saving-a-part-of-mayo-s-heritage-587169

This information from The Waterford News & Star entitled Nation Honours Patriot  included a report of the re-internment at the Castlebar ’98 monument of the remains of John Moore President of the republic of Connaught & hero of 1798.  He was son of George Moore of Ashbrook House & Senorita Kathryn de Kilkelly of Galway. (15thAugust 1961)  [vii]

This article (part 5) of The Mystery of Saint Ciaran’s Holy Well  stated that on the death of his eldest brother during 1784 heir George Moore returned to his ancestral Ashbrook House with his wife Katherine de Kilkelly.  He purchased eight townlands from Viscount Dillon: included were a church, mass rock also St. Ciaran’s well.  At Ashbrook House, a small chapel was constructed where daily mass was celebrated by a Dominican monk from Straide abbey. Later in life while living at Moore Hall George suffered a stroke & was blinded.  In his will he requested that he be buried in his old home at Straide.  During November 1799 he was interred within the chapel.  (Mary O ‘Brian 12th October 1983)  [viii]

The origins of the Moore family date to the fifteenth century when the thrice-married Judge Thomas Moore was Lord Chancellor of England in the reign of King Henry V111.  He was later imprisoned then executed for his objections to the King’s divorce from Catherine of Aragon. His wife with five children moved to Yorkshire.  His sons transferred to the protestant religion whilst a grandson with his English-born wife moved to Ballina in County Mayo during the late seventeenth century.  Captain George (the youngest captain in King William’s Army) moved to Mayo during 1693.  He was awarded the highest accolade to a soldier with the title of the Ulster King of Arms & Vice-President of Connaught following the 1690 Battle of the Boyne.  During the Cromwellian plantation the Ashbrook lands were gifted to William Moore.  Forty years later Captain George moved to the residence.  Following his demise: he was interred within the vault of the protestant section of Templemore graveyard with the title of the ‘Ulster King of Arms’  engraved on the tomb.  He was the first family member to have been buried at Straide.  (Mary O ‘Brian Straide Historian 4th September 1991) [ix]

The Moore Family were formerly residents at Ashbrook in Templemore parish in the barony of Gallen: http://landedestates.nuigalway.ie/LandedEstates/jsp/family-show.jsp?id=119

The Moore family originally were from Ashbrook House near Straide according to Marteen Lane 7th September 2020 in an article titled Ireland-A Short History of Moore Hall: https://marteenlane.com/2020/09/07/a-short-history-of-moore-hall/

This site states that The Moore family originally came from Ashbrook near Straide in Co. Mayo: http://timetravelireland.blogspot.com/2013/02/moore-hall-county-mayo.html

This PDF references the Moore’s of Ashbrook House: it may be downloaded on this link: https://www.academia.edu/35632109/Progression_of_the_Landed_Gentry_of_Mayo_BROWNES_MOORES_BLAKES_and_LYNCHES_Draft_Paper_?auto=download

George Moore who founded the famous Moore Hall Estate at Lough Carra came from Ashbrook House near Strade is referenced at this link: https://www.routeyou.com/en-ie/location/view/49407286/strade

According to this link George Moore is buried in Ashbrook near Straide in County Mayo: http://www.abandonedireland.com/Moorehall.html

This PDF with Moore family history references John Moore was born in 1706, that George (born in 1729  & died in 1799) was also merchant of Ashbrook, Moore Hall & Alicante in Spain.  He married Katherine de Kilikelly. [x]

Ashbrook House is an historical building of the Moore family as referenced in O ‘Hara Bernard ‘S 2010  Davitt: Irish Patriot and Father of the Land League  (Chapter two) Gate Press at this link: https://books.google.ie/books?id