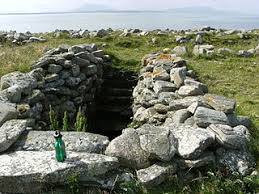 During Griffiths Valuation 1855 Inishglora Island was part of Lord Bingham’s estate or ‘Stripe Brendan.’   At the visit of Dr. Brown during the 1900’s it was disused.  St. Brendan’s Church is now a roofless building that was an example of a Gallarus with the west gable still intact. Within the north east corner of the church was a wooden statue of St. Brendan at four by three in height.   It disintegrated over the years to a shapeless lump according to Dr. Charles Brown in 1895 at Trinity College, Dublin.  O ‘Donovan compared the statue to one of St. Molaise at Inishmurray.  On the island are two fragments of other churches; Tempall na Bhfear which was constructed centuries later also it was larger than St. Brendan’s Church & Teampall na mBan that according to tradition was a nunnery.  Traces of a dry-stone wall surrounded the churches.  A group of three Torthithe or Trátháin of the beehive cyclopean style were in situ, the largest called St. Brendan’s Cell.  O ‘Donovan believed those dwellings were pagan in origin perhaps of ‘Fir Domhnainn.’   Later they were in use as penitential cells. Steps lead down to St. Brendan’s Well.  On the island may be seen several early cross slabs, pillars, seven stations: four of which are on western side of Inishglora.   This island was associated the legend of the Children of Lir.  O’ Flaherty referenced Inishglora in his Ogyio.  It is referenced as one of the wonders of Ireland’ withinThe Book of Ballymote.   During 1146 Gerald of Wales referenced the Inishglora Island.  Interesting images on this site are the beautiful stained-glass windows by Evie Hone.  One window is situated in the porch of Coill Miolcon church in Maam Valley in Connemara; it was dedicated by a member of the O ‘Malley family in remembrance & thanksgiving for St. Brendan’s cure of the last O ‘Malley heir on Inishglora.  (Extract from Within the Mullet 1998 Nolan Rita) [i]

The little island of Inishglora is half a mile in length.  It is located less than one mile from Erris or five miles west of Belmullet in north Mayo.  Inishglora Island was believed to have been a place where bodies did not decompose in several old manuscripts or publications also by Geraldus, Nennius & by The Norse Kongs Skuggio.  This was later disputed by Roderick O ‘Flaherty. (Extract from The Wonders of Ireland 1911 Joyce Patrick Weston) [ii]

Inishglora Island was one of the holiest of Mayo’s islands dedicated to St. Brendan the navigator who founded a settlement there.  It has been unoccupied since the early twentieth century.  Several archaeological remains were discovered on Inishglora.  Among them are a roofless church that was an example of a Gallarus type of a primitive Christian architectural building.  A sixteenth century wooden statue was displayed in the north east corner of the church.  Also remains of two other churches are visible; Teampall na bhfear & Teampall na mBan: the latter may have been a nunnery.  Monks possibly used the three beehive huts for penitential purposes with the largest hut known as St. Brendan’s Cell.  A holy well was also dedicated to him.  Several early cross slabs or pillars may be viewed on this island.  There are seven stations of the cross, four of which are located on the western area of the island.  The last station has a rock with two piles of stones known as ‘Cloch na h-Alhchuinge.’  [iii]

Several monastic ruins from Inishglora Island are visible from the sea.  The name itself translates as ‘Isle of Purity’  from the tradition that human remains did not decompose on the island!  Fifth century triple beehive cells were situated on the island also two large circular foundations buried under thick turf.  The stonework of the largest St. Brendan’s Cell was twenty feet in diameter also six feet in height on its westside.  During 1895 it was reported as being twelve feet with a three – foot hole in its apex.  Monks resided at the huts from the early 1600’s.  The St. Brenan Chapel or St. Brendan Oratory was similar in style to the Gallarus oratory.  This site features a sketch of the statue to St. Brendan that stood for centuries at the west gable from 1841.  It was described as a shapeless lump due to erosion during 1895 but it had disappeared by 1932.  A few pieces of the corbelled roof survive.  Several fallen roof stones were assembled into stone beds on the floor of the oratory & in the burial ground.  Adjacent to the oratory are the ruins of a men’s chapel.  The women’s church near the shore has been destroyed.  Several images or sketches of ruins & map of this Island feature on this site. (Marc Calhoun ) [v]

Legend of the Children of Lir from the Tuatha De Danann Tribe’s meeting with St. Brendan on Inishglora Island with his blessing of them at pre – burial with Fionnuala in the middle, Aodh in front of her, Fiachra & Conn on either side is penned by Fiona Hurley at this link. (6th September 2016) [vii]

From the cylinder project a song ‘The Islands of Inis na Glóire’  was recorded by Brid Bairéad, (Bean Ui Ghacháin), Binghamstown, Co. Mayo on 4th October 1954 as part of Micheál Mac Énrí Irish Folk Commission.  One may hear recordings at this link: http://www.bealbeo.ie/ediphone/640_inish_glora.html

The Mayo News 25th May 2021 featured an article titled the Lure of Inishglora  in Fr. Kevin’s column Second Reading (page 27 )