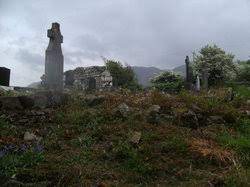 This settlement was located below Croagh Patrick on the Murrisk &  Louisburgh left hand side of road.  At the entrance is a small metal gate with a white cross.  Glaspatrick or Glaise Phádraig received its name from the nearby stream that runs from the summit of Croagh Patrick to Clew Bay.  The remains of a small church from possibly the twelfth century with burial grounds are situated within an early ecclesiastical enclosure.  Parts of the north also south walls remain in situ.  Once a holy well was located against the outer stone wall of the enclosure.  According to tradition St. Patrick’s charioteer Totmaol’s demise occurred within this area also he was buried here.  Map 30 is L 9081 8245.  Coordinates are longitude: 9 39 24 W, latitude: 53 46 48 N.  Three excellent images by Jim Dempsey feature on this site.  (May 2017)  [i]

Ecclesiastical sites such as the one at Glaspatrick were looked upon as particularly significant given their association with the new religion of Saint Patrick during that era. According to several sources the charioteer of the saint was buried at this site at Muiresc Aigli (the plain between the sea or Mons Aigli the old name for Croagh Patrick)  For classification purposes it was necessary for several features to exist at sites i.e. name of an Irish saint, enclosure, church, burial ground, holy well, penitential stations, leacht or (reputed ) Burial place of the founder, early Christian cross slabs, bullaun stones, souterrain or an upright pillar stone.  Glaspatrick included church ruins, burial ground also a holy well.  According to local knowledge a tall, engraved pillar stone  once stood at the site.  Map (1:50000 ) is Ordnance Survey Ireland, discovery series no 31.  National grid reference is 090830 East, 282430 North. This link features two images of the graveyard. [ii]

Gloshpatrick Church was a medieval church constructed during the early twelfth century.  It was named after the stream nearby-Gláise Phaidraig (Patrick’s Stream)  in honour of St. Patrick  patron saint of Ireland.  The ruins of one gable of the church are visible within the graveyard.  This small cemetery is situated in the shadow of Croagh Patrick: it has several headstones.  An image by Dympna Joyce is featured on this site. (17th May 2011) [iii]

Glaspatrick Church stands in an area around Croagh Patrick mountain.  It was one of the original churches founded by St. Patrick along with Aughagower also Teampall Padraig on the summit of the holy mountain.  According to legend there is another connection to St. Patrick at Murrisk as Totmael St. Patrick’s charioteer was believed to have died in this area then interred within Glaspatrick cemetery. [v]

Gloshpatrick is referenced on the Ordinance Survey Map as Glaspatrick.  Glais Phádraig may be translated as ‘Patrick’s streambed.’  The total area is eight hundred & twenty-three acres. [vi]

This site from The National Library discusses John Healy’s 1908  Irish Essays: Literary and Historical : it may be of interest: https://www.libraryireland.com/HealyEssays/Patrick1.php

At Glaspatrick are the remains of a small medieval church within a graveyard dated to the early eleventh century: http://www.murrisk.ie/M-LocalServicesFacilities.html

Ecclesiastical remains of church & graveyard are referenced on this PDF: https://www.archaeology.ie/sites/default/files/media/pdf/Archaeology-RMP-Mayo-manual-(1996)-0035.pdf

Publications that refer to above article include:

Walsh G. Preliminary Report on the Archaeological excavations on the summit of Croagh Patrick 1994  in the Cathair na Mart: Journal of the Westport Historical Society (pages 1-10)