You are here: HomenextExplore our archivenextPlacesnextA miscellany of placesnextBalrothery Weir, on the Dodder, part of Tallaght Waterways History.

Balrothery Weir, on the Dodder, part of Tallaght Waterways History. 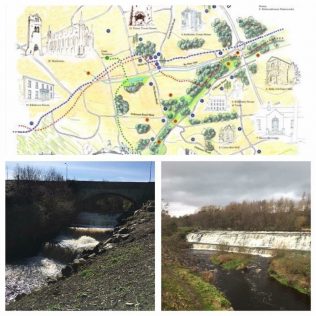 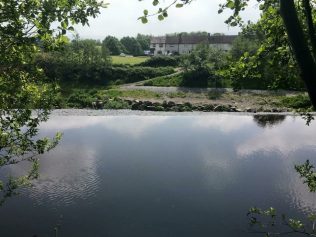 zoom
From the top of the weir, north bank
Tallaght Community Council 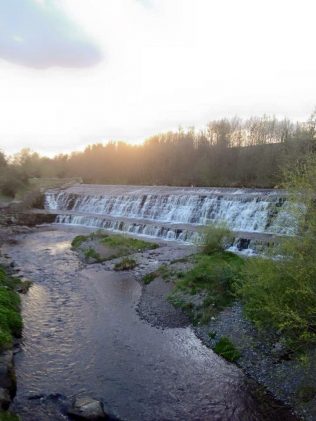 zoom
From the pedestrian bridge onto the falls
Tallaght Community Council 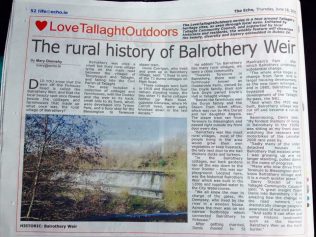 Balrothery Weir is a Historical Engineering Work ( HEW) and a protected structure. It has a few names that reflect the development around the structure since it was built in 1244 – Balrothery Weir, Firhouse Weir, City Weir and includes the City Watercourse, is a well known local landmark and is a hidden gem along the Dodder Valley Park, just off the M50 at exit 11 ( public parking at Old Bawn and Kilininny / Firhouse).

The weir was once of great importance to every citizen of Dublin. Prior to 1244, the water supply for Dublin City was provided by the Poddle, which rises in the Greenhills area of Tallaght, but this water supply was inadequate for a growing city in the early thirteenth century.

It was decided to convey water from the Dodder to supplement the supply from the Poddle, and it was at Balrothery that the Dodder was diverted.

The weir was built by the monks of St. Thomas’ Abbey on Thomas Street at a date before 1244, and then altered by the citizens in 1244 to increase the flow. Almost all of the Dodder’s water was diverted into the weir, through an open aqueduct which then directed the water beneath the main Tallaght road and headed for Templeogue House, beyond which it joined the Tymon River coming from Tallaght North. This confluence became the Poddle River proper. The Dodder-Poddle water system was completed about the middle of the 13th century and remained in operation for 500 years.

A 1719 Act of Parliament refers to the watercourse as “the chief supply of water not only for the inhabitants of the said city; but also for this majesties Castle of Dublin, and without which it would suffer exceeding great prejudice.” The act sought to make provision for the cleaning and repairing of the watercourse due to the growing industrial and milling activities along the Dodder.

The importance of the river as a source of water to the citizens of Dublin can be gauged from an incident in 1738. Sir Compton Domville, then resident at Templeogue House, was able to have his nephew Lord Santry, a member of the Hellfire Club, saved from execution for the murder of one of his servants by threatening to block off the watercourse which flowed through his lands. The threat was successful as the citizens had no other supply.

From 1845, when the Dodder was straightened and deepened, the only way for pedestrians to cross was the dangerous one of wading along the top of the weir. A lattice bridge was erected about 1860. This bridge was replaced by the present bridge opened by South Dublin County Council in 1995.
Pedestrian access to nearby Tymon Park is also possible from the weir, via the M50 underpass.

The views and sounds are spectacular and belie it’s urban location.