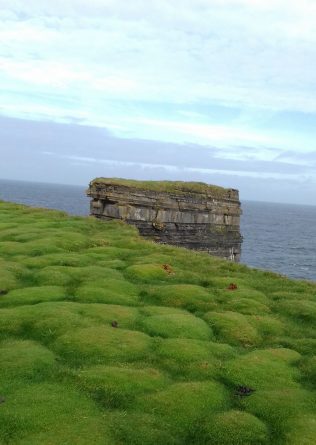 Dún Briste or ‘Broken Fort ‘ was once joined to the mainland on north Mayo’s coastline.  The ‘Sea Stack ‘ stands forty-five metres in height.  Formed approximately three hundred million years ago during the Lower Carboniferous period when sea levels were much higher also the coastline was further back from the shore.  It has been accepted that an arch led to the rock’s collapse during 1393 following very rough sea conditions.  Several loose stones located on the stack (shown on this site) at its top left of a 1968 photograph are still in situ.  This photograph taken by Maria McCormick is featured in Donal McCormick’s 2016 edition of The Road to Downpatrick.  A large piece of rock approximately four metres at the top right of the image had fallen into the sea.  The actual splash during that event was filmed by Olivier Lerebourg.  Several images feature at this link. [i]

The ‘Sea Stack‘ at Dún Briste is a layered chunky tower of rock that rose off the western coast of Ireland.  ‘It is old, but it almost certainly doesn’t represent millions of years of geological processes, it was likely formed tens to hundreds of years ago’ according to University College Cork paleobiologist Maria Mc Namara.  The layered sedimentary rock was formed during the Carboniferous era: a sixty-million-year long period that lasted from three hundred & fifty-nine million to two hundred & ninety-nine million years ago.   Evidence of overlapping of strata or layers indicate a sea level rise occurred.  ‘As the land surface was flooded: sediments were laid down progressively inland.’  (Mc Namara)  During a storm in 1393 an arch that lead to the forty – five metres ‘Sea Stack ‘ collapsed into the ocean.  This may explain why it received the title of ‘Broken Fort. ‘   A team of scientists helicoptered to the top of Dún Briste during 1990 where they discovered remains of a medieval house also a broken quern stone.  Daredevil Ian Miller climbed the ‘Sea Stack‘  during 2016.[ii]

Several metres off the north Mayo coast at Downpatrick Head sits the forty-five-metre-high flat-topped ‘Sea Stack ‘ named Dún Briste or ‘The Broken Fort.’  This is relatively new as it was only separated from mainland Ireland during 1393 when monster seas severed it from County Mayo due to an overnight storm.  It’s summit is approximately fifty metres in length also fifteen metres in width.  The flat-topped ‘Sea Stack ‘ contains remains of buildings.  During 1980 three scientists: Dr. Seamus Caulfield, his father Patrick Caulfield & Martin Downes professor of biology Maynooth College landed on the summit by helicopter.  They discovered remains of a building running across the centre of the headland also several plant species.  The remains of a second building along the western edge appeared to be in danger of falling into the sea.  They believe people with their livestock had once Inhabited the area.  Two other unusual discoveries were an ancient separation gate that allowed sheep to pass from one field to another while yet another gate restricted access to the area.  A still functioning quern stone was also discovered.  The scientists reported that due to the size, shape of buildings & the gate that leasing had been established in the Medieval period.  The first ascent by three rock climbers during May 1990 was attempted by use of a groove system up the north facing seaward face. [iii]