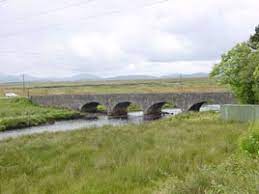 This bridge at Ballacorrick in Mayo spanned the Owenmore river.  It was constructed ‘by order of the Grand Jury [and the] Right Honourable Denis Browne [1763-1828] Foreman.’   The bridge was erected to a design by William Bald (c.1789-1857) cartographer & engineer.  It was an important component of the early nineteenth-century civil engineering heritage of Mayo confirmed by the elegant ‘sweep’ of the arches also by the ‘sparrow pecked’ sheer limestone dressings.   According to this site the bridge was designed 1817.(? )  It was constructed from 1820 / 1 with a series of four elliptical arches that crossed the river.  The arches were between cast-iron pattress’ tie plates with drag edged tooled limestone ashlar voussoirs.  Bridge had tuck pointed coursed cut – limestone walls centred on tooled limestone ashlar rounded triangular cutwaters to piers that had domed pyramidal capping.  Also cut-limestone ‘bas-relief’ stringcourses supported parapets that had tooled cut-limestone coping centred on rope twist-detailed drag edged cut-limestone date stone ‘1820’. Still in situ during 1838 this bridge is titled ‘The Musical Bridge.’   A weathered benchmark remains of additional interest for the connections with cartography& preparation of maps by the ordnance survey (established 1824)  Several images feature on this site.  Registered number is 31302702.  Coordinates are 96959, 319965.  (date recorded 20th November 2011) [i]

An episode of the Evening Extra  detailed the musical bridge or Ballacorrick bridge in a RTE broadcast on 20th November 1987 with reporter Siobhán Cleary.  Construction of this bridge began circa 1820 by civil engineer William Bald.  Throughout the Famine years the construction continued with the loss of several builders.  According to the report as the last stone of the bridge was required the three remaining workers no longer had the strength required to lift it.  The bridge remained unfinished.  The southern side of the bridge only makes the music when one drags a stone alone its top.  For that programme Siobhán Cleary travelled to Mayo to play music also to search for ‘Middle C.’   A plaque that recorded the following is on site: ‘By order of the Grand Jury Right Hon Denis Brown Foreman this bridge was designed and built by William Bald Civil Engineer 1820.’  [ii]

The Bellacorrick Bridge was constructed circa 1820 over the Owenmore river.  It was designed by civil engineer William Bald.  His assistant was Castlebar native engineer Patrick Knight of the Board of Works.  In early nineteenth century records it was described as the largest also the best-built bridge within Mayo.  It was necessary to secure the foundations by timber because of the soundness of the ground.  Bridge has four elliptical arches each nine metres apart.  The battlements are nearly one hundred & twenty metres in length.  It also known as ‘the musical bridge.’   Music may be produced in two separate ways:  Firstly, if one rolls a stone along the parapet, the musical notes are produced in rapid succession as the stone drops.  Secondly, one may hold the stone in one’s hand then strike it on the slabs that had formed the coping of the parapet, (as one travels along) also when a stone strikes the bridge one must draw back the hand immediately.  During the seventeenth century the Erris prophet Rua U ‘Cearbhain made a prophecy that the Bellacorrick Bridge would never be finished, it has remained so to this day.  [iii]