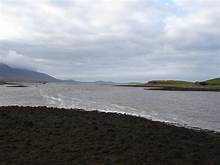 Drumlins either Oval or Elongated Hills are believed to have been formed by the streamlined movement of Glacial Ice sheets across rock debris or otherwise known as Till.  The name itself was derived from the Gaelic ‘druim’ a rounded hill or mound.  It first appeared during 1833. [i]

The impact over several million years produced a series of Glaciations that extended across much of Western Europe.  Within Ireland the most recent of these Glaciations saw ice perhaps on occasion more than a thousand metres thick over the Land.  As a result of the erosive work of slow – moving ice with  depositional activity under the ice or at its margins it produced a huge impact throughout.  Smaller Drumlins are in West Mayo where actually some are submerged in the Clew Bay Area.  Drumlins are usually three hundred metres long or perhaps possibly over one hundred metres wide. [ii]

In spite of its current Moderate Climate Ireland displays impressive features of past Glaciation from periods of Geologic History known as Ice Ages.  One example is the Drumlin Field of Clew Bay with Newport Bay on the Mayo Island’s North Atlantic Coast.  The name Drumlin is derived from the Irish word droiroimnín (littlest ridge.)  Drumlins may be explained as features created while the Glacial Front melted back.  The Glacier the pushed up over the debris that the ice had moved forward.  An inverted spoon shape is the Classic Form, or a narrow Ridge elongated in the direction of the ice flow. Several were steepest on the upstream side then trailed off towards the newly exposed ice – free area.  The Drumlins showed wave erosion that created Till Banks at the sea’s edge as the resultant sea level rose with the force of the melting Glaciers.  The Clew Bay Ireland Coordinates are: 53.833333, – 9.8. [iii]

Clew Bay has according to tradition three hundred & sixty – five islands: one for every day of the year! The largest one Clare Island guards the entrance to the sheltered bay.  The Islands in Clew Bay are partly drowned Drumlins, which are elongated, steep – sided hills that were sometimes described as whale – backed.  They were formed when Glaciers reshaped the Landscape in the last Ice Age.  Several of the hills on land around the Bay are similar Drumlins.  Collanmore Island near Westport is the largest Island within the inner bay.  This site includes a video of Clew Bay, its Islands, its people & the site’s formation from a BBC Coast Team. [iv]

The Clew Bay Drumlin Field proved how powerful ice was in the shaping of the Landscape.  Drumlins of Ice Debris left by Ice – Sheets formed when the Sea rose then drowned the Low Land. [v]

Michael Cusack in his research for his book ‘The Story of Clew Bay, from Granuaile to John Lennon’ stated in an article in ‘The Irish Times’ 14th June 2016 that some twelve thousand years prior to Granuaile Clew Bay was covered in ice.  As the temperature rose the ice retreated with wave – like patterns that left sediment on the land’s surface.  This occurrence resulted in the Formation of Drumlins from West to East with their massive clay boulder cliffs.  He also discovered that Clew Bay was often referred to as a stunning example of a Drumlin Swarm…there are one hundred & forty – one named Drumlins also countless unnamed Tidal – Islands.  Cusack includeed that the great nineteenth century Author William Thackeray referenced Clew Bay a:, “…the bay and the Reek, which sweeps down to the sea, and the hundred isles in it, were dressed up in gold and purple and crimson, with the whole cloudy west in a flame. Wonderful, wonderful!”  [vi]

Drumlin from the Irish word ‘Droimnin’ or ‘little ridge’ was first recorded during 1833.  According to the classical sense it was an elongated hill in the shape of an inverted spoor or a half –  buried egg that was discovered in Glacial Ice that had acted on unconsolidated Till or ground Moraine.  Drumlins may have comprised of  layers of clay, silt, sand, gravel or boulders in various proportions.  Glacial Landforms were composed primarily of Glacial Till.  They formed near the margins of Glacial Systems or within areas of fast flow deep under Ice – Sheets.  These Drumlins were typically 1 – 2 kms, less than fifty metres in height also below three hundred to six hundred metres in width, they may have had possibly a length or width ratio of between 1:2 & 1:3.5 kms.  There are two main Theories of Drumlin formation: Constructional, in which the form of Sediment is shaped ie. by Subglacial Deformation or Remnant / Erosional.  The Latter proposes that Drumlins were formed by erosion of material from an unconsolidated bed.  A hypothesis that catastrophic sub-glacial floods formed drumlins by deposition or erosion challenges conventional explanations for drumlins.  It included deposition of Glaciofluvial Sediment in Cavities scoured into a Glacier Bed by Subglacial Meltwater also Remnant Ridges left behind by Erosion of Soft Sediment or Hard Rock by Turbulent Meltwater.  This hypothesis required that huge subglacial meltwater floods produced raised sea level by tens of centimetres in a few weeks. [vii]

Dominant Mountains surround Clew Bay in County Mayo on both sides where Small Islands called Drumlins are located.  10,000 years ago these were created as Glaciers when Ice melted then retreated with the resultant small Sand or Shale Islands Formation.  Reported three hundred & sixty – five islands contain some partially Submerged Sandbanks only. [viii]

In spite of its currently Moderate Climate Ireland displays Impressive Features of Past Glaciation from Periods of Geologic History known as Ice Ages. One example is the Drumlin Field of Clew Bay / Newport Bay at Ireland’s North Atlantic Coast.  The name Drumlin is derived from the Irish word ‘Droiroimnín’ (littlest ridge.)  Drumlins are often explained as Features created while the Glacial Front melted back.  The Glacier pushed up then over debris that the Ice is moved forward. An inverted spoon shape is the Classic Form as a narrow elongated Ridge in the direction of Ice Flow. Several are steepest on the upstream side then trail off toward the newly exposed Ice – Free Area.  The Drumlins display Wave Erosion that created Till Banks at the Sea’s edge.  This was a result of Sea Levels as they rose with the Glaciers melt.  Clew Bay Ireland Coordinates: 53.833333 -9.8 (Author / Photographer Thomas McGuire 3rd July 2015 photo taken on 12th May 2015) [ix]

The islands of Clew Bay are listed at this link: https://en.wikipedia.org/wiki/Clew_Bay

This link features an image of Drumlins from Croagh Patrick:https://www.geolsoc.org.uk/GeositesClewBay

This site may be of interest: https://www.askaboutireland.ie/narrative-notes/the-ice-age-in-ireland/index.xml

[ii] The Work of Ice (http://www.askaboutireland.ie/reading-room/environment-geography/physical-landscape/) [assessed 31st May 2020]