The Gazabo of Lacken 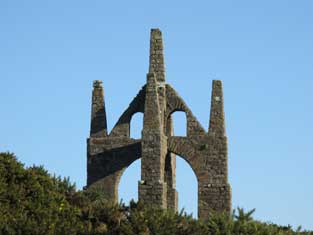 Lacken Gazebo is Mayo is one of the most conspicuous or curious sculptures.  It formed a double arch of rough stones.  It is situated on the summit of Lacken Hill to the rear of Castle Lacken: seat of the Palmer family from the sixteenth century.   Possibly constructed during the latter part of the eighteenth century by either Sir Roger or Sir John Palmer.  It was believed that Castle Lacken was erected on the former site of an ancient castle of the Mac Egan’s.  It may have had  ‘Masonic’  connections.  John O’ Donovan referenced the Lacken Gazebo during 1838.  According to local folklore the monument was constructed to commemorate the memory of Moira Brown wife of Sir John Brown: (he is remembered for his ‘dinnseanchas’)  His wife however, was revered in a vastly different light!  Rev. Fr. Thomas Walsh in his ‘Ecclesiastical History of Ireland’  referenced Moira Brown’s demise as an ‘odour of sanctity.’   It was reported locally that that on the day she died: ‘strange bells were heard ringing in the air.  It was thought they were the bells of Heaven.  When she died all around the house was dotted over with bright lights.  All the people who saw those lights said it was the angels that came down to accompany her to Heaven’.  Several Images, a map also a sketch feature on this site. [i]

Listed in the national inventory of architectural heritage the gazebo at Castlelecken in Killala, North Mayo was an eighteenth – century obelisk.  Erected by Sir Roger Palmer 2nd Baronet during 1794.  Due to the height one may view Ben Bulben or Knocknarea in Co. Sligo or the Donegal mountains on an exceptionally fine day.  Several images feature on this site. [ii]

This folly was erected by Sir John Palmer during the eighteenth century.  Access to the Lacken Gazebo is via a long, narrow path with three gates along the way.  It consisted of four square piers surrounded by semi-orders that met at a central point.  Four arched windows were above the point.  Each pier with the central point had an obelisk-like element.  Each adjacent pier had 3.8 metres between them.    Grid reference is G17222 37412.  Coordinates are 54. 19 43.74 N also 009 16 15.96 W.  Several images feature on this site. (25th June 2015) [iii]

This folly has one of the best viewpoints of the surrounding areas in north Mayo.  It is situated on the Hill behind Castlelacken ruins in Killala.  It is a structure of rough stones  known as The Gazebo. [iv]

A map of the gazebo with megalithic monuments of the area are featured on this site: http://www.mayowalks.ie/media/Media,20598,en.pdf

Gazebo at Parmerstown Demesne is referenced at this link: https://www.mayo-ireland.ie/en/towns-villages/lacken/lacken.html

David Hicks on Twitter during 10th November 2019 believed that the James Franklin Fuller’s sculpture in Beleek Woods in Ballina was modelled on the 1840’s Castle Lacken Gazebo at this link: https://twitter.com/davidhicksbook/status/1193534743117205504?lang=en

The unique stone structure known as The Gazebo is located near the ruins of Castlelacken:  https://www.paradisepossible.ie/Mayo/Areas-Routes/North-Mayo