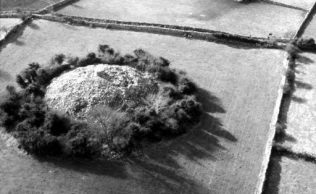 Ballymacgibbon Cairn is enormous yet unopened.  It is a relatively undisturbed cairn with the possibility it contains a hidden chamber or passage. It is believed to be a Neolithic Passage Tomb.  The limestone cairn is fifty-one meters in diameter also ten metres high.  It is surrounded by a low mound, or maybe on a platform like the large cairns in Co. Sligo.  At the base of the cairn in several place are visible kerbstones.  One kerbstone has interesting scratches or lines on its surface.  The large pile of stones on the cairn’s top may be an ordnance survey marker or trig marker.  Attached to the north side of the mound are the remains of a lime kiln.  Other monuments nearby include Knockma, Eochy’s Cairn also Nympsfield Stone Circle.  An image by Duchas of Ballymacgibbion Cairn from the air is featured on this page. [i]

This monument of Ballymacgibbon Cairn has two different sections.  The cairn itself is a lower one that has a base of approximately sixteen metres in diameter with a height of ten metres.  The upper section has a circular or regular stone collection.  This upper one resembles a small tower with a diameter of approximately 2.50 metres also a height of 1.80 metres.  The access is southwest to the top of this cairn.  Atop the cairn is a circular pile of stones of approximately 1.60 metres in height.  Grid reference M 17998 55402.  Coordinates are 53 32 31.74 N, 009 14 13.98 W.  The first two images on this page date from 2003 with the remaining seven from 2015.  (18th September 2013 Antonia D’Imperio) [ii]

Ballymacgibbon Cairn appears ten metres above the bushes, shrubs also trees that dot its boundary at this location.  This cairn has never been excavated.  It has a steep incline with a flat top & its enormous size is believed to contain a Neolithic Passage Tomb.  The cairn measures thirty-five to forty metres in diameter. It has a small addition or pinnacle on the top.  William Wilde mentioned that the cairn was erected to celebrate the Battle of Moytura as the site where two of the ancient tribes of Ireland the Tuatha Dé Dannann battled with the Firbolgs. [iii]

According to a legend Ballymacgibbon Cairn was built by the Firbolgs for King Eochaid to honour his triumph at the Battle of Moytura.   Ballymacgibbon cairn has never been excavated.  GPS is 53.54 221, 09.237.  (Several images by Ed Hannon may be viewed at this link from 18th July 2005) [iv]

This large cairn in Ballymacgibbon north is about thirty metres in diameter.  The cairn has not been excavated.  It has a height of over seven metres.  It is topped by a small cairn.  It is possible that the cairn covers a passage tomb that appears to sit inside a stone & earth enclosure.  Map Reference: M180554 (1180, 2554 )  Images by T. Mc Elleron featured on this site. [v]

Ballymacgibbon Cairn is recorded as one of Mayo’s national monuments.  It is situated atop a hill west of Cross village.  It is believed to have been constructed during the Neolithic period.  It has never been excavated.  Local historian & physician William Wilde (father of Oscar) claimed that the cairn was erected to celebrate the Battle of Moytura by the mythical King Eochaid mac Eirc.  Several stone circles may be viewed nearby. [vi]

Ballymacgibbon Cairn is an enormous limestone cairn of approximately fifty meters in diameter.  It is surrounded by a low mound.  The cairn is signposted on the right – hand side of the road as one travels from Cross to Cong. [vii]

Ballymacgibbon Cairn is a national monument located in Mayo.  It is situated atop a hill 1.4 kilometres west of Cross.  This cairn has never been excavated.  It was believed to have been constructed during the Neolithic era.  The cairn is a large limestone one & is thirty metres in width.  It is surrounded by a low mound.  Kerbstones are visible at rear of the site, one of those has interesting lines or scratches inscribed.  The sides are very steep with the top flat thus an indication that it possibly contains a passage tomb.  Towards the north side of the monument are the remains of a lime kiln. [viii]

This site has information by Tarquin Blake of Abandoned Ireland re Ballymacgibbon cairn with its historical significance to the area: http://www.abandonedireland.com/Ballymacgibbon_House.html

An image  features on this site of Ballymacgibbon Cairn: https://virtualglobetrotting.com/map/ballymacgibbon-cairn/view/google/