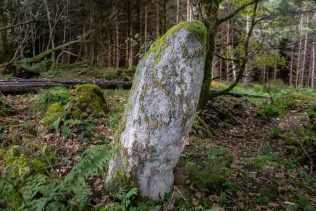 Blanemore Forest contains ancient monuments that date back to the Stone Age.  They were originally surveyed during the early 1960’s when the trees were planted.  They were then ‘lost’  prior to rediscovery in 1993 by a local student Liam Alex Heffron (who was then working in the nearby Ceide Fields Visitor Centre) with Prof. Seamus Caulfield, Noel Dunne & Noel Kelly.  Blanemore Forest is contemporary with the Céide Fields, it thus belonged to the first farming communities within these islands that began circa 3800 BC.  According to Seamus Caulfield’s (2001 Plan of the Ceide Fields Field Systems) pre bog walls in Blanemore Forest were revealed through the harvesting of the planted trees over them. (2c.)  Dated from 3800 BC to 3300 BC by pollen analysis at nearby Garrynagran bog early Neolithic farmers farmed extensively in County Mayo.  (Court Tomb Reconstruction from Paint the Past at http://www.philarm.com/default.aspx)  [i]

Court Tomb though roofless is well preserved.  It consists of a gallery orientated roughly northeast-southwest.  It was divided by jambs into two chambers with an opening from a small court of full-court design.  Considerable remains of the cairn surrounded the structure.  Gallery contained a great deal of fill also some large stones.  The cairn surface is very uneven but it rises to an average height of about one metre above the surrounding ground.  The entrance to the gallery is through a gap that is 0.4 metres wide between two well-matched jambs.  The most northerly of those was 0.7 metres in height whilst the other measured 0.6 metres high.  Five court-stones of 0.3 metres to 0.4 metres in height flanked the southern entry jamb.  The opposite arm of the court consisted of six stones with the court-stone furthest from the gallery entrance at 0.6 metres in height also it leans slightly southwards yet possibly marks the entrance to the court.  Several other court-stones on the northern side range from 0.2 metres to 0.35 metres in height.  Immediately north-east of the prominent court-stone (described above) is a well-set block of 0.5 metres in height that may have formed part of the court entry or may have represented a short entry passage.  The court itself measures 3.75 metres in width also  is 2.75 metres in length.  The first chamber is two metres in length & 1.5 metres in width. [ii]

Farmers erected tombs for their deceased members known as court tombs.  They consisted of a long rectangular or trapezoidal cairn at the broader end with usually an unroofed forecourt area that provided access to the roofed burial gallery, placed axially within the cairn also divided into two to four chambers.  A kerb of upright stones or drystone walling retained the cairn.  A kerb of upright evidence indicated that the galleries were used for repeated burials of mostly cremations over a lengthy period (possibly between 4,000 to 3,500 BC.)  The North Mayo region has the largest clusters of such tombs. (2b Court Tomb SMR No. MA021-044)  [iii]

The remains of a circa five thousand, five hundred year old ruined court-tomb is located within the vast concentration of such megalithic tombs outside of Killala Bay region.  The tomb consists of an ‘arc’ – shaped open entrance to the originally earth-stone covered chamber or chambers.  Nearby on the other side of the boardwalk another field wall may be viewed.  The granite boulders were also mixed with some conspicuous red sandstone rocks as preferred by the Neolithic builders. [iv]

Cairn appears as a rough rectangle about fifteen metres in length by ten metres in width.  It appears to narrow slightly from east to west.  Near its edge several heavy stones with hummocks in the heather-covered ground suggest a straight kerbing along the sides plus across the rear.  With one exception those only at the eastern end are drawn.  Just the large block 2.5 metres north of the central stone of the northern arm of the court may reliably be taken as a kerb stone.  It measures 0.7 metres by 0.45 metres also is 0.45 metres in height.  A second stone: the side of which is exposed near the cairn edge at three metres south of the southern arm of the court may possibly be a convincing kerb stone at a height of 0.35 m high.  Stone is set at 1.25 metres south of the western end of the gallery is 0.35 metres in height.  It closely resembles the gallery orthostats as it is placed with its flat surface towards the tomb.  A small recent cutting about one metre in depth exposed a section through the cairn at the southwest corner.  The lower 0.4 metres consists of clay.  This is apparently directly overlaid by the cairn.  The peat cover near the tomb is not deep.  Unfortunately, this site has been damaged by repeated planting or harvesting of trees from amongst the stones but hopefully the strict code of practice that now exists for the protection of archaeology within state forestry may contain the tomb’s secrets.  (Extract from the Survey of the Megalithic Tombs of Ireland  de Valera R. & O’ Nuallain S. 1964 (Ma 43: Tawnywaddyduff)   This site features maps also several excellent images. [v]

The remarkable Bronze Age stone row is roughly dated the same as the standing stone of Stop 3.  This row is aligned towards Nephin mountain.  The row of four visible stones may conceal yet more archaeology underneath the bog.  It is believed that the row may mark an important celestial event i.e. the winter solstice as the sun ‘appears’  to roll down the side of Nephin mountain as it sets. (Stop 5 A) [vii]

Neolithic pre-bog walls have been revealed in Blanemore Forest during the timber extraction process.  One such wall that ran back into the uncut forestry may be viewed as the pathway departs the gravel roadway onto the wooden tracks that led to this site. (2a).  The second Wall appeared as a low moss-covered line of stones approximately north-northeast, south-southwest axis at two metres from the court area of the tomb (2b) also it may be traced at least twenty metres back into the undergrowth.  Another more exposed line of a wall (2c) is situated over halfway between this tomb (2b) &  the standing stone (3) that ran perpendicular to the wooden trackway.  (These walls have not been surveyed) [viii]

These walls were constructed by the stone-age farmers as they cleared the fields of loose rocks then created pasture for livestock. [ix]

The forest trail is a five kilometres walk within coniferous woodland owned by Coillte. Stone structures have been uncovered beneath the bog to reveal further evidence of how Mayo’s earliest settlers lived over five thousand years ago.  The impressive standing stone in a sycamore grove is near the start of the trail.  These ruins were erected during a five hundred year period prior to the early inhabitants that abandoned the site circa 3250 BC as the climate became wetter plus the formation of the bog ensued.  A stone alignment in Blanemore Forest points in the direction of Nephin Mountain.  It possibly may have been erected to mark the winter solstice.  An image by Anthony Hickey features on this site. (One may view the YouTube video about Blanemore Forest Archaeological Walk, presented by historian, Liam Alex Heffron)  [xi]

One may view http://blanemoreforest.com  or download the free walking App for iPhone or Android smartphones.

These three articles have audio & videos on the link: https://pocketsights.com/tours/tour/-Blanemore-Forest-Walk-1149

A Facebook page with images or videos may be viewed at this link: https://www.facebook.com/blanemore/