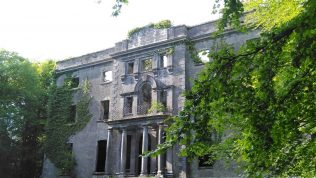 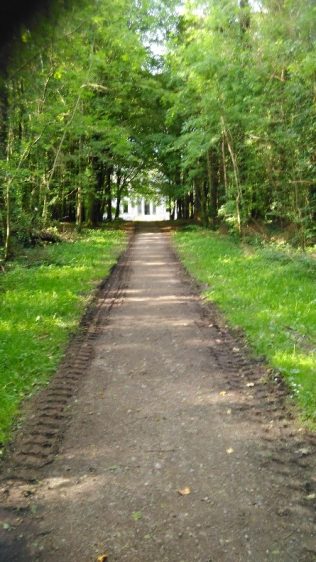 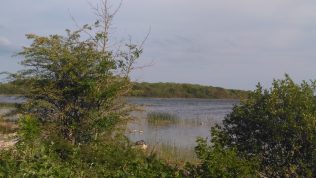 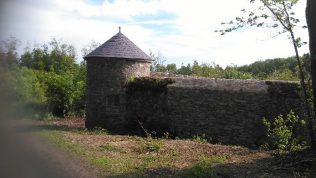 Moore Hall in a silhouette of sunlight on a summer’s day as I walk up the avenue shrouded in a canopy of trees.  Leaves dancing and shimmering in the summer breeze.  Glistening tones of sunlight shining like diamonds through the trees.

There is an eerie silence as I slowly reach the once mighty house, a shell of its former self.  The sun pours through its glass-less windows, cascading down its façade like liquid gold.

The lesser horseshoe bats have made it their home now, emerging at dusk. The once Great House is now their sanctuary. They are safe and protected in their historical habitat.

Moore Hall is built on Muckloon Hill, on the shores of Lough Carra, 2 miles from Carnacon village and 3 miles from my own  home place in Ballyglass, Claremorris, Co, Mayo.

The Moores were originally an English Protestant family and some became Catholic because John married a Catholic, named Jane Lynch, Athy, Co Galway.  They had five children and lived at Ashbrooke, Straide, Foxford, Co Mayo.  George Moore was one of these children.  George married Katherine de Kelly, an Irish Spanish Catholic.

George Moore, (1727-1799) built Moore Hall.  During the time of the Penal Laws, he went to Spain and made his fortune in the wine and brandy trade, in Alicante.  When the Penal Laws were relaxed, he returned to Ireland with a fortune of £200,000.  He bought the land on Muckloon Hill and the great residence of Moore Hall was built.  It was designed by John Roberts, an architect from Waterford who designed Waterford Cathedral, in County Waterford.

Moore Hall was built between 1792 and 1795.  George  Moore came from an aristocratic Irish family. The name George has been borne by family members through the generations.  George Augustus Moore (1852-1933) was a writer and he is buried on Castle Island on Lough Carra, overlooking Moore Hall.

The area around Moore Hall is a karst limestone area.  The lake has a marl bottom and lots of species of wild orchid can be found here, making it similar  to the Burren in County Clare.  The woods, rivers, lakes, and wildlife are pure and natural.

The locals around Muckloon warned George that it was an unlucky place to build a house.  He ignored this advice about his chosen site.  It was said that it was unlucky because of events in ancient history involving the killing of a Druid around 400AD, but the mansion at Moore Hall was build and produced eminent family members that would go down in history.

Moore Hall provided employment to the locals and big houses needed many servants.  Moore Hall was also centrally located, only 8 miles from Castlebar and the old road heading towards Ballyglass, was the main Castlebar to Ballinrobe road at that time.  Claremorris was only a few miles away also.

Moore Hall House features 2 bays on each side of a central block, similar to Tyrone House, County Galway.  Tyrone House was also designed by John Roberts.  It has a triple window, framed by short fluted pilasters, on console brackets, above a Venetian window situated above the entrance door. This is beneath a shallow single storey Doric portico or column.  Doric columns are stout columns of Greek origin.  The top of the portico is treated as a balcony with ironwork railings.

George’s son, John Moore (1763-1799) was the first President of Connaught in 1798, having been given the title by General Humbert.    George Moore spent over £2000 defending his son John at the 1798 rising.  His son was captured and sentenced to deportation.

George went blind from a stroke before his death in November 1799, one month before his son John died, en route to New Geneva.  George is buried in Ashbrooke, Straide, Foxford, Co Mayo.

John died in Waterford in 1799, before he had the opportunity of getting to New Geneva and was buried in Waterford.    His body was exhumed in 1961 and brought to Castlebar, in County Mayo, where he was buried with full military honours at the Mall in Castlebar.

John Moore was a statesman and rebel leader who died at the young age of 36 years old.  He was educated at the Catholic school of Deuai in Northern France and Paris university.  John joined the French army in 1798.  General Jean Joseph Humbert was the commander and chief of the army in Ireland.

General Humbert made John Moore, President of Connaught, but just weeks after him being made President, he was captured in Castlebar. John Moore was sentenced to transportation and he was to be taken to Duncannon Fort in Wexford, bound for New Geneva.  He died in the Royal oak coaching inn, Waterford city.  He was buried in Ballygunner cemetery, County Waterford, and his remains were found in 1960.

His body was exhumed and brought back to Castlebar, County Mayo and he was buried with full military honours at the Mall in Castlebar.  Those in attendance at the reinternment were the President of Ireland, Eamon De Valera, Tanaiste, Sean Lemass, numerous TD’s, the Ambassadors of Spain and France and John Moore’s living relatives, including Maurice G Moore, from California who erected the plaque at Moore Hall at a later date.  He is Maurice Moore’s son and the great grand nephew of John Moore.  Maurice G Moore is also the nephew of George Augustus Moore, the writer buried on Castle Island, on Lough Carra, overlooking Moore Hall.

George Henry Moore (1810-1870) loved horses.  At the height of the Great Famine in Ireland, he entered a horse called ‘Corunna’ in the Chester Gold Cup, in England.  He imported tonnes of grain, on the ship, ‘The Martha Washington’, to feed his tenants from his winnings.  He won £17000 and in a letter that he wrote to his mother from Chester, he explained how he wanted the money spent. He often wrote to his mother and in this letter, he sent his mother, £1000 to alleviate the suffering of the poor in Moore Hall.

He told her in his letter that this money would be very useful to the poor and his tenants would have plenty of everything for the winter season.  He gave a couple of hundred in mere charity to the very poor for a cow, or if they had a cow already, then they could get some other article of necessity that they really needed, so that the horses would gallop all the faster with the blessings of the poor.

It is said that nobody was evicted or died in Moore Hall during the famine because of his kindness. George Moore died of a stroke and he was attended to by the parish priest of Carnacon, Fr Lavelle.   He is buried in the family vault in Kiltoom, Moore Hall.

George was also an Irish politician and served as a Member of Parliament for Mayo.  He was a great advocate for County Mayo and involved in famine relief.  He was leader of the Independent Irish Party or league as it was known and Charles Gavin Duffy was also involved in this party.  This was an Irish political party at that time.

Upon his death, his coffin was carried by 16 tenants to the church in Carnacon and large numbers of the poor attended but not many gentry.  He death resulted from a stroke in 1870 and he is buried in Kiltoom in Moore Hall.

The name of the horse ‘Corunna’ that won George Moore, a small fortune is also the name of the famous battle that was fought at Corunna.  Corunna is a port city in the Galicia region of North West Spain.

During the Peninsular War in 1809, which was part of the Napoleonic war, Sir John Moore, (1761-1809) who was Scottish was killed and he was the leader of the British Army.  The Battle of Corunna ensured the escape of the British army from Spain.

George Moore also encouraged his tenants to grow alternative crops to potatoes and purchased livestock for them.  Mayo was one of the most severely affected counties in Ireland during the famine, but because of George Moore’s kindness, and generosity, none of its tenants starved or died because they had enough to eat. Its such a pity there were not others like him to save the starving poor of Ireland.

George Augustus Moore, 1852-1933 was an Irish writer, born in Moore Hall and a brother of Maurice Moore.  He studied art in Paris, as that was his first love.  He was friends with William and Oscar Wilde.  He also met the artists, Claude Monet and Renoir among others in Paris.

He attended Oscett College near Birmingham, and that’s where Maurice studied too.  He inherited Moore Hall Estate but gave the running of it to Maurice.  He was more interested in studying art in Paris.

He lived in Dublin for a while and was friendly with Lady Gregory and W.B. Yeats.  He wrote many literary works and poetry including, “confessions of a young Man” and “Flowers of Passion” to name a few.

George Augustus Moore died in London leaving a large fortune.  His urn was brought back to Moore Hall and buried on Castle Island, in Lough Carra, overlooking Moore Hall on Muckloon Hill.

Maurice Moore (1854-1939) was a lieutenant in the Connaught Rangers in the Boer war. He was the last Moore to live at Moore Hall.  Maurice joined the Irish Volunteers, led by John Redmond, but left them after the Easter Rising of 1916.  He joined Sinn Fein and he accepted the Treaty and was elected to the Seanad in 1922.

Anti-treaty people attacked properties of Senators, leaving Moore Hall vulnerable.  In 1923, armed men demanded the keys off the caretaker, and burnt Moore Hall.  Moore Hall had a very valuable library, Oak panelling on the walls and amazing Italian plasterwork. Moore Hall had 30 rooms, its own sacristy and chapel.   All this was destroyed in the fire.

The land commission bought Moore Hall, but Maurice kept the ruins because he had a son called Maurice, but he was known as Rory, and he lived i in America and Maurice senior hoped Maurice Junior, would restore Moore Hall.  The Great Depression of 1932 and the drought put a stop to that dream.  Maurice died in 1939, having sold Moore Hall and its beautiful surroundings to a timber merchant called John O’Haire who cut down all the beautiful trees.

Then the timber merchant sold the estate to the department of forestry and as the years went by Moore Hall could no longer see Lough Carra, because Coilte, (forestry department), planted trees that blinded the view of the lake.

Thankfully in 2018, Mayo County Council bought Moore Hall and its heart-warming to see the Victorian walled garden and dovecote restored and hopefully it will become a tourist attraction and a beautiful place for us all to enjoy.

Whether some restoration works will be carried out on the Great house, remains to be seen.  It’s now a protected wildlife structure for the lesser horseshoe bats.

If one looks closely at the walls on its façade, remnants of the fine Italian plasterwork can still be seen.  Moore Hall is a precious jewel in the landscape of County Mayo, having a very special place in the hearts of the people of Mayo, and Ireland, as a nation.

All photos by Mary Boyle