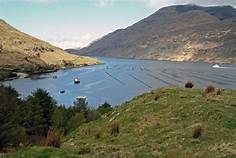 Several areas of Europe have fjords: however several are less pronounced due to the limited exposure of westerly winds. Within Ireland there are three fjords situated at Carlingford Lough & Lough Swilly with another in the Connacht region. [i]

Fjords were formed when glaciers cut through u-shaped  valleys by ice segregation & abrasion of the surrounding bedrocks.  According to standard models these glaciers were formed in pre-glacial valleys that had sloping valley floors.  An over deepened formation of fjords as the ocean flooded. This glacial ice melt was accompanied by the rebounding of earth’s crust as both the ice load with the eroded sediment was removed. This was called isostasy.  Most fjords were deeper than the adjacent sea: these had a sill or shoal  i.e. bedrock at their mouth that was caused by the previous glacier’s reduced erosion rate & terminal moraine.  The evidence of glacial erosion is widespread in several Mountainous areas.  Over – deepened rock hollows, man water-filled represented the corries or cooms: where the first snow lay then thickened also it nourished the ice.  From theses mountainous Locations ice advanced down into valleys where the ice retreated.  Several other expressions of glaciation were sharp ridge or arêtes between the valleys or heavily-scoured rock surfaces, over deepened main valleys several may have had a u-shaped cross-profile.  [ii]

The name is derived from old Norse Kerlingfjǫrðr  that translates as ‘narrow sea-inlet of the hag.’  Carlingford Lough, Cairlinn, Carlinford Loch or even as Cairlinnfurd Loch is one of Ireland’s three fjords.  It is attributed to this glacial fjord or sea – inlet that forms part of Norther Ireland’s border with the Republic of Ireland to its southern side.  On the northern side is County Down.  Southern Co. Louth is backed by the Mourne Mountains.  At its extreme angle on the northern corner it is fed by both the Newry Canal & River.  [iii]

Included in the area are mudflats, saltmarsh, small rocks & shingle Islands on the border with the Republic of Ireland.  Coordinates for the Lough are Northern Ireland; 831 ha; 54 03 N,  006 0 W. Special protection area EC Directive, SSSI.  [iv]

The name of Carlingford is a Scandinavian translation of a ‘Fjord of Corlinn.’  [v]

This fjord is referenced in the The Four Masters Annals of the Kingdom 1856 (Hodges Smith & Co. Dublin ) (page 43 1565) as Cuan-Snamha Aighneach & Carlingford Lough Baile-Eoin-Cabh-ann-Snamh-Aighneach (page 107)  [vi]

An inlet of the Irish Sea separates the peninsula of Co. Louth, Ireland from the Mourne Mountains & Newry district within Northern Ireland.   Newry town is connected with Carlingford Lough which is sixteen kilometres in length & two to four miles in width at its northern coastline.  [vii]

Within Co. Donegal a significant feature of the Wild Atlantic Way is the indented rugged fjord-like coastline that spans four hundred miles.  [viii]

Lough Swilly or Loch Suílí means ‘Lake of Shadows’  or ‘Lake of Eyes.’   It is a glacial fjord or sea inlet that lies between the western side of the Inishowen Peninsula & the Fenad peninsula in Co. Donegal.  It has been recorded on Ptolemy’s ‘map of the world. ‘    Several early Stone Age monuments & Iron Age fortification feature along its shores.  Shell middens  are dated to approximately 7,000 BC within the area.  According to Séan Pierce in Sweeping Swiftly over Swilly  in The Irish Times  (20th August 2011 ) ‘Loch Súilí ‘  means the ‘Lake of Eyes’  or ‘Lake of Shadows.’   It is a glacial fjord bordered by two peninsulas, namely Inishowen & Fenad.’   [ix]

Killary Harbour Fjord or An Caoláire Rua is located in western Ireland along the border between counties Mayo & Galway.  The flooded valley is sixteen kilometres  in length, at its centre it is over forty-two to forty-five metres in depth.  The sea level is higher outside the mouth of the valley.  It becomes very narrow at its innermost section.  For centuries Killary had been known as the only fjord within Ireland.  It has been known as ‘one of 2-4 fjord-type inlets.’   Despite arguments ‘that it lacked extensive steep cliff walls without the consideration of the deep underwater side of the valley with the shape of its bed:’ in a peer – reviewed paper An Oceanographical Survey of Killary Harbour…it concluded that Killary was a fjord.’   [x]

Killary Harbour is Ireland’s only true fjord.  It extends sixteen kilometres in from the Atlantic ocean to its head at Ashleagh.  It forms the border between two counties i.e. Mayo & Galway.  The northern side has Connacht’s highest Mountain Mweelrea while the Twelve Bens with Maumturk Mountains are located towards the southern end.  It has a depth of over forty-five metres at its core.  [xi]

The Killary Glacial Fjord acts as a natural border between two bastions of traditional Ireland namely counties Mayo & Galway.  Delphi Valley has three lakes: Glencullen, Doolough also Finnlough that run into the Bundorragh River then on into Killary Harbour.  [xii]

The long narrow steep-sided inlet at Killary Harbour is certainly among one of the most impressive fjords.  Here the sea has been inundated with the glacially-deepened trough that produced a landscape reminiscent of a Norwegian Fjord. [xiii]

Nairn Richard Ireland’s Coastline: Exploring its Nature and Heritage 2007 (Collins Press Cork) described the area as ‘the long, narrow fjord of Killary Harbour is only a few metres wide, (it forms the border counties of Mayo & Galway)   A glacier must have scoured the bottom as it moved towards the sea.  It also took large volumes of rock & gravel with it.  The depth reduces dramatically just outside the entrance.  There are a number of rocky islands that give a profile typical of the fjords of Scandinavian.’   Geographical coordinates are latitude at 53.96 52 78: with longitude at 10. 19 27 78.  [xiv]

Dotted with mussels rafts (see image) the long narrow Killary Harbour is often referred to as Ireland’s fjord at sixteen kilometres inland.  It is more than forty-five metres deep at the centre.   Leenane village is on its shore with Mweelrea Mountain at a height of eight hundred & fourteen metres  to its North side.  [xv]

Carlingford Loch is referenced by Whitlow J. B.’s  Geology and Scenery in Ireland  1974  (Penguin Publishers) at this link: https://www.amazon.com/Geology-Scenery-Ireland-

An interesting article on the link of John Newton with Lough Swilly in Northern Ireland is when his cry for assistance was heard during an Atlantic storm with the safe arrival at the Lough.  It may be viewed at this site: http://www.amazinggrace.ie/newton-in-ireland.html

This section of the above link provides details of the origins of the hymn ‘Amazing Grace’  by John Newton which originally was called ‘Faith’s Review & Expectations’: http://www.amazinggrace.ie/

A beautiful image of Lough Swilly in Co. Donegal features on this site: https://www.wildernessireland.com/blog/

A reference to Killary Harbour in The Annals of the Kingdom of Ireland  by The Four Masters may be viewed at this link: https://archive.org/details/annalsofkingdomo07ocleuoft

Killary  Harbour is referenced at this link: https://www.irishexaminer.com/lifestyle/outdoors/richard-collins/thoughts-turn-to-accounts-of-historic-seal-spots-458241.html

Killary is Ireland’s only fjord as a nine-mile stretch of water referenced at this link: https://www.irishtimes.com/news/even-the-dolphins-like-killary-s-cruise-vessel-1.254959

One may view timetables of the tides at this fjord on this site: https://www.tidetimes.org.uk/killary-harbour-tide-times