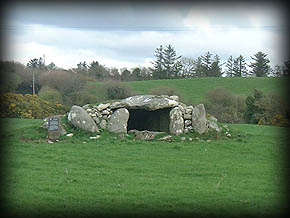 This perfectly preserved Carrowcrom or Cheathrú Chrom Wedge Tomb in Co. Mayo is marked on the Ordnance Survey map as ‘Dermot & Grania’s Bed.’   This monument is located in the townland of Carrowcrom, south-west of Bunnyconnonlan village &  east-south-east of Ballina.  The tomb is orientated north-east-south-west with the entrance at the south west.  Monument consists of a chamber of  3.1 in length also 1.4-1.2 in width.  Two side-stones are lined on either side to form a near perfect wedge shape.  Two over-lapping roof-stones two metres in length slope towards the back.  The first two side-stones along with two erect orthostats of six metres in length form a frontal façade between have adjacent smaller slab stones that form dry-stone walling.  The entire monument is surrounded by a small ‘U ’-shaped cairn of six metres in length by 6.5 metres in width also 1.5 metres in length at the west end; it decreases in height towards the east end.  Coordinates are 54. 5 21.74 N, 9. 2 49. 04 05 W. (Placenames Database of Ireland 2016)  [i]

Carrowcrom Wedge Tomb is a national monument located seven kilometres east-south-east of Ballina.  It has been preserved over the years with additional field clearance stones adjoined to the sides.  It is ‘U’  shaped in appearance with a façade either side of the gallery entrance.  Gallery at its entrance is approximately 3.5 metres in length also 1.5 metres in width.   It runs south-west-north-east also tapers in slightly towards the block of loose stones at its north-east end.  A wide low stone is set across the entrance: that may have been an original sill.  Four orthostats on either side of the gallery are visible from the interior. They stand a metre high at the entrance then gradually decrease in height towards the gallery’s rear. This gallery has both roof stones in place with the first stone overlapped as it rests on the rear.  These were fitted with dry stones or chock stones to the top of the gallery orthostats.  When viewed from the outside the gallery orthostats & rear roof stone are concealed by cairn material. (June 2002)  [ii]

This national monument of Carrowcrom Wedge Tomb lies 7.2 kilometres  east-south-east from Ballina, Co. Mayo also 4. 8  kilometres north-north-east of Attymass.  It retains its single capstone.  The taller front south-west end of the tomb has a façade with four large orthostats 3.7 metres in length at the entrance.  Most of the out walling is visible especially at the east side.  The interior of the gallery has dry-stone walling above & also between the orthostats.  Latitude is 5 45 24 N, longitude 9 2552 W.   It is three kilometres from the Carrower Ogham Stone. (June 2002)  (Dempsey regrets the fact that the National Monument sign is too close to the tomb)  [iv]

Three kilometres north-east of the Carrower Ogham Stone within Co. Mayo lies the perfectly intact Carrowcrom Wedge Stone.  It has four large orthostats with dry-walling in between at the entrance’s front. (Images feature by Jim Dempsey at this link)  [v]

This tomb as Gailge is Tuama Dinge na Ceathrún Croime: it is a national monument under state care.  Carrowcrom Wedge Tomb is located seven kilometres east-southeast of Ballina in Co. Mayo.  It was erected circa 2500-2000 BC. The wedge-shaped monument is 3.1 m in length by 1.3 m in width.  Both sides have two orthostats. Two roof stones cover the gallery.   The entire structure has a ‘U ’shape cairn that faces southwest towards the setting sun.  [vi]

Carrowcrom Wedge Tomb is located nine kilometres south of Ballina in Co. Mayo.  This well-preserved national monument is dated to circa 2500-2000 BC.  The gallery is approximately a short façade that consists of 3.5 metres in length with an entrance opening of 1.5 metres in width.  It is flanked on both sides by four large orthostats with drywalling between them.  It is covered by a single two metres long capstone.  This monument was associated with the legend of Diarmuid & Grainne: on older maps it was referenced as ‘Dermot & Grainne’s Bed.’  Coordinates are 9.04 78 84 by 54. 08 99 43. (2014-2020) [vii]

Several images of Carrowcrom Wedge Tomb may be viewed at this link: https://www.themodernantiquarian.com/site.php/4136/carrowcrom.html

One may access this site for information on heritage sites: https://www.mayo.ie/heritage/archaeology-built

Publications that reference Carrowcrom Wedge Tomb include the following: