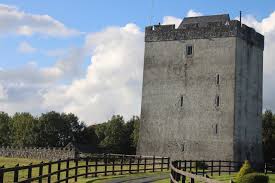 This castle is located in south Mayo: it is a fine example of the tower house that has been restored from a ruin into a residence.  Turin Castle was established during 1574 by Walter Mac Redmond Burke.  References  exist of an earlier castle on the site.  Some of that fabric was incorporated into the present tower now located in the demesne with the estate visible towards the north.  The original house was demolished during the 1940’s.  Partial remains are visible of the walled garden.  A defensive feature machicolation may be seen at parapet level that protected the main entrance.  The main doorway had dressed jambs with a pointed arched head on the north east wall.  Floors were located on this face: four of which lit the staircase.  A circular loop was found by the door whilst a double light ogee-headed window was found on an upper story.  Exterior is now covered with harling to prevent water ingress.   An Invitation to the Medieval Castle types of Mayo (Muirne Lyons) (pages 74-89)  [i]

Kilmaine Castle in Co. Mayo was once owned by the de Burgoe family.  It was abandoned during the eighteenth century when the family moved to the Manor House.  The building was idle for two hundred & fifty years until it was restored as a business enterprise with accommodation during 1997.  This site features a video of the castle. [ii]

The exact date of Castle Turin’s establishment is not available but according to ‘The medieval chronicler ‘ O ‘Donovan: the English-Norman house of de Burge were believed to have founded the building.  That family were one of the most influential houses within Ireland & England during the thirteenth & fourteenth centuries.  Possibly the name ‘turin ‘ came from the old Irish ‘small bleaching fields ’ a reference to the local whitewashed stones.  The house of Burke descendants created two branches of the Clan Mac William.  Building formed part of a defensive structure  that protected the trade route from Lough Corrib to Galway.  One propitiator of Turin Castle was Walter Merimont: according to a note that stated he was a member of the army of Clan Sionin in Kilmaine during the 1570’s. [iii]

Turin Castle was a fine example of a medieval square towered fortress located in the barony of Kilmaine.  It is one of the forty-one recorded castles that belonged to the Norman De Burgo’s during the 1580’s.  The family later became Gaelic chieftains of the clans of Bourke / Burke. [iv]

Castle Turin was constructed by the de Burgos: it was situated in the barony of Kilmaine.  Records report that it was abandoned for at least two hundred & fifty years until its restoration during 1997.  It is now an hotel owned by Brendan & Marnie Farrell.  This site features a video of the present castle. [v]

This structure is now an hotel located in the barony of Kilmaine surrounded by sixteen acres of pastureland.  At the top of the castle stairs is a large room furnished with tapestries also several antiques.  The trussed roof was modelled on Dunsaghly Castle.  Behind a bookcase is a ladder that leads to a secret chamber.  The great hall has a huge stone fireplace with a vaulted ceiling that runs to over twenty feet.  A seventeenth century oak table is located in that area.  Various images feature on this site.  [vi]

This site features several images with a video of the refurbished castle: now an hotel venue. [vii]

A Facebook page refers to castle at this link: https://www.facebook.com/Turincastle/