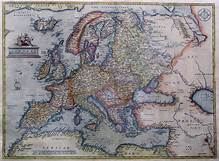 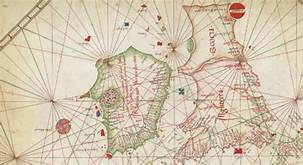 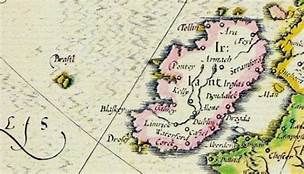 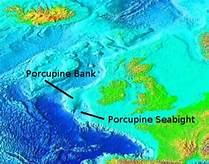 Hy-Brasil is variously spelt as Hy-Brazil, Hy-Breasal, Hy-Breasil, or Brazir.  Its name may be derived from Old Irish ‘hy’ a variation of  ‘í’ that meant ‘island’ or ‘brasil’ from the root word ‘bres’ as it meant ‘beautiful / great / mighty.’  [i]

This island’s name in Celtic folklore history was attributed to Breasal the High King of the World who may (or may not) have been related to Bresal Echarlam mac Echach Baethlaim from theTales of Lugh  at Tara.  [ii]

Another interesting aspect is the presence of the name Brasil in proper names, place-names or family names within Ireland.  In a telephone directory for Tralee, Co. Kerry variations of the surname were Brassil, Brassill, Brazier, Brazil, Brazill also Brazzill while a small grocery store was called Brassils Store also in Ballyheigue was Brassilo’s Guest House.  [iii]

Edward Mac Lysaght’s More Irish Families  references that Brassil or Brazil or again O‘Brasil are Anglicized versions of the Irish surname O ’Breasail from counties Waterford and Offaly.  He stated that the name O Bressyl was recorded in 1285 while O ‘Brasil existed in 1308.  [iv]

The legend dates much further back possibly into pre-Christian eras. It first appeared in the seventh century in an Irish text known as The Adventure of Bran Son of Febel  that recalled the tale of Bran’s visit to this other world island ‘supported on pillars of gold where games were played, people are always happy, there is no sorrow or sickness, and music is always to be heard-truly a land of the blessed.’   The story of Hy-Brasil was also used to reinforce Christian doctrine.  This was discovered in a rare text: Voyage to O ‘Brazeel  or the ‘Submarine Island ‘  that provided a brief description of the customs, manners, government, law also religion of the island’s inhabitants.  A manuscript written between 1558 & 1603 provided a report of a fantastical journey to O ’Brazeel, a ‘submarine island ‘  that sunk off the west coast of Ireland.  Below the waters (enclosed in a type of huge bubble) was a small  country: a land of virtue and Christian faith with happy people.  The island was purported to be shrouded in mist or appeared briefly once every seven years.  It was the home of a wealthy or highly advanced civilization.  There were reports of gold roofed towers also domes &  healthy cattle.  [vi]

Hy-Brasil was noted on nautical charts as early as 1325: on the Genoese cartographer Angelino Dulcert’s map that he identified  it as ‘Bracile.’  It later appeared in the 1375 Catalan atlas which placed it as two separate islands with the same name ‘Illa de Brasil.’   During 1436 the Venetian cartographer Andrea Bianco called it ‘Sola De Brasil.’  On the Ortelius map of Europe & Europa Mercator maps 1595 the island appeared in various locations.  The island appeared as a perfect circle with a semi-circle channel through the centre thought to have been a river.  Saints Brendan also Barrind both attested to this information on walking the island.  [vii]

Unsuccessful expeditions to discover the island’s location occurred that included the great voyage of John Jay Jr. during 1840.  Navigator John Cabot’s (Giovanni Caboto) letter detailed his success of his visit in 1497 thus led to the myth of the ‘island appearing from the mist every seven years’  [viii]

One of the most famous visits during 1674 to Hy-Brasil was by Scottish Captain John Nisbet of Kellybegs, Co. Donegal.  While in familiar waters a fog rose up but when it lifted:  they were very close to rocks.  Getting their bearings, the ship anchored in three fathoms of water, then four crew members went ashore.  They spent the day on the island before they returned with gold & silver gifted to them by an old man.  Later a second vessel under  Alexander Johnson’s command visited the island where they also were treated with hospitality.  [ix]

Several references to Hy-Brasil are included in poems, novels or old manuscripts also works by famous Irish writers i.e. W. B. Yeats who reproduced Gerald Griffin’s poem Hy-Brasail, the Isle of the Blest  in his publication Fairy and Folk Tales of the Irish Peasantry during 1888.

‘Hy-Brasail-the Land of the Blest’  by Gerald Griffin;

On the ocean that hollows the rocks where ye dwell

A shadowy land has appeared, as they tell;

Men thought it a region of sunshine and rest,

And they called Hy-Brasail, the isle of the blest.

From year unto year on the ocean’s blue rim,

The golden clouds curtained the deep where it lay,

And it looked like an Eden, away, far away!

A peasant who heard of the wonderful tale,

In the breeze of the Orient loosened his sail;

From Ara, the holy, he turned to the west,

For though Ara was holy, Hy-Brasail was blest.

He heard not the voices that called from the shore –

He heard not the rising wind’s menacing roar;

Home, kindred, and safety, he left on that day,

And he sped to Hy-Brasail, away, far away!

Morn rose on the deep, and that shadowy isle,

O’er the faint rim of distance, reflected its smile;

Noon burned on the wave, and that shadowy shore

Seemed lovelily distant, and faint as before;

Lone evening came down on the wanderer’s tract,

And to Ara again he looked timidly back;

Oh! far on the verge of the ocean it lay,

Yet the isle of the blest was away, far away!

Bear him back to his own peaceful Ara again.

Rash fool! For a vision of fanciful bliss,

To barter the calm life of labour and peace.

The warning of reason was spoken in vain;

Night fell on the deep, amidst tempest and spray,

The last documented sighting of the island was during 1872 when Roderick (Ruairíe ) O ‘Flaherty with author T. J. Westropp saw the island appear & then vanish.  It was Mr. Westropp’s third viewing of Hy-Brasil but on that occasion he had his mother with some friends along. [xi]

In A Chorographical Description of West or H-Iar Connacht (1684) Westropp reported that ‘there is now living, Moragh (Murrough) O ‘Ley, (O Laoí ) who imagined he was personally on O ‘Brasil for two days, and saw out of it the Iles of Aran, Golamhead, Irrosbeghill, and other places of the west continent he was acquainted with.’   [xii]

John O ‘Donovon an Irish language scholar & writer elaborated on the story during 1839 when he stated that ‘O ‘Laoí was a sailor of a ship that landed on the island; when they prepared to leave a stranger handed him a book but he was ordered not to open it until seven years had passed.’  He followed the instruction & that enabled him to take up a career practicing medicine with surgery.  Apparently, that book contained secret lore to treat illnesses.  [xiii]

The last mention of Hy-Brasil was possibly within the Bannister David & Moreland Carl edition of  Antique Maps as it provided a brief account of the islands presence on maps also sums up its impressive life: ‘It is hard to believe that as late as the eighteenth century seamen still seeking these islands and so often had Brazil been ‘sighted’ that geographers were reluctant to abandon the possibly of its existence: in fact it was finally removed from British Admiralty Charts in the 1870’s’   The island was last noted as Brazil Rock during 1865.  [xiv]

During December 1980 Sargent Jim Penniston telepathically received sixteen pages of a binary code from an encounter with a UFO (called the Rendlesham Forest Incident) by touching the craft outside a military base in the U. K.  The code listed very specific coordinates of Hy-Brasil; (52. 0942532N 13. 131269W )  He also received the coordinates of several ancient sites worldwide that included; Pyramids of Egypt, Nasca Lines in Peru, Greece, Sedona in Arizona, Northern Mountains in China, Australia.  [xv]

A  link to the binary code may be accessed at this site : http://www.therendleshamforestincident.com/Hy_Brasil.html

One may view a very interesting text from Gary Osborn 2012 at this link: http://garyosborn.moonfruit.com/hy-brasil/4565482642

Evidence of geological land mass changes in that western part of the Atlantic Ocean. The island’s disappearance may have been attributed to that event. [xvi]

The so-called Porcupine Bank discovered during 1862 appeared to have been an island at some point in time.  Located about one hundred & ninety-three kilometres west of Ireland, it is a shoal exposed at extreme low tide where an 1830 chart had ‘Brazil Rock’ located on it. The bank’s highest point is around two hundred metres below sea level: it was possibly sunk due to a catastrophe or rising sea level. (Hill Bryan, 16th August 2015)  [xvii]

Cunliffe B. Facing the Ocean: the Atlantic and its peoples  2001 PDF (Oxford ) One may download at this link: https://www.academia.edu/43308259/Barry_Cunliffe_On_the_Ocean_The_Mediterranean_and_the_Atlantic_from_Prehistory_to_AD_1500_Oxford_University_Press_2017

Johnson D. S. Phantom islands of the Atlantic: the legends of seven that never were  1997  (London): https://www.historyireland.com/an-island-called-brazil/

Westropp T. J.  Brasil and the legendary islands of the North Atlantic: their history and fable. A contribution to the ‘Atlantis’ problem  (pages 192-13 ) (Dublin): https://www.biblio.com/book/phantom-islands-atlantic-legends-seven-lands/d/1342060473

As early as 1870 a paper was read to the Geological Society of Ireland re the island.  In an edition of 1883  Notes & Queries also during the twentieth century Graham Hancock’s Underworld; The Mysterious Origins of Civilization  was published. [xviii]

A recording of poem may be accessed at this link: https://www.joeheaney.org/en/hy-brasail-the-isle-of-the-blest/

(Intrigued you?  As stated, this island it purported to be shrouded in mist except for one day every seventh year so incidentally last sighting was supposed to have been in 2020: one may wait for a glimpse during 2027!!  N B C)