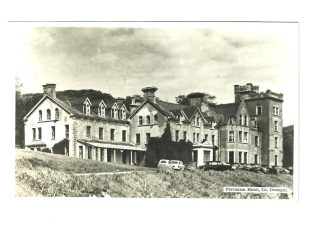 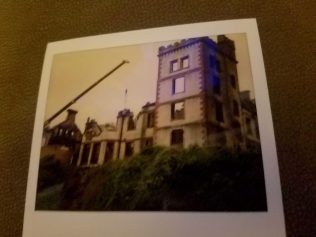 Situated in one of the most picturesque areas of the Fanad Peninsula lies Portsalon. The Babington family Greenfort were the estate owners of Portsalon and the surrounding neighbourhood.

Baptist Johnston Barton, (1775-1819) married Catherine Babington on the 29 October 1815 and hence started the reign of the Bartons in Portsalon, and would see the family establish roots that would remain until the 1970s. There were family residences also in Stormount House and Rockmount House, and their shooting lodge was underneath the hill, sheltered from the north winds and with it’s grounds sloping to the the very mouth of the tide.

The Great Hunger of the 1840’s would see the landed gentry not so well off as previous times and by the 1870s Baptist Barton (1848-1914) who had married Isabel McLintock had to make a serious decision as to how they were going to educate their children. He was seriously thinking about moving the family to Germany when his older sister Kate came up with the idea of starting tea rooms at the shooting lodge as a means of creating extra income. These tea rooms started in 1881 proved to be so successful that with the backing of her brother Baptist she departed for Switzerland to study hotel management and upon returning she set about converting the tea rooms and shooting lodge into an hotel of modest proportions and which was opened by her brother Colonel Baptist Barton in 1889.

The story was handed down in Portsalon folklore

Baptist saw the potential of the expanse of land stretching from the hotel and he had the Portsalon links laid out in 1891 by Mr. R.A. Collings and asssisted by Thompson of Portrush. The expanse and potential of the grounds afforded plenty of scope for 18 holes and he was quick to see the benefits of membership of the inauguration of the Golfing Union of Ireland in 1891, in boosting success of both the links and the newly refurbished hotel. He then applied for a liquor license for the hotel, which immediately brought an objection from a neighhbouring publican, a Catholic of course; anyway his rival lost his case and Baptist now had his license which his defeated rival put down to “that bloody orange majority “. The story goes that he was chatting with his sympathisers after the hearing, and he said “let him alone boys; wait till he gets to hell, he’ll find no orange majority there”. The publican’s lawyer thought this so hilarious he repeated it to Baptist’s lawyer, so the story was handed down in Portsalon folklore.

Remarkable for the deep golden hue of it’s sands

The hotel went from strength to strength and by 1901 was doing so well that more bedrooms were added. This was an hotel that could offer just about everything a holiday maker could want. The hotel stood in it’s own extensive grounds, alone yet not isolated; twice a week there was a sailing of the Lough Swilly Steamboat Company’s vessels between Fahan and Portsalon, and the telegraph office in close proximity also.

To the right of the hotel was the beautiful Stocker Strand, a couple of miles in length and so remarkable for the deep golden hue of it’s sands, and after a trek across it you could take the mountain tram up the side of Knockalla mountain and go to view the beautiful Black Lakes and extensive views of Mulroy, Melmore, Horn Head and Tory in one direction and then the Inishowen Peninsula, Trawbeaga Bay and Malin Head in the other direction.

A short walk from the hotel brought you to the Three Mouth Cave and a little further along the famed Seven Arches, not to mention the Doaghbeg Cave and the Great Pollet Arch just a little further along the coast. There was also hotel transport if one wanted a days sightseeing say to the Lighthouse and Coastguard Station; or a picturesque drive to the fishing village of Ballywhoriskey where Gaelic was the spoken tongue and where the kelp burning industry could be observed in full swing in early summer as could be the granite works.
Drumnacraig Hill with Lough Goragh and Doire were a must for the angler and game sportsman. Springfield Hill and Murrin Hill to be explored also and not forgetting the golf, tennis and croquet.

The bathing was excellent and safe

Other places of interest for the visitor were the ruins of Morass Castle, the ancient feudal keep of the MacSwines, the Dolmen or Druid’s Alter, near Kerrykeel and of course the ancient well of Colmcille at Carroblagh. The bathing was excellent and safe, with comfortable dressing rooms available on the shore. The hotel could also boast that it overlooked the historic Lough Swilly.

The year 1587 saw the abduction of Red Hugh O’ Donnell and his fellow chiefs from Rathmullan, where they were enticed on board a ship under the pretence of “ sampling fine Spanish wine” and then forcibly carried off and imprisoned in Dublin Castle.
1607 saw the Flight of the Earls from Portnamurray, Rathmullen, thus finally bringing to an end the rule of the old Gaelic system and finally securing to the English complete domination, and left the way clear for the Plantations.

Tried by court martial and sentenced to hang

In 1798 Wolfe Tone, leader and founder of the United Irishmen, sailing from Brest aboard the Hoche accompanied by a French Fleet, encountered the British Fleet under the command of John Warren off the mouth of Lough Swilly. After fighting with great courage and bravery for six hours, Tone was compelled to surrender, then arrested and taken up the Swilly to Buncrana, onto Derry and then Dublin to be tried by court martial, and sentenced to hang. Rather than await this fate, he died from a self inflicted wound from a penknife.

Portsalon Hotel could compete with the best

Kate Barton ran the hotel very efficiently and Baptist’s wife Isabel was a keen gardener and established the famed walled garden which ensured there were always fresh cut flowers for the tables and seasonal vegetables and fruit for the hotel. Kate Barton would go to London during the winter to stay in and study how the hotels there were run and then implement these ideas in Portsalon, one of these was the printing of the hotel name on the crockery and printing postcards, to promote the hotel afar. Kate’s visits to London also gave her the chance to witness new trends and styles in hotel keeping which ensured that Portsalon Hotel could compete with the best. With Baptist being A.D.C. to King Edward V11 (1905-1910) and King George V (1910-1914), she was welcomed into the influential London society.

Rita came to Portsalon the Easter of 1919 and at that time there was only the hotel, post office and the stores on the Pier there. After the sinking of the Laurentic the salvage ship The Racer was soon in Lough Swilly with divers retrieving the gold, however a succession of stormy winters put paid to that resulting in her and her attendant destroyer The Vancouver not being able to return to Portsalon until the summer of 1921. They would both return each spring to autumn until 1924 but as we know not all gold was retrieved, but they retrieved the bell and presented it to Baptist Barton, who then passed it on to the church in Portsalon, where it still rings out. Rita said the hotel was fully extended by 1920 to accommodate 100 rooms.

The popularity and attractiveness of the hotel began to wane

The Hotel was sold to the Costello Hotel Group in 1967 and Stan and Mary Glynn became the managers. However the challenge of changing times in the late sixties robbed Portsalon of it’s distinctiveness. So many other places like it sprang up catering for a quickening increase in tourist traffic. Resorts once regarded as uniquely fashionable became a thing of the past. The popularity and attractiveness of the hotel began to wane. The Barton era was at an end in Portsalon and the hotel was never to be the success again that it was under their ownership. Then in 1971 it changed hands again when it was sold to Mr. Duffy, an accountant from Derry. The golf links were sold to Portsalon Golf Club in 1986.

The Hotel came to a sad end in the early hours of Saturday morning 3rd August 1991 when a fire reduced it to a crumbling wreck. It’s beautiful structure, now a shell was deemed to be unsafe and was demolished the following Monday.