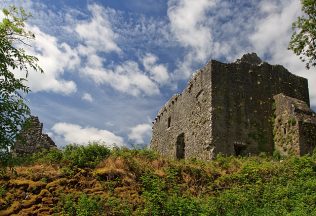 Adam Staunton was referred to as ‘a great baron of Kildare.’  (Maclysagh) Adam or his brother or son arrived in Mayo with the Burke family.  They were granted the district of Carra where he constructed a castle circa 1229.  It included a three – story tower with a strong bawn.  The Staunton’s were in position until the end of the sixteenth century.  During that time: they changed their surname. An image of this castle with the recorded family history of Staunton’s may be viewed at this site.  [i]

Carra Castle was constructed during the thirteenth century by Adam Staunton an Anglo-Norman from Warwickshire who was permitted by de Burgo to resided there.   A view of the castle features on this link. [ii]

Carra Castle or Caislean Cheara was a tower house that now is a national monument.  Situated 2.5 kilometres west of Carnacon on Lough Carra’s east bank.  Established by Adam de Stanton as a rectangular tall house.  He was an Anglo-Norman subject of de Burgo’s family during the thirteenth  century.  Additions of a plinth, bawn, outbuildings also a gateway were a later addition by Mac Evilly.  With the surrender of the castle to the crown during the 1570’s the new owner Captain William Bowen strengthened the bawn with a circular flanker with gunhooks that faced inland.  His lands were in turn seized by Sir Roebuck Lynch though he was compensated by lands at castle Carra during the seventh century.  During the 1660’s the castle passed to Sir Henry Lynch 3rd Baronet.   Lynch’s remained in possession until the nineteenth century.  Castles coordinates were 53.721389N,  9.255278W.  [iii]

This castle was built by Adam Staunton an Anglo – Norman from Warwickshire, England in the thirteenth century with the permission of De Burgo’s.  It was a two-story square tower house.   Staunton family held the seat up to the eighteenth century.  The castle was granted to Sir Henry Lynch 5th Baronet following the restoration settlement.  The mansion house with offices were described during 1844  as ‘now almost in ruins.’    Ruins now visible include a pillar,  a residence with a wall connected to it at the rear of house.  A small chamber still has an arched roof intact & at the end of the chamber is a small slit window.  The outline of an upper story window with chimney remains are also visible. [iv]

Partry House dates from 1667 when it was built on the remains of Cloonlagheen Castle by Arthur Lynch as a dowager house for his mother Lady Ellis, (the widow of Sir Roebuck Lynch of Castle Carra)  By the first half of the seventeenth century Sir Roebuck Lynch’s lands were seized by the Cromwellian army.  He was compensated by lands at Castle Carra.  It was named after Cloonlagheen or ‘the meadow of the little lake’  as the townland on which it stood was known.  Evidence of the original castle was discovered during 1995 when restorative work revealed slit windows that opened inward at knee level on the first floor.  The old castle walls had been incorporated into the stable walls.  Knox’s History of Mayo  1910 stated that Cloonlagheen Castle was owned by Abbé MacEvile of Ballintubber Abbey. [v]

Carra Castle was constructed on a rocky perch above Lough Carra by the de Staunton Family.  Additional improvements by his descendants MacEvilly’s included a battered plinth also a small polygonal bawn to surround the castle.  A large outbuilding with gateways were added.  The Castle was surrendered to the Crown then granted to Captain William Bowan who strengthened the bawn with gunloops at the north-east corner.  The castle passed to Sir Henry Lynch during 1660’s.  It remained in that family’s hands until the nineteenth century.  Castle ruins image feature on this site by Mike Searle. [vi]

Philip son of Sir Bernard Staunton was awarded the district of Carra when he arrived at County Mayo.  He constructed  a castle & a town house in approximately 1229.  Carra Castle consisted of a three-story tower inside a strong bawn.  The Staunton family resided there until the sixteenth century.  They reconstructed an O’Flaherty castle Kilboynell also called Kilvoynell or Lilfeynell near to Carra Castle.  They possessed two other castles at Kilkerren & Cloynloghen. [vii]

Carra Castle is referenced among the castles as a thirteenth century building on this site.  It was a rectangular great tower also a hall-house owned by de Staunton & Mc Evilly. [viii]

Partry House is an historic building that was constructed during 1667 on the site of an old castle. [ix]

The castle was a thirteenth century great tower on the shores of Lough Carra. This link features a beautiful image of the ruins.  [x]

Mayo castles listed in alphabetical order may be viewed at this link: https://www.geni.com/projects/Historic-Buildings-of-County-Mayo/29699

Castles in Co. Mayo are listed on this site: https://en.wikipedia.org/wiki/List_of_castles_in_Ireland#County_Mayo

Images of several castles by Mike Searles may be viewed at his site; https://www.geograph.org.uk/