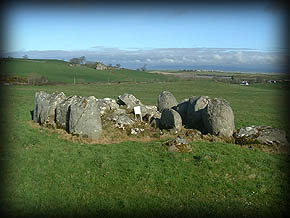 This large, destroyed wedge tomb is marked as a ‘Cromlech’  on both the ordnance survey & historic maps.  Rathfranpark Tomb is located on a level platform south east of Cearthru Mhor that overlooks Rathfran Bay to the east & north town of Cill Ala.  Tomb is orientated north-east south-west.  The entire structure is sited in a shallow depression.  It consisted of two rows of boulders-like stones that were ten metres in length & had a height of 1.7 metres.  Inside those rows were smaller orthostates that formed a double walling.  Interior of the gallery was filled with cairn material.  No sign of roof-stones exist.  A photo of the wedge tomb by Pip Powell dated 2009 is featured on this page.  [i]

This tomb with remains of a gallery is aligned east-west with outer walling on north & south sides.  Constructed with large stones that were set about one metre from the sides of the gallery.  The monument was about 3.5 metres in width at the west end also four metres in length.  It was slightly narrower at the east end.  Burial gallery now has been hidden by rubble, but it had been at least three metres in length & two metres in width.  The west end entrance had two low jamb-like stones.  Two stones of the north side of gallery remain, one of which is a split boulder with its flat face turned Inwards.  The south side of the gallery had three stones less than one metres in height.  The north outer wall has four stones set close together, they range from 1.3 metres to 1.6 metres in height.  The fours stones at the south outer wall range from 1.65 metres to two metres in eight.  Map reference is G 184333 (1184, 3333 )  Images may be viewed on this site by Brian T. Mc Elherron. [ii]

This wedge tomb is located on a minor road off the R314 north of Killala in north Mayo.  On the ordnance survey map it is marked as G184333.  Gallery is ten feet in length with side walls of boulders that are between four & a half feet to six & a half feet in height.  On this site is a comment from a horrified visitor who discovered that the debris on the tomb’s east side were dumped from a destroyed stone circle after 1951.  This site features an image of the wedge tomb. [iii]

North of Killala in Mayo are the remains of a Neolithic or Bronze Age monument.  Rathfranpark wedge tomb had a gallery over ten feet in length.  Its walls were composed from large boulders that were believed to have been four & a half to six & a half feet in height.  Several stones from a nearby destroyed stone circle were deposited at the east side of the monument.  Images with a map of area are featured on this site. (Jeffrep 9th August 2009)  [iv]

A photo of Anthony Weir beside the Rathfranpark wedge tomb during 1979 features on this link.  This tomb is marked as G 183332 sheet 23 with its nearest village Killala in Co. Mayo. [vi]

Rathfranpark wedge tomb or its Irish name Tuama Dinge Pháirc Ráth Bhrannaibh had a gallery three metres in length also two metres in width.  The monument was constructed during the copper or Bronze Age circa 2500 BC-2000 BC.  Large boulders were used in its construction that were up to 1.8 metres in height.  The axis was east north east-west south west with the former aligned to the rising sun at the summer solstice.  It had an elevation of twenty=six metres.  Coordinates are 54. 24 008 N, 9. 25 25 68 W. [vii]

Borllase William Copland The Dolmans of Ireland  vol 1 references the tomb: It may be viewed on this link: https://archive.org/details/dolmensofireland01borl/page/114/mode/2up?view=the & Hall London, pages 114 / 115.ater