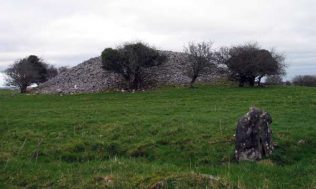 The national monument of Eochy’s Cairn stands on a long hill near Kilmaine in Co. Mayo.  The remains of two avenues may be seen to the northwest & southwest.  It appeared that once a great avenue swept up to the cairn.  From the cairn there is a three hundred & sixty degree view of the surrounding countryside.  It was named after Eochaidh the King of the Fir Bolg who had marched west for battle with the Tuatha Dé Dannan.  On his demise he was buried within the monument. (15th September 2020) [i]

Eochy’s Cairn is a large quarried circular limestone cairn located on a low hill.  It is fifty-five metres above sea-level.  The cairn is forty-five metres in diameter.  It has sloping sides with a flat platform atop.  A large quantity of stone was removed from the east side.  An interesting feature of the cairn is the enormous oval enclosure that is one hundred & forty five metres in diameter.  It runs north to south & is more intact on its West side.  Set in the enclosure’s Interior are a few small standing stones.  It is believed to have been the burial site of the King of the Fir Bolg who was killed by the Tuatha Dé Dannan. (From Fr. O ‘Flanagan History Centre, Cliffony Co. Sligo)  [ii]

Sir William Wilde stated in Antiquities  that the local name for Eochy’s Cairn was Killower.  It was the largest cairn in Co. Mayo.  Erected over the grave of the Fir Bolg King Eochy. The site is approximately three & a-half miles from Cong also to the north east of Loch Mask House.  The cairn was erected with loose stones & boulders.  The base of the cairn was surrounded by an earthen rampart of an enormous girth.  They were formidable circles of large flagstones within the interior.  The rampart was damaged, but three flagstones are still erect. [iii]

Eochy’s Cairn is situated in the townland of Carn or An Carn in the civil parish of Ballinchall  in the barony of Kilmaine in south Mayo: https://www.logainm.ie/en/114204

This national monument of Eochy’s Cairn is situated three kilometres northwest of The Neale in Co. Mayo.  It was possibly constructed circa 4000-2500 BC.  The elevation is sixty-four metres.  It is believed to be the burial site of Eochaidh Mac Eire following his demise at the mythical Battle of Moytura. [vi]

Eochy’s Cairn is listed among monuments at this site.  Monument number is 246. [vii]

This link has information on the historical legend of Eochaidh King of the Fir Bolg & a sketch of Eochy’s Cairn: http://www.carrowkeel.com/sites/cong/cong3.html

This site references the Battle of Moytura: http://www.carrowkeel.com/files/who.html

Padraig Colum on Moytura is available to download on this page: https://ricevivucu.silentsoundsparty.com/moytura-book-15662ua.php

This site features a map of area: https://www.townlands.ie/mayo/costello/kilbeagh/sonnagh/carn/