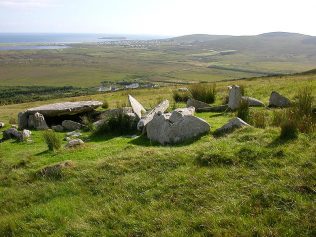 Ireland’s megalithic monuments included court tombs, portal tombs, passage tombs,  standing stones also stone circles.   Wedge tombs dated from the Bronze Age.  These were constructed to commemorate the deceased notables of the communities.  The last megalithic monuments may have been constructed after 2.000 B C.  Portal tombs were numerous with possibly one hundred & eighty identified within the country.  An early medieval manuscript Dindsences  survives from the 10th / 11th centuries states sacred geography for the pre -Christian sites in Ireland.  All the places listed in these stories are connected to the old gods. Ireland’s monuments were first mentioned by Giraldus Cambrensies during 1185 in his Topograhia Hibernica.  George Petrie with John O’ Donovan & Eugune O ‘Curry undertook  Ordnance Survey Letters from 1833-1844 of Ireland’s monuments with their folklore. Thackeray’s Irish Sketch Book of 1842  stated that Ireland was ‘far more strange to most travelers from France or Germany can be.’   A state sponsored survey was undertaken of megalithic monuments during 1949.  Court tombs consisted of a long stone cairn with semi – circular arms of a ‘court. ’  It was wide at one end. Several may have had two forecourts at opposite ends whilst each court led to its burial chamber.  The entrance to the tomb ran west to east.  The opening of the burial chamber faced east.  Portal tombs chambers had taller uprights at one end, with a capstone usually sloped backwards that rested on a lower backstone.  Those monuments weighted from twenty to one hundred tons.  Wedge tombs had a lower burial chamber that narrowed towards the closed end.  They were often constructed on sloped ground.  Several Wedge Tombs had an antechamber that was closed off from the main chamber by a ‘septal’ blocking tone. [i]

Wedge tombs were erected on hilly ground.  They faced westerly or south westerly towards the sunset.  Construction of side walls of upright stones were arranged in order to support the large roof slabs with one near end left open.  Several had a connecting antechamber.  The main structure would have been originally covered by a cairn. [ii]

Remains of megalithic monuments on Achill Island suggest that they may date from the third or fourth  centuries. [iii]

Dookinelly (F655069 ) Court Tomb is located at Doogo. (W F652072 )  It is faced up the mountain side.  All that now remains is one portal stone two metres in height with its accompanying side-stone lightly set outside the line of the portal tomb.  Another slab rests against them that may have been either a portal or side stone (? )  On the way to Slievemore megalithic monuments south of the R319 also 7.5km east-south-east of the portal tombs, 12.5 kilometres west by north of Drumcollagh is an overgrown crannog in Laoughannascaddy. (F673053 )   Discovered were indications of a submerged causeway or stepping-stones.   Keel (F646074 ) is located on the slope of Slievemore east of the Deserted Village.   It has a full court-tomb over six  metres in height by five metres in width.  This leads through well marked jambs into a gallery with two or three chambers.  The straight-sided cairn is nearly twenty metres in length also ten metres in width. [iv]

Keel West Court Tomb is marked as ‘cromlech’ on both historic & ordnance survey maps. Located on the south steep slope of An Sliabh Mor  it overlooks Keel Lough to the south on the north side of Achill.  Keel Court Tomb has an open court of four metres across that leads to a gallery of 2.5 metres in length & two  metres in width.  The chamber itself measures 2.7 metres in length also 1.8 metres in width.  It is 0. 25 metres is depth.  The orthostats on the galleries east side have fallen inside.  The cairn that measures 7.5 metres in length has slipped down the mountainside on the south.   Coordinates are 53 59 59 975 N, 1033751 W. [v]

Four hundred metres north east of this tomb (F649076 ) is a full court tomb at an aligned north-south.  It has a much narrower court with entrance through a narrow passage between transverse orthostats.  An enormous cap-stone is now at the back of its gallery.  Corbelling may be viewed on its west side.  South end of the cairn is buried within a bog. [vi]

Slievemore (F594097 ) on Achill Island has several prehistoric monuments.  An almost complete wedge tomb is largely covered over.  An arrangement of stones possibly may be remains of a tomb-gallery.  A fine dry-stone clochán or stone hut stands nearby.  Three hundred metres south west are three stones that form an Arc: possibly a stone circle (? )  4.8 kilometres west of the court-tomb  (F602076) a few metres east of Annagh Strand is a roof less portal tomb.  Two uprights survive, possibly a portal stone two metres in height with a door stone.  Two large slabs are located within the chamber: one of which is displaced: perhaps a roof stone (? )  Three hundred kilometres south west are three stones that form an arc: these may have been a stone-circle.  Just further west of the Deserted Village is a heavily-quarried quartz outcrop that originally must have been very impressive. [vii]

Slievemore on Achill Island is rich in archaeological monuments that spanned  a five thousand year history from Neolithic to post Medieval. [viii]

An image of a megalithic tomb on Achill Island may be viewed at this link: https://www.flickr.com/photos/irishfireside/2501880210/

One may view this publicationThe Pagan Religious of the Ancient British Isles at this site: https://www.amazon.com/Pagan-Religions-Ancient-British-Isles/dp/0631189467

Publications that refer also to topic include the following:

This link may be of interest: https://www.knowth.com/books_recent.htm

This PDF may be of Interest: https://www.archaeology.ie/sites/default/files/media/publications/smi-vol-5-text.pdf