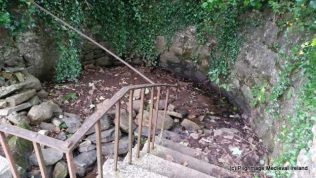 The development of a seventh century monastery founded by St. Cronán in Balla, Co. Mayo was chosen by him as he was guided by a cloud  that he understood to be a sign: on the chosen site a spring burst from the ground.  The holy well was once dedicated to St. Cronán or Mo Chúa.  Rededicated during the seventeenth century to the Blessed Virgin.  All that now remains of the monastery complex is a round tower inside an historic graveyard.  The site of the actual spring survives: it is located to the west of the graveyard along a path that runs along the side of graveyard then from there onto the community centre carpark. Holy well is known as Tobair Mhuire.  Close to the well a bath house was constructed for lame or blind pilgrims during the seventeenth century.  Stations were performed on patten days.  It was noted that ‘is attended by great numbers of the peasantry at patens held on 15th August and 8th September.’  (Ordinance Survey Letters of Mayo 1838) [i]

St Cronán Mochua journeyed to Connaught during the year 616.  Founder of the see of Balla in Co. Mayo. (It later merged with the See of Tuam)  He founded the first church & abbey at Balla where he was elected the first – archbishop. It flourished during the period of 596-637 A D.  St. Cronán’ s acts were more or less of a legendary character.  Numerous miracles are recorded to St. Cronán Mochua that are minutely documented in his Irish Life. [ii]

Schools Manuscripts Essay for Balla states ‘there are two little pillars, of mason work, called by the people ‘Station Monuments (leachta) and used as such, on top of which are two small stone crosses, one on each, and in which they are fixed (in the work of which are placed) two stones, one in each, with inscription on them, dated 1733: both are made up in English, and under one of them are the words ‘sun luum praesidium fugimus santa Dei genitrix’ (under your protection, we fly, Holy Mother of God)  ‘Sight has been restored to some people who performed the stations.  Several Our Father’s and Hail Mary’s were to be repeated at each heap of stones and at the wall’ – are two heaps of stones with a cross on each side lying down.  Beneath these two heaps of stones two priests are supposed to be buried.  St. Cronán himself is said to be buried near the spot.’   Also recorded was the belief that sight had been restored ‘to affect a cure’ as some people performed the stations.  Several Our Fathers and Hail Mary’s were to be repeated at each heap of stones and also at the well. ‘ (roll B no. 1146 page 178)  See https://www.duchas.ie/en/cbes/4427833  [iii]

Schools Manuscripts Essay also recounted a version of the long station. ‘The rounds are done by the people on their knees from a particular slab to the altar on the opposite side of the graveyard saying while doing seven Our Father’s, Seven Hail Mary’s and seven Gloria.  Then the people walk around the graveyard seven times and repeat the same prayer.  When the people reach the graveyard gate, they go on their knees to the altar again and they go down to the Blessed Well and take off their shoes and stockings and walk around the wall three times and then  drink the water.  After that they make the sign of the cross on a stone nearby so that the station would be blessed.’  (Balla C roll no. 1146 pages 34–35) See https://www.duchas.ie/en/cbes/4427833 [iv]

St. Cronán’s Pilgrimage Well & rest house: local tradition is that a spring appeared when St. Cronán visited the area.  Holy Well is known locally as Tobair Mhuire (Lady’s Well)  & is situated behind the round tower.  A seventeenth century rest house ruin is believed to have been where pilgrims rested.  Originally the well was celebrated as St. Cronán’s but it later became associated with Our Lady.  A festival or patten was held on the 15th August.  Irish tourist survey 1945 stated that St. Cronán built an abbey on the site.  It was a place of learning until the 1236 assault by Richard De Burgo. (Dympna Joyce) [v]

According to historian Brian Hoban the broken round tower with medieval altar marks the site of St. Mochua’s monastery founded in the seventh century which was one of the most important monasteries in Connaught.  He constructed a wall around the church.  As a holy man he performed several miracles.  He was widely venerated by the local people. [vi]

Green Charles An Irish Pattern at Balla Co. Mayo  Green himself described the churchyard scene (page 78) & The Long Station engraved by Eugène Froment these may be viewed in The Graphic 11  23 January 1875 (pages 96-97) [ix]

Publications that refer to topic include:

Lalor B. The Irish Round Tower  1999 (Collins Press): https://roundtowers.org/references.htm

This link provides a map of holy well sites: https://sacredsites.com/europe/ireland/index.html

Images of Ireland’s Holy Wells are available at this site: http://megalithomania.com/show/site/1069/keel_east_holy_well.htm

In The Connacht Telegraph  8th September 2020 an article by Tom Gillespie reported that Balla Holy Well has been cleaned-up also the adjoining rest house has been reconstructed by Pat Conlon from Ballyclogher. (page 20)   Images of the well, rest house with Latin inscription was erected on the rest house wall. (NBC)

An article by Tom Gillespie on  Balla Holy Well Project was reported in the 13th October 2020 issue of The Connaught Telegraph.  An aerial image by Michael Durcan may be viewed on page 17. (NBC)