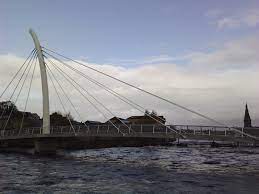 Two stone bridges span the river Moy.  The Moy is navigable from the sea approximately six miles distant.  The grand jury of the County Mayo had presented three thousand pounds towards the erection of a handsome bridge on the site of the present old narrow one. [i]

This lower bridge over the Moy represented an important component of the early nineteenth century civil engineering heritage of Ballina with the architectural value of the composition the elegant ‘sweep’ of the arches.  The bridge was constructed of rough – cut stonework offset by red brick dressings that produced a mild polychromatic palette, with a visual statement at a crossing over the river Moy.  It was erected by ‘Messrs. Armstrong and West…altogether unassisted by public money or presentments’  (Ballina Impartial 19th August 1833)  A series of four elliptical arches included repointed red brick voussoirs erected during 1833-1835. Also repointed snecked limestone walls centred on drag edged tooled limestone ashlar triangular cutwaters to piers with cut-limestone stringcourses to support parapets that had cut-limestone coping.  The bridge was extant during 1838.  A benchmark remains of additional interest for the connections with cartography and the preparation of maps by the Ordnance Survey (established 1824)  Several images feature on this page including a date plaque.  Registered number is 31204105.  Coordinates are 124866, 318989.  (date recorded 10th December 2018) [ii]

This Ballina lower bridge was erected between 1833-1835 possibly by William West.  It spanned across the river Moy.  The cost was an estimated at one thousand, two hundred pounds.  It was a four elliptical arched bridge with repointed red brick voussoirs.  The red bricks with rough-cut limestone worked to produce a mild polychromatic palette. [iii]

The Armstrong & West or lower bridge over the river Moy was constructed during 1835 with four arches according: https://mayo.me/2016/03/18/salmon-weir-bridge-ballina/

The upper bridge included a series of five segmental arches with drag edged rusticated limestone ashlar voussoirs that spanned river Moy also with sheer limestone dressings.  Designed during 1834 (? ) then constructed during 1835-1836 by Thomas Ham CE (d. 1841)  This upper bridge represented an important component of the early nineteenth century civil engineering heritage of Ballina with the architectural value of the composition by the elegant ‘sweep’ of the arches also the ‘sparrow pecked’ surface finish offset that produced a pleasant visual statement at a river crossing.  Erected also with repointed tooled limestone ashlar walls centred on rounded cutwaters to piers that had domed capping with cut-limestone stringcourses to support the parapets of cut-limestone coping centred on cast-iron date stone of ‘1836’  in cut-limestone frame.  According to Lewis Samuel (1837 1.104) it was ‘defrayed by subscription [and] the Earl of Arran…in compliment to whom it will be called Arran Bridge.’  The bridge was extant in 1838.  A benchmark remains of additional interest for the connections with cartography also the preparation of maps by the ordnance survey (established 1824)  Several images feature on page.  Registered number is 31204104.  Coordinates are 124646, 318761.  (date recorded 10th December 2018) [iv]

Ballina upper bridge was constructed in 1835-1856 by Thomas Ham at a cost of three thousand pounds.  A five arched bridge spanned the river Moy.  The ‘sweep’ of the arches with the ‘sparrow pecked’  surface finish was offset by sheer limestone dressings that provided an elegant structure. [v]

The Hamm or upper bridge  was constructed during 1836 by Thomas Hamm at a cost of three thousand pounds with five arches: https://mayo.me/2016/03/18/salmon-weir-bridge-ballina/

The project of Ballina Urban Council detailed the following on this link re the new bridge that the  construction of a sixty-seven metres in length long, two span, post tension cable stayed footbridge was proposed to be erected over the river Moy in Ballina at the cost of €1.43m. Requirements included design with construction of a pier foundation in the river Moy. Construction of a reinforced concrete pier with two reinforced concrete abutments plus a hollow steel pylon with concrete filling in the river Moy.  Also manufactured with erection of a pre – cast concrete bridge deck with stay cables from the deck to the pylon.  The construction of bridge parapets with approach stairs also ramp to the south abutment included parapets & railings.  Further works included surfacing to bridge deck & approaches also installation of elastomeric (type 5) expansion joint system.  A rock platform was constructed in the river for the 300T crane that was used to lift the temporary works into position.  The operation involved the placement of a rock formation approximately twenty-two metres from one bank to forty-five metres from the other in the riverbed also received temporary support.  These spans were then decked with a prefabricated platform in order to allow access to the works.  The platform was then spanned with welded double 914 mm RSJ’s.  All works were undertaken adjacent to a listed structure-fish pass & weir. [vi]

This imposing structure (designed in the shape of a fishing rod) was opened during July 2009. The pedestrian bridge spans the Ridgepool at the Salmon Weir.  History with modernity together produced this.  The sixty-seven metres in length two-span post tension cable-stayed bridge is one of three bridges that span the river Moy in Ballina.  The two others are downstream of the Salmon Weir bridge. [vii]

Historian  Reilly Terry’s blog titled Bridge Over Troubled Waters  detailed the following information that Ballina’s new bridge t was opened during 2009 & is a wonderful pedestrian structure that crosses the river Moy just above the Salmon Weir also the world-famous ridge pool in Ballina. It links the town of Ballina with ancient Ardnaree.  It is the only bridge constructed under the Irish jurisdiction as the other two: The Ham (1836) also The Arran Bridge (1835) were constructed under British rule.  The pedestrian bridge  was appropriately designed to resemble a fishing rod initially had both detractors & supporters.  Debates occurred re the positioning of the structure; the role it fulfilled as a pedestrian route with the cost at less than two million euro.  Even several Urban Town Council Members were divided on the issue. [viii]

This article by Colm Gannon on the cost of maintenance to bridge February 2021 may be viewed at this link: https://www.advertiser.ie/mayo/article/119975/100000-to-repair-pedestrian-bridge-over-the-moy-in-ballina

A negative image of the river Moy from the lower bridge of Ballina is documented at the National Library of Ireland’s valentine photographic collection may be viewed at this site:  http://catalogue.nli.ie/Record/vtls000567685

The river Moy has two stone bridges crossing it according to Samuel Lewis’s at this link: https://www.libraryireland.com/topog/B/Ballina-Tyrawley-Mayo.php

An image of the Salmon Weir bridge by Garath James 2019 may be viewed at this site: https://www.geograph.ie/photo/6124874