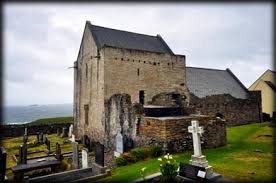 Clare Island is situated in Clew Bay.  A ridge runs east to west: it reaches a height of four hundred & sixty-five metres at Croughmore or Knockmore Mountain.  The Island comprises four, thousand & fifty-three acres.  It is circa six km from the mainland Harbour at Roonagh & thirty kilometres from Westport.  It is believed that habitation existed on the Island from 3,500 BC. Prior to Ireland’s great famine the population reached one thousand & seven hundred residents.  Possibly just one hundred & fifty inhabit the island in this century. [i]

The island is approximately three miles from the mainland.  It covers an area of one thousand & six hundred hectares.  It is an entirely cliff-bordered Island.  Most of the cultivated lands lie towards the eastern end.  Croaghmore Mountain is situated on the western side.  The island displays five major rock groupings with several minor intrusions.  [ii]

During 1909 / 1911 a survey was carried out by the Royal Irish Academy under the direction of Robert Lloyd Praeger.  A further survey was carried out this century by the R I A who explained that ‘In this period of environmental change, there is a critical need for baseline surveys in unpolluted environments against which future changes can be measured….In many ways, this beautiful island is a microcosm of all that is the West of Ireland: unpolluted yet sensitive to fundamental global changes.’  The first volume concerned the history & cultural landscape, the second concentrated on the Island’s geology whilst the third was of the marine intertidal ecology.  It is proposed that future surveys will concern the island’s flora, fauna also bird life.   [iii]

Clare Island Survey of 1909 was the first geological survey of a special area in the world by engineer Robert Lloyd Praeger (1865-1953)  The funding was provided by the Royal Irish Academy at a cost of £1,000 during 1915.  Several frescos were discovered by antiquarian Thomas Westropp during the original survey.  A century later the RIA returned to the island to undertake a further survey.  To date twenty-six individual studies on a range of subjects have been completed.  An examination of the island’s folklife, an essay on the importance of the Congested District Board of 1895 also an analysis of place names were included.  According to this article there was to be a launch of volume 2 of The New Survey of Clare Island: Geology by Mary Robinson in Westport.  It was proposed that a new survey be undertaken that would focus on botany, zoology with Archaeological aspects.  Praeger recalled his island experiences in his In The Way That I Went  1937.  According to John Graham ‘Prior to the Mesozoic Tertiary opening of the Atlantic this area would have been adjacent to the Grand Banks of Newfoundland as part of the major Appalachian / Caledonian Fold belt extending from Northern Norway & Greenland through to South-Eastern U.S.’  The eighteenth century traveller Rev. Richard Pococke once mused on that bank that ‘It is supposed that it is part of that bank that extends to Newfoundland.’   [iv]

Court tombs were one of four main types of megalithic tombs in Ireland that dated possibly from the Neolithic settlements.  Excavations suggested they were collective burial sites with remains accompanied by pottery vessels, simple ornaments also stone implements.  Those court tombs were also community focal points for an assembly to pass laws, play games or enact rituals according to the seasons. The existence of the megalithic tomb was identified by Dr. Peter Gill of the Centre for Island Studies of Clare Island.  It was surveyed by Paul Walsh Megalithic Survey of Ireland during 1993 (fig. 18) then was confirmed by archaeologist Paul Gosling during 1989.  That study dated it to mid third Millennium BC.  It confirmed definite Neolithic activity on the island.  The monument occupied a saddle between two hillocks amidst the stark hummocky moraine topography to the east of Glan Hill Knockaveen on the Ordnance Survey map.  Immediately to the east of the tomb is a small peat basin known locally as ‘Poirtin Fuinch.’  The island’s Court Tomb was a type that comprised one long & slightly wedge-shaped chamber with a length of 5.6 cm with a two metres max aligned east north east-west south west.  Just four set slabs survive of the court amid a mass of loose stones on the eastern side.  Possibly the tomb was contained within a large cairn that survives as a low oval cairn approximately 19.25 metres in length by 12.3 metres in width.  Several massive corbel slabs are visible along the south south east side of the chamber.  None of the capstones appear to have survived. [v]