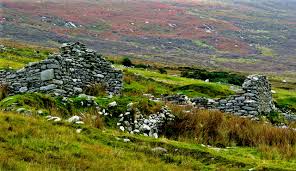 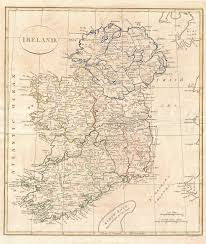 On Achill Island, north of Keel, south-east of Dugort, the remains of a village along an ancient track are a poignant reminder of a horrific episode in Ireland’s history: when human nature’s greed permitted wholesale eviction of Irish citizens thrown out of their dwellings by landlordism so as to have the homes levelled or let to cattle graze: as was the case of this deserted village.

Slievemore’s Deserted Village on Achill Island according to archaeologist Dr. Theresa McDonald, founder of the Achill archaeological field school dated from the early Medieval period (500-1200 ) with its final abandonment during the mid-1800’s ‘The first emigration of villagers occurred in 1848 during the Famine, and inhabitants of the two remaining sections departed to nearby areas . . . between 1850 and 1852.’   [i]

The houses were constructed of unmortared stone i.e. no cement or mortar was used to hold the stones together.  Each house consisted of just one room: this room was used as kitchen, living room, bedroom or even a stable.  The doorways were east facing.  Houses may have had a small stable build adjoining the home.  Several families shared their house with livestock they would be brought inside at night or tied at the southern end.  The tethering rings can still be seen in the walls.  Several of the houses had opposing doorways to facilitate families on their daily task of milking cows.  The cow was taken in one door, milked then taken out through the opposing door.  [ii]

They were one-roomed structures built in the same fashion as the field boundary walls, constructed by stacking or slotting large stones of various sizes in place. [iii]

The 1838 Ordinance Survey of Slievemore on Achill Island showed that it was occupied with one hundred and thirty-seven recorded residents.  Over ninety per cent  of the houses were aligned north-south, at right angles to the street. [iv]

Today this village is a major tourist attraction.  Though one may leave it with lingering sobering thoughts of its previous inhabitants.

An archaeological field trip is held annually at this village area. [v]

A National Geographic  copy of an image from the deserted village by Ciaran D’Arcy may be viewed at this site:  [vi]

John Mc Namara features several images of the ruins on this site.  [vii]

Australian library features The Deserted Village at Slievemore-a study  on this site. [viii]

This PDF of Kingston’s study may be viewed at this link. [ix]

Images by Breda O ‘Malley & Danny Moran of Slievemore’s Deserted Village may be viewed at the following link: [x]