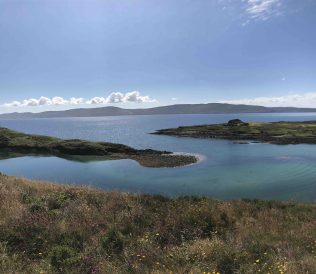 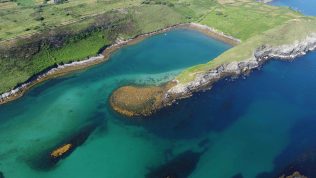 Lonehort Harbour is on the eastern end of Bere Island. The place name Lonehort / Longphort is of Norse origin meaning a fortified ship harbour. In 1985 a joint archaeological project between the Department of Archaeology at University College Cork and an underwater survey unit from the Institute of Irish Studies at Queens University Belfast examined Lonehort and its Viking connections.

An artificial breakwater is positioned at the entrance to the harbour and was formed by dumping a large amount of stones on the seabed. Archaeologists also found evidence of a Naust on the shoreline. Nausts are of Scandinavian origin and are an artificial shelter used for the repair of boats.

Lonehort Harbour was also the landing point for Sir George Carew and his forces in June 1602 ahead of the Siege of Dunboy. The soldiers marched across the island, taking up position on the western shoreline immediately opposite O’Sullivan Beare’s stronghold at Dunboy.

In 1921, Lonehort Harbour was the scene of a daring escape by one of the internees from the Bere Island Internment Camp. Mort O’Connell, while returning from a swimming parade at a strand in Lonehort Harbour, managed to escape from his guards and was whisked away by locals in a small boat, around the southern side of the island, in order to avoid a flotilla fo British warships anchored off its northern shores. On landing on the mainland O’Connell travelled to Dublin to take part in the Treaty Negotiations.

The best views of Lonehort Harbour can be adjoined from the public road which overlooks it.