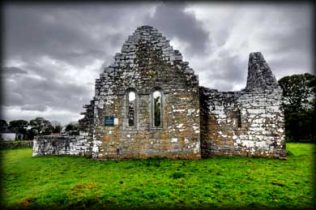 Inishmaine Abbey once sat on an island of Lough Mask.  Due to the lowering of water on construction of a canal the abbey ruins are now situated on a peninsula.  St. Cormac founded  Inishmane Abbey during the seventh century.  The present building dated from 1223 AD when the site was repurposed as a Benedictine nunnery.  Abbey was burnt down during the seventeenth century.  Remains of a thirteenth century church also a fifteenth century gatehouse are visible. (the latter would have protected the entrance to the building)  The chancel arch is incomplete but retains the fine sculpture capitals with images of foliage & imaginary beasts.  The twin east window is decorated in moulding of wild or imaginary animals.  GPS 53.59 80 – 9 30 12.  Several images feature on this site.  (Ed Hannon 15th July 2015) [i]

The early medieval abbey was founded by St. Cormac / St. Corbmac on an island during the seventh century.  Maelisa O ‘Connor, son of Turlough was awarded the title of prior of Inishmaine.  His demise was recorded at the abbey during 1223 from the Book of Ballymote. The present building dates from the early thirteenth century.  Malachy O ‘Connor was recorded as a patron of the rectory of ecclesiastical lands of Inishmaine Abbey.  It was listed as a Benedictine cell also as an Augustinian Nunnery of Arroasian nuns.  North east of the abbey are the fifteenth century gate tower ruins.  Several carvings on capitals of the chancel were in existence.  A splayed window was constructed on the later north transept.  The nave (with several ashlar blocks that may have been from an earlier structure ) is now entered through the trabeate doorway in the north wall possibly was from an earlier building.  A small aumbry may be viewed in the south wall.  Discovery map 38. M13856170.  Coordinates are longitude 9. 18 5 W, latitude 53 35 53 N.  Images by Jim Dempsey & Deb Suelson feature on this site. (April 2012) [ii]

Inishmaine Abbey was possibly five miles by road from Cong.  Circa one hundred years ago Loch Mask waters were lowered on the construction of a canal that left the Inishmaine, Inishown also Inisoog Islands connected with each other with the mainland on a peninsula. Near the water’s edge was a vaulted stone building of the outer castellated Abbey Gateway as referenced by Wilde.  Within the field behind one may view Inishmaine abbey ruins.  O ‘Donovan believed the abbey was constructed later than the Anglo-Norman invasion: perhaps during the twelfth or fourteenth centuries on the site of St. Cormac’s sixth century church.  It was constructed in the Hiberno-Romanesque style.  The nave measured forty-one inches by twenty-one inches to the chancel arch columns.  The church narrowed eastwards of the chancel at twenty inches by fifteen  inches.  Amidst the floridly decorative architecture of the building was a small square-headed doorway in the north of the nave.  That trabeated doorway with inclined jambs also massive lintel possibly may have dated to the eight century.  An early window in the north wall of the chancel may have been from Cormac’s era or a previous one also it may have been inserted for preservation.  Against each side of the chancel was a roughly square structure: possibly it may have been domestic apartments or dwellings.  The east Gothic window of the chancel comprised two narrow round-headed lights deeply splayed.  The outer mouldings both inside & outside terminated in well-carved grotesque figures that included a man on horseback also two animals with floriated tales fighting.  Clustered columns of four orders at the chancel entrance testified to the former existence of an arch.  Capitals were decorated with carved floral designs that displayed a high standard of artistic skill & conception. Abbots lived at Inishmaine Abbey during the sixteenth century.  During 1306 the building was used as a parish church.  The Annals of the Four Masters referenced Inishmaine abbey in two paragraphs within their manuscript.   InThe Life of Cormac (translated into Latin by Colgan for the Leabhair Lecan) the tale of Cormac’s initial visit to the palace or fort of the King of Connaught Owen Beul in which Cormac was not well received is narrated in the article. Cormac prophesized that in some future date the Royal Dun would be levelled then a community of the Servants of Christ would construct a monastery on the site. [iii]

Inishmaine Abbey was located southwest of Ballinrobe on the eastern shore of Lough Mask.  It had been on an island: but due to canal construction of water lowering it resulted in the formation of a peninsula.  During the seventh century St. Corbmac founded the early monastic site.  Following 1223 it was renamed.  The building was inhabited by Augustine of the Arroasian Nuns possibly from Annaghdown.  The abbey was dissolved during 1587.  It was burned during the seventh century.  The only remains are the thirteenth century church with a fifteenth century gatehouse.  Several ashlar blocks are in the Nave.  The north lintelled doorway may be from an earlier period.  The chancel arc features carved capitols.  The Gemini windows on east side are decorated with wild animal mouldings. (5th June 2020)  [iv]

National Monument of Ireland Inishmaine Abbey is numbered 302. The motherhouse was Kilcreevanty Abbey.   Mainister Inis Meaín ruins are located on the eastern shore of Lough Mask southwest of Ballinrobe.  Previously it was situated on an island but following the lowering of the Lough’s waters for canal construction it now is on a located on a peninsula.  Inishmaine  abbey was founded by St. Corbec during the seventh century: it was re-founded later than 1223.  Inhabited by the Arroasian nuns dependent on Kilcreevanty.  It was dis-established circa 1587.  During the seventeenth century it burnt down.  Remains of a thirteenth century church with a fifteenth century gate-house are onsite.  Inside the church may be viewed several ashlar blocks in the nave with a lintelled doorway on the north side, (it may be from an earlier structure)  Carved capitals feature on the chancel arch. (Stocks) The east twin windows are decorated with mouldings of wild imagery animals. Coordinates are 53.59 80 92N, 9 3013 41 W. [v]

This building was an early monastic settlement founded by St. Corbmac during the seventh century.  The abbey was inhabited by Benedictine also Augustinian Nuns.  Re – founded as a church after 1223 possibly in 1227(? )  The site was dependent on Kilcreevanty Abbey.  It was dissolved during 1587.  An image  features on this page also it is listed among abbeys in Mayo. [vi]

A black / white image from Edward Rae collection of church ruins with chancel & east windows is featured on this page: http://gothicpast.com/items/show/1519

An image of chancel arch with  window information may be viewed at this link: http://www.tara.tcd.ie/handle/2262/39227?show=full

These publications may be of interest:

St. Corbmac-The Corpus of Romanesque Sculpture in Britain and Ireland  may be viewed at this link: https://www.crsbi.ac.uk/

These publications Annals of the Four Masters alsoThe Life of Cormac are referenced on this site: https://www.mayo.ie/getattachment/edeb08c7-68a9-46d4-bfda-9985b84f6fe7/attachment.aspx