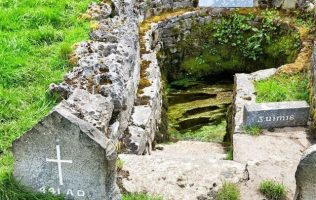 When the persecution of Catholics began following the Reformation numbers began to assemble for devotional purposes at such wells.  When Catholics were forbidden under the Penal Laws to assemble for Mass in churches, altars were erected beside these Holy Wells & mass was said there in secret whenever possible for the assembled faithful.  If no priest could be found, private devotions were carried out by a lay leader of the people.  Each Holy Well is usually found in a quiet place, sheltered by trees, & covered by a flat stone shade to preserve it from contamination.  Round the Holy Well a circle is traced & there are ‘statues’ or resting places for prayer & mediation at regular intervals along the line of the circle.  Close to the Holy Well is a crude altar beside a tree trunk on which a crucifix in wood or stone is hung on the branches of the trees in the vicinity, small pieces of cloth may be fastened to the area.  At the close of the visit the Pilgrim may drink some water from the Holy Well by a vessel secured with a chain to a nearby stone or wall.  [i]

During the nineteenth century the people of a locality visited the holy wells on feast days. They requested a cure of the particular saint then when these were granted: they decorated a nearby bush with a rag in thanksgiving.  They walked round the holy well a certain number of times as they prayed on the Patten Day.  Those days occurred usually on the last Sunday in July called Garland Sunday or on the 15th August.  Both dates corresponded with the Festival of Crom Dubh or Lunasa. (‘A Step Back In Time with James Reddiough’  October 14, 2017 a history )  [ii]

Nineteenth century devotional rituals known as the long stations engaged by people were quite complex.  Possibly up to fifteen thousand to twenty thousand people attended on the Feast Day’s eve.  Bare foot pilgrims began the rituals in the graveyard where they knelt then said a pater, ave also gloria seven times.  They crawled on their knees to the high altar at the second church as they recited one pater, fifteen aves.  At the altar they recited the litany of the Blessed Virgin & seven aves with seven glories.  They walked around the graveyard seven times as they prayed fifteen decades of the rosary.  When they returned to the altar they again recited the pater, ave & gloria five times.  At each cairn they recited five paters & aves.  They turned around three times.  At the holy well they made the sign of the cross with its waters as they prayed one ave each time.  That was the completion of their station. (Rynne 1998 page 183 )  [iii]