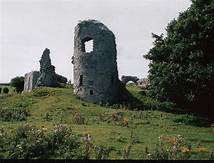 Ballylahan Castle is now a listed national monument under the care of the OPW.  Constructed  by Jordan De Exeter in 1239 on the south bank of the River Moy in Co. Mayo. The Exeter’s arrived in Ireland during the Norman invasion of 1168 with Strongbow the Earl of Pembroke.  To assume Irish patronymics: the name was changed to Mac Jordan following Jordan De Courcy’s demise during 1197.  De Exeter was later appointed Sheriff of Connaught. De Exeter constructed a friary in nearby Straide: it was reputed that a tunnel connected both  buildings.  During 1316 the King of Connaught Felim O’ Concobair attacked the castle with the result several family members were killed.  The  building fell into ruins over the next seven hundred years.  The original castle with its hexagonal shaped bawn remain in ruins. [i]

From the Mayo Historical & Archaeological Society 20th Jan 2005 by MHAS it was reported that the curtain wall of this small Norman castle constructed  by Jordan De Exeter encloses an area roughly hexagonal in shape which contains several buildings’ foundations. The wall partly dates to the early years of the thirteenth century.  Two rounded gate-bastions were built during 1260 but just one remains.  Dr. Peter Harbison’s Our Treasurers of Antiquities  2002 (Wordwell) (page 122) contains an illustration originally engraved in 1792 that showed both gate-towers still extant also a vaulted hallway. [ii]

Jordan’s of Mayo descent derived from one Jordan D‘Exeter who acquired Irish estates following the 1172 invasion.  The original source of the name is purported to have come from Knights who travelled with the Crusades: they returned with water from Jordan’s River with which they baptized their children then called them Jordan.  The Irish version of the name is McSiurtaín or Mac Suirtain.  According to Edward McLysaght the lands owned by the Jordan family were called MacSiurtain’s country.  It has been described in the Fiants  & the Composition of Connaught.  The earliest written records occurred in the Annals of Connaught  written between 1336 & 1470.  By the seventh century that family were considered a Gaelic sept with their chief named MacSurtaine alias Jordan.  Philip A. Crowe’s The Intelligent Travellers Guide to History of Ireland  references the ruins of Ballylahan Castle as the seat of the Mayo Jordan’s with  ‘These scattered ruins are those of a thirteenth century castle built by Jordan of Exeter.  It was a polygonal courtyard castle with a twin towered gatehouse of which the remains of only one gatehouse are still to be seen.’   [iii]

This ancient Ballylahan Castle was constructed near the River Moy on a grassy mound during 1939 by Jordan de Exeter whose family came from Devon in England.  The Exeter name changed to MacJordan (i.e. son of Jordan)  He participated in the Battle of Connaught: later he was appointed Sherriff of Connaught with this castle as one of his strongholds. During the last reign of his life in 1316 the King of Connaught Felim O ‘Concobair attacked the fortress.  It was destroyed then fell into ruins during the following centuries.  It was a formidable structure with two robust towers that were an addition twenty-one years after construction: one on each side of the entrance on the eastern side.  At the site of the former entrance gate just one of the large cylindrical towers remains.  The bawn was of an unusual hexagonal shape.  The western face of the remaining tower is blasted open that revels remnants of buildings within this bawn. (posted by Castlehunter)  [iv]

Ballylahan Castle was constructed during the thirteenth century by MacJordans.  The main entrance to east is flanked by two circular stones: only one remains that was built in 1260. The entrance was accessed by an irregular hexagonal bawn.  Remains of buildings are visible especially to the western walls.   Foundations of polygonal buildings were close to centre of the bawn.  The bawn has good base-batter particularly at north west corner.  A large archway in the wall was flanked by buttress on the outside.  Several images by Brian Mc Elherron feature on this site.  James Frazier referenced the castle in his A handbook for Travellers 1844 (Dublin) (page 468) [v]

Sir James Ware stated in in The Antiquities of Ireland  vol  11 sect 3 (page 59 ) that ‘The De Exonias or De Exeters submitted to be called Mac Jordans from one Jordan De Extonia the founder of the family. ’  [vi]

According to Angelo Maria Bigari an engraving within the National Library of Ireland is wrongly dated with wrong name attached.  It has people in the foreground of the castle from  Francis Grose’s Antiquities of Ireland  vol 11.  [vii]

Templemore or Straide a parish of Gallenarea includes the ruins of an ancient fortress that is about thirty feet square.  Constructed by the Jordan family according to Samuel Lewis in his work A Topographical Dictionary of Ireland: Comprising the several counties, cities: with Historical & Statistical Descriptions embellished with engravings of the arms of cities…of  the seals,  published during 1837. (S. Lewis & Company)  The book may be viewed at this link: https://books.google.ie/books?id=dDQE_stxs-AC&dq=Ballylahan+Castle&source=gbs_navlinks_s

This site features beautiful images of the castle ruins. [viii]

John O ‘Hart in his Irish Pedigree: or the Origin or Stem of the Irish Nation  provides a description of the family at this link:  https://www.libraryireland.com/Pedigrees2/jordan-de-exeter.php

This link has a map of Ballylahan Castle at Aghaward as a national monument also a former tower house: https://mapcarta.com/W464781594