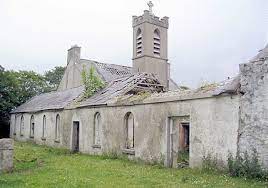 Rev. John McHale Archbishop of Tuam ordered five men on 21st September 1852 to Achill Island with the purpose to convert the islanders from the Protestant missionaries of the ‘Colony.’   The Franciscans monks were as follows: Michael O Neill, Fedelis Laurence, Joseph Tarpy, Joseph McDermot & Boneventure McDermott: they were presented with forty pounds in cash also thirty acres of barren bogland.  Without a house they relied on charitable persons who later provided a thatched cottage (named Joyce’s old house ) located near the Bunnacurry Style.  A slated house was constructed in Askill as a temporary residence & schoolhouse for education.  They sowed crops on their mountainous bog.  They constructed a sea road that provided local employment.  Two years later they left the area.  Dr. McHale visited Achill during 1855 to discover the chapel deserted & local people pleaded with him to request the monks return.  This occurred but due to strife they were advised by Parish Priest Rev. Michael Gallagher to set up a monastery in Bunnacurry.  They were gifted two small plots to till also thirty acres of bog adjoining.  Monks provided materials for the building of the monastery, chapel, a school also out-offices.  Timber was transported from Westport Bay also Galway with granite from Currane.  Br. Boneventure McDermott with several labourers’ quarried stones at Currane then sent them down to the shore where they were loaded onto Hookers: from there to a small quay at Cashel then onto Bunnacurry by cart. The foundation stone of the monastery was laid by Rev. Michael Gallagher P.P. on 12th June 1855.  Chapel’s foundation stone was laid by his Grace Most Rev. Dr. Mc Hale on 12th August 1855.  Among the benefactors were William McCormack (an Achill property owner in Dublin ) Thomas Higgins of  Tuam also the Hon. M.  Hansel of Limerick.  They were immensely productive with the erection of fences, they drained, shored, laid gravel, limed the bog to cultivate crops & worked at sea-weeding.   Monks farmed, reclaimed, cultivated their land to increase their holding to seventy-three acres.  They provided education, employment to adults & clothing to children.  One hundred & twenty years were dedicated to serve the Achill Islanders.  Brother Paul Carney entered the Monastery on 4th June 1869.  He recorded the Monastery activities (this article is a tribute to his writings .)  Brother Boneventure may be called the founder of the Achill Monastery.  He spent approximately forty-four years in Achill from 1852 to 1896.  He was superior for twenty years.  During 1872 he managed the school.  Even at age seventy-nine years of age he superintended several workmen as he worked alongside them daily until the evening when illness overtook him that resulted in his demise on 16th March 1896.  He was the first monk at morning also evening prayers: he never complained of fatigue.  He travelled to request funds to support the monastery.  He is the only brother of the original five monks buried in the  small monastery grounds graveyard.  Along with the monks: Father Pat O Connor formed a relief committee circa 1880.  Due to reorganization of the Franciscan Order departed Achill Island during 1971.  Later the land was sold to the Congested District Board.  Monastery ruins are still visible at the area. [ii]

During 1852 Dr. John McHale the Archbishop of Tuam provided land in Bunnacurry for the site of a Franciscan Monastery.  Ruins of this monastery where local children were educated may be viewed at Bunnacurry.[iii]

The Franciscan Monastery situated in Bunnacurry Village was constructed in 1852 as a centre of learning for the local community.  The Franciscan Brothers left Achill during the late 1960’s.  The building was sold to an agricultural co-operative of seven hundred & fifty shareholders.  Over the years the monastery building fell into a state of disrepair.  Comhar Chumann Forbartha Acla Teo own the thirty-five acres site around the monastery: they entered a ninety-nine-year lease with the Achill Monastery Development Company Ltd. Vincent English (one of four Achill people involved ) informed The Mayo News that they have received support from Fáilte Ireland also that the building held historical significance for the community.  The whole project was expected to cost in the region of €3.5 million with the majority of funding due to be secured through grants while €625,000 was hoped to be raised by the company.  It was envisaged that the Heritage Centre would open within two years with the monastery fully complete within ten years.  (this was not the first time that plans have been submitted to develop the monastery site)  (Anton McNulty The Mayo News 6th August 2019 ) [iv]

This article titled ‘The Franciscan Third Order Friary, at Bunnacurry, Achill’  states that this friary was opened in 1852 under the Archbishop of Tuam John McHale, who enlisted the help of the brothers in his efforts to combat the influence of the bible societies & scripture Reading societies within the area.  Friars continued their daily work, they taught in Achill for several years.  During the late 1960’s the friary closed with all dispersed to several other parts of the country.  Sections of the roof have collapsed with windows broken also their timbers rotted while there is little trace of the doors.  The once little church had a confessional situated at the rear.  A short distance from the friary is the enclosed graveyard with the last resting place of several members of the order that included the Friary founder Br. Boneventure McDermott, (whose demise occurred on 16th March 1896 ) ‘in the fiftieth year of his religious life.’   The friary property was purchased by a co – operative but now lies in ruins. Several images feature on this site of the monastery ruins, the gravestone of the friary founder, Br. Boneventure McDermott also the graveyard with plaque on the gate.  (Noel O ‘Neill 2nd August 2006 ) [v]

During 1852 Dr John McHale Archbishop of Tuam donated land in Bunnacurry for the construction of  a Franciscan Monastery to educate local children.  Ruins of this monastery are still in situ at Bunnacurry. [vi]

An article in The Connaught Telegraph  discussed the proposed new project by Achill Heritage Centre’s plan for refurbishment of the Achill Monastery site.  It stated that the monastery was constructed during the mid-1800’s.  The last monks departed from the area during the late 1970’s.  Initially the monk’s garden & a wooded area will be first project undertaken. [vii]

During 1852 the Archbishop of Tuam Dr. John McHale purchased land in Bunnacurry that was to become the location for a Franciscan Monastery for the provision of an educational facility for local children.  The building of the monastery was marked by a conflict between the followers of the Achill Mission Colony with those building the monastery.  The dispute was known in the Island folklore as ‘the Battle of the Stones.’   Brother Paul Carney was a notable monk who lived at the monastery for approximately thirty years.  He penned a biography of James Lynchehaun who rose to fame following his conviction for the 1894 attack on the Valley House in North Achill.  Brother Paul also penned accounts of his lengthy church fundraising trips across the U. S. at the beginning of the twentieth century.  Ruins of this monastery are still in situ at Bunnacurry. [viii]

The Your Ireland Summer 2021  (Publication by Celtic Media) features an article of the proposals to enable the Achill Island Monastery site to become a living historic museum.  An image from the Lawrence Collection may be viewed also several modern images of the monastery site. (page 24 ) [ix]

The Franciscan Monastery in Bunacurry was founded during 1852 as part of a strong response from the Catholic Church to Rev. Edward Nangle who set up a Protestant mission known locally as ‘The Colony’  in Achill according to this Facebook page of 29th October 2018: https://www.facebook.com/historicachill/videos/the-franciscan-monastery-in-bunacurry-was-founded-in-1852-and-would-have-been-pa/751767395180338/

Bunnacurry Monastery ruins are located along the main road through Achill  Island.  A Franciscan monk: Brother Paul Carney was based for a quarter of a century there.  His hand-written Lynchehaun narrative was the basis for Carney James’s book The Playboy & the Yellow Lady  according to a blog by Patricia Byrne on 20th February 2011: https://patriciabyrnewrites.com/tag/bunnacurry-monastery/

The Archbishop of Tuam John Mac Hale was staunchly opposed to the proselytizing activities of Rev. Nangle.  During an official visit to Achill in 1854 he established a catholic school.  A monastery was constructed at Bunnacurry administered by the Franciscan Order: http://83.96.156.163/reading-room/history-heritage/big-houses-of-ireland/image-audio-and-video-pil/religion/

Among publications that reference the Achill Franciscan Monastery are:

Byrne Patricia 2009 Teller of Tales: An Insight into the Life and Times of Brother Paul Carney (1844–1928), Travelling Quester and Chronicler of the Life of James Lynchehaun, nineteenth-century Achill Criminal  in Journal of the Galway Archaeological and Historical Society  vol 61 (pages 156-169 )  [x]

This image by Robert French from the Lawrence Collection may be viewed at the National Library of Ireland: http://catalogue.nli.ie/Record/vtls000251143