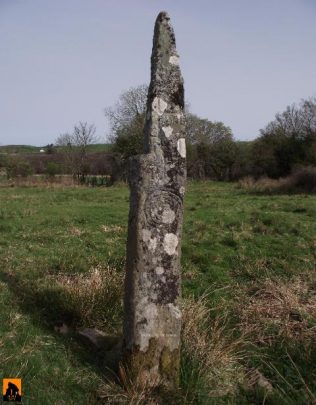 An iconic Cross Stone is located on Tochar Phadraig or ‘The Pilgrim’s Walk‘  northeast of Toberbrendan also south of Cathair na Mart was an early monastic site within County Mayo.  Lankill Standing Stone was marked on the ordnance map as ‘cross pillar’  also ‘standing stone.’  This stone was composed of shale, it leans towards the south.  It measures 2.5 metres in height, 0.20 metres in depth also 1.03 metres in width.  An inscription of a double circle is on the upper portion of both the east & west faces with a motif of four concentric circles.  A section of the bottom of this stone is missing. [i]

Lankill Cross Pillar was a slender spike of sedimentary rock with jagged margins.  The name Lankill comes from the Irish ‘Lainn Cille‘ i.e. ‘Land of the Church’.  This standing stone was possibly a ritual or a boundary marker but later when Christianized:  crosses were carved on both sides.  This standing stone is 2.34 metres in height, thirty centimetres in width at its base but just three centimetres at the top. The base has a thickness of twenty – one centimetres. The stone leans by 14° to the northeast.  Two decorations were inscribed on the southwest face: the upper part is partly missing due to the stone splitting while the remaining part includes two concentric circles with a cross at its centre.  The outer circle has a diameter of thirty – four centimetres.  The lower one has five concentric circles with an outer diameter of 23.5 centimetres.  From the outer circle some radial lines depart (like sun rays) to reach the upper decoration.  Several images by Antonia D’Imperio feature on this site.  Grid reference is M 00955 79237.  Coordinates are 53 45 512 N, 009 30 06.66 W. [ii]

Lankhill Standing Stone is a National Monument located in a field 2.7 kilometres west-southwest of Aughogower also south of Knappaghbeg lough within County Mayo.  This is a spike of shale 2.5 metres in height.  On its west face is a cross with a V-shaped ornament under it while on the east face are four concentric circles with a cross also a double circle.  Believed to have dated from the Bronze Age but was Christianized years later.  The name Lankill itself is translated into Irish as ‘Lainn Cille‘.  According to Joyce in his Names of Places  ‘The word Lann is Irish but in its ecclesiastical application it was borrowed from Welsh.’  The purpose of standing stones is unclear with several believed to have been boundary or territorial markers, ritual or ceremonial sites or may have been burial sites or part of an astrological alignment.  This stone was originally a Bronze Age monument but Christianized later. (15th September 2018) [iii]

Lankill was an early church site where a slim standing stone with a cross inscription is situated.  The site lies on the pilgrim way Tochar Phadraig.  Marked on the Ordnance Survey map as S: 38 009 793.  An image by Anthony Weir is featured on this site. [iv]

An article titled CULTURE Legacy of Lankill  in The Mayo News by Aine Ryan reported on the Hughes’s family history with their link to heritage: Charles’s Hughes’ daughter Mary stated that ‘It is a long strip of land sloping down to Ballinlough lake much of which was covered in woodland up to the beginning of the last century, when it was cut down for export.  Hidden in this woodland were church grounds, the remains such as a Mass rock, a cillín, a standing stone with pagan markings crossed with a cross, all indicating an ancient monastic site, and so Lankill (Lainn-Cilleadh) in Irish means a long narrow strip of woodland which contains church grounds.’  (15th May 2015) [v]

A seven – foot tall stone is located at Lankill.  On its east side are four concentric circles also a cross.  The west face has a cross with a V-shaped ornament beneath it. (Croagh Patrick Heritage Trail Part 3, The Mayo News’16th August 2016 Martin Dillane) [vi]

Lankill Standing Stone is located within a field 2.7 kilometres west-southwest of Aughagower also south of Knappaghbeg Lough.  Immediately to the southwest is an early monastic site of Toberbrendan.  Lankill standing stone possibly dates from the bronze age but several years later was Christianized with a carved cross inscribed on it. The purpose of these stones is unclear with several believed to be boundary or territorial markers, ritual or ceremonial sites or even possible burial sites, or as part of an astrological alignment.  The standing stone is a spike of shale with a height of 2. 5 metres.  A cross with a V-shaped ornament beneath it is located on its west face.  A Latin cross in a double circle with four concentric circles are Inscribed on the east face. [vii]

Lankhill Standing Stone is seven feet in height.  It is  situated within a woodland of native oaks with a monastic settlement, a penal mass rock & a burial chamber within the area.  It was possibly dated to the bronze age then Christianized later.  Lankhill or ‘Lainn Cille‘ according to Joyce in his Names of Places stated that ‘the word Lann is Irish but in its ecclesiastical application it was borrowed from Welsh.’  The purpose of standing stones is unclear; several  are thought to be boundary or territorial markers, ritual or ceremonial sites also possible burial sites or part of an astrological alignment.[viii]

Lankill Standing Stone national monument may be viewed in County Mayo. This is located within in a field 2.7 kilometres west-southwest of Aughagower also south of Knappaghbeg Lough.  An early monastic site Toberbrendan  is immediately to the southwest.  This stone possibly dated from the Bronze Age period: it was Christianized centuries later with a cross inscription carved on its surface.  Lankhill stone is a spike of shale with a height of 2.5 metres.  On the west face is a cross with a V-shaped ornament beneath it whilst on the east face is a Latin cross in a double circle with four concentric circles. (The purpose of standing stones is unclear.  It is believed that they may have served as boundary markers, ritual or ceremonial sites, burial sites or astrological alignments) [ix]

Lankhill Standing Stone is referenced on both these links as number 297,  MA098-003007-, in State Care: Ownership Guardianship Mayo: https://www.archaeology.ie/sites/default/files/media/pdf/monuments-in-state-care-mayo.pdf   / https://data.oireachtas.ie/ie/oireachtas/committee/dail/31/committee_of_public_accounts/submissions/2014/2014-03-06

Lankhill Standing Stone is referenced in Henry Françoise’s Megalithic and Early Christian Remains at Lankhill  1952  in The Journal of the Royal Society of Antiquaries of Ireland:  https://www.jstor.org/stable/25510809

Lankhill Standing Stone is referenced in the Herrity Michael, Kelly Dorothy & Mattenberger Ursula  List of Early Christian Cross Slabs in Seven North-Western Counties 1997  vol. 127 (pages 80-124) The Journal of the Royal Society of Antiquaries of Ireland.  Article may be downloaded at : https://www.jstor.org/stable/25549828

The standing stones at Lankhill were referenced in The Irish Times  27th December 2003 at this link: https://www.irishtimes.com/news/mayo-pilgrims-take-royal-road-to-croagh-patrick-1.402263

[vi] Bowled over by (https://www.mayonews.ie/living/outdoor-living/28386-bowled-over-by-last-leg-of-croagh-patrick-trail) [Assessed 23rd May 2021]