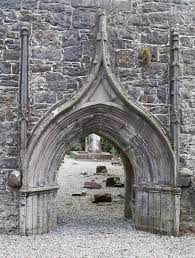 Ballina’s  Augustinian Abbey was originally the site of a religious community.  It was known as the ‘Augustinian House of St. Mary of Ardnare.’  The ruins of the abbey adjoin the grounds of St. Muredach’s Cathedral on the east bank of the river Moy.  The foundation date is unknown but a reference from 1410 stated a papal degree mentioned the Augustinian house of St. Mary of Ardnaree.  The abbey was a centre for learning, among its most famous priests was Augustinian Gerard Martyn (who was appointed Bishop of Killala in 1452)  The remains of the abbey in this century are believed to have been from circa 1427 when it was established by Tadgh Riabach O ‘Dowd.  Murtagh O ‘Dowd was interred in the adjoining cemetery during 1402.  His family provided patronage to the monastery that continued until its dissolution.  As with other ecclesiastical monasteries under the reign of Elizabeth 1 this abbey was dissolved. Several of the friars continued to live locally in Ardnaree.  Abbey Priors were appointed continuously up to 1835.  This article features photos of 12th September 2015 by Anthony Hickey. [ii]

A field survey by Anne-Julie Lafaye reported that  Ardnaree Friary ruins are located within the grounds of St Muredach’s Cathedral on the eastern bank of the river Moy.  A previous castle had been sited at Ardnaree.  Ballina town was not yet in existence during the fourteenth century when the friary was established under the patronage of the O ‘Dowda family.  During 1306 the ecclesiastical taxation of the parish church at Ardnaree was valued at four pounds.  Mendicant friaries as well as this building were comprised of a long nave with chancel.  An additional rather long chapel or transept extended to the south of the nave.  Entrance was assessed through a single pointed arch.  On each side of the doorway were carved figures (it was possible they represented the patrons who commissioned the impressive doorway)  A wall tomb also fragmentary remains of another in the south wall of the chancel  are similar to two wall tombs in Rathfran Dominican Friary  (Ardnaree will eventually be featured on the Monastic Ireland Project website, www.monastic.ie.  9th May 2018)  [iii]

This fourteenth century Augustinian Abbey is located next to St. Muredach’s Cathedral & graveyard on the east bank of the river Moy in Ballina.  As Ardnaree was part of County Sligo pre boundary changes during 1899 it then became part of County Mayo also Ballina Town was founded.  Following the dissolution of monasteries in Ireland during the sixteenth century all the abbey lands continued to be used as a burial ground up until the 1950’s.  Coordinates are 54.112578 N, 9.151751 W. (recorded April 2011) [iv]

An original settlement was located at Ardnaree in Ballina.  Abbey is located close by at St. Muredach’s Cathedral.  The Augustinian Abbey was founded during the 1400’s by local chieftains called the O ‘Dowds of Hy Fiachrach.  Following the dissolution of monasteries in Ireland during in the sixteenth century, the abbey lands were used as a burial ground up until the 1950’s.  There are unique carvings over the doorway, but the monastery is in ruins. [v]

North Mayo is home to at least six historic abbeys: one of these includes Ardnaree Augustinian Abbey.  This abbey was located along the banks of the river Moy in Abbeyhalfquarter street in the grounds adjacent to St. Muredeach’s Cathedral.  This abbey is thought to have been constructed on the site of a former ecclesiastical site called the Augustinian house of St. Mary of Ardnaree.  The abbey was believed to have been founded circa 1427 by Tadhg Riabhach Ó ‘Dubhda (O’Dowd ), King of Uí Fiachrach Muaidhe.  The O ’Dowd’s were patrons of Ardnaree abbey until the dissolution under the reign of Queen Elizabeth I of England.  (17th February 2020) [vi]

Ardnaree Augustinian Friary is listed among monasteries or abbeys on this site as founded pre 1400 by the O ‘Dowda family.  It was believed that friars were in position there between 1577 to 82 also up to the late eighteenth century.  The impressively decorated doorway features on several sites.  Coordinates are 54 06 44 N, 9 09 06 W. [vii]

Ardnaree was part of County Sligo until the boundary changes during 1899 brought it into County Mayo.  The site was originally an Augustinian Abbey that dated from the fourteenth century prior to the founding of Ballina town.  Following the dissolution of all monasteries in Ireland during the sixteenth century the abbey lands continued to be used as burial grounds until the 1950’s.  The adjoining graveyard is situated next to the St Muredach’s Cathedral on the east bank of the river Moy at Cathedral Road in Ballina. [viii]

An extract from Bernard O ‘Hara’s MAYO-Aspects of its Heritage  references the  Augustinian Friary was founded by the O’Dowd’s during 1427.  It may be viewed in Ardnaree. [ix]

This PDF has an image of the fifteenth century Ardnaree Abbey beside the St. Muredach’s Cathedral in Ballina: https://www.buildingsofireland.ie/app/uploads/2019/10/Mayo.pdf

Ballina Friary image is featured on this link: https://www.tripadvisor.ie/Attraction_Review-g211864-d216581-Reviews-Ballina_Ardnaree_Friary-Ballina_County_Mayo_Western_Ireland.html

An image of the decorated doorway of the Ardnaree Augustinian Abbey by Andreas F. Borchert from 14th September 2003 may be viewed at this link: https://commons.wikimedia.org/wiki/File:Ballina_Ardnaree_Friary_2013_09_14.jpg