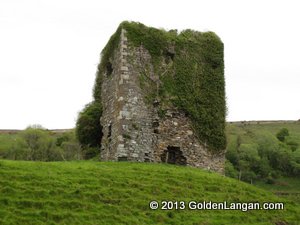 Ballinglen Castle ruins are situated in a valley on the west side of the Ballinglen river in Ballycastle, north Mayo. Several large corner stones also quite a lot of masonry has been removed.  It was a Norman castle constructed circa. 1500 A D  two miles south of Ballycastle.  An altar room included an altar.  The ruins today have thick walls at the base.  A hidden passage was exposed due to the collapse of the roof & the north wall: http://goldenlangan.com/ballinglencastle.html

A description in the 1943 Survey of Antiquities stated that within Ballinglen townland are the ruins of an old Norman castle.  It was believed that the castle was constructed by the Barratt’s. In later years it was seized by the Bourke’s. The ruins could be seen far back of the river to the right-hand side of the road when one was about two miles from Ballycastle.  A road to the right led to the farmhouses near the Castle.  Thick stone walls of the castle are approximately five feet in height also it was thirty squares in width.  The walls at that time were visibly crumbling.  The usual complement of secret passages existed but no trace remains.  A stone staircase led upwards in the initial building: this is now impassable beyond the first story.  During that time frame the lands on which the ruins of the castle stood were owned by Mr. Sean Purcell.  He provided permission to visitors to explore the area. [i]

One may view an abridged version of Ballycastle at this link. [iii]