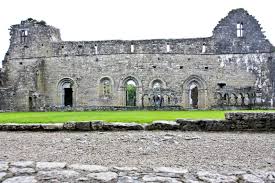 Cong Abbey also known as the Royal Abbey of Cong was established during the twelfth century on the site of a former seventh century monastic settlement founded by either the nephew of an Irish King Domnal or St. Feichin who had been an abbot there in its early period.  During 1134 the abbey was re-founded for the Canons Regular of St. Augustinian by Ireland’s High King Turlough O ‘Connor.  His son, the last of Ireland’s High King’s made additional renovations prior to his demise in 1198.  From Cong Village one may enter the ruins through a Romanesque type doorway, of which the arch was made from stones formally used in another arch on the northern wall.  The most striking features of the 42. 6 metres long great church are the three lancet east windows also the tombstone paved floor.  From the Cloister House is another carved doorway with capitals on the cloister side.  Erected during the thirteenth century then it was reconstructed later.  Several of the capitals in the cloister also on the doorway were carved during the nineteenth century.  A fishing house was erected during the fifteenth or sixteenth centuries over the River Cong with a trapdoor on the floor that allowed the monks protection or comfort while they worked.  Several images feature by Jim Dempsey & Deb Snelson. [i]

The ruins of the Cong Ecclesiastical Complex were recorded by Wilde as belonging to the twelfth century.  Gratitude was extended to Sir B. L. Guinness for his restoration of the abbey.  The beautiful doorway was constructed with stones removed from another arch in the northern wall.   Great Abbey Church was one hundred & forty feet in length: it was filled with tombstones that faced the east window.  Three long narrow lights in each side wall of the church had slender windows that faced north & south.  An arched doorway in the southern wall led to a low vaulted apartment from there to a large open space that contained the principal stairs.  These led up to the second story of the great tower.  To the east & south of this is a graveyard & site of the Roman Catholic Chapel.  Several gravestones were decorated with crosses, fleur-de-lis, chalices also ornate croziers with Latin Inscriptions. Divided by a high screen wall the western façade formed the present architectural feature (image on page)  It measured eighty feet in length & contained a doorway also two windows with circular arches.  Two large elaborate ornamented lancet – headed doors with undercut chevrons along the deep moulded arches.  These sprang from clustered pillars. The floral capitals presented one of the finest specimens of twelfth century stonework within Ireland.  Several stones were inserted in those carved limestone doorways. (page 113)  Above the stringcourse were several narrow lights possibly of dormitories.  To the west of this wall were open cloisters.  In the south wall was a piscina also a recess with a circular arch (possibly the tomb of the founder?)  [ii]

During 1224 Maurice the Canon son of Roderick O ‘Conner was interred at Cong.   An inscription stated that ‘A. D. 1226 Nuala, daughter of King Roderick O ‘Conner & Queen of Ulidia died at Cunga Feichin, and was honourably interred in the church of the canons.’ Chieftains, warriors, prelates also abbots were interred within the abbey up to the time of James Lynch in 1703 where he had a decorated tomb.  Wilde mentioned these following tombs that had inscriptions: ‘A.D. 1150 Muireadhach Ua Dubhthaigh, Archbishop of Connacht, Chief Senior of all Ireland in wisdom, in chastity, in the bestowal of jewels and food, died at Cunga on the 16th of the month of May, on the festival of St. Brénainn, in the 75th year of his age.’   His name is inscribed on the great processional ‘Cross of Cong’ produced in 1123.  (page 100)  Also on the same page this inscription: ‘A.D. 1168, Flannagán Ua Dubhthaigh, bishop and chief doctor of the Irish in literature, history, and poetry, and in every kind of science known to man in his time, died in the bed of Muireadhach Ua Dubhthaigh, at Cunga.’   During 1872 ‘The Lord Abbot’  Rev. Patrick Prendergast (the last abbot) was interred within the abbey.  During excavations several objects of interest were discovered that included among them a cross thirteen inches high, the quadrangular fragment of the shaft of an ancient ross. (page 94)  (Extracts from William R. Wilde’s ‘Loch Corrib – its Shores & Islands.’  Several sketches feature at this link. (22 / 7 / 2020) [iii]

Cong named from ‘Cúnga Fheichin’ means St. Feichin’s Narrow.  However, no trace remains of this abbey from the seventh century.  Cong Abbey ruins date from the twelfth or early thirteenth centuries.  A footpath passes over the river at the monk’s fishing house, constructed either in the fifteenth or sixteenth century.  A trapdoor in the floor allowed a net to be cast into the river to fish. A  fireplace inside provided heat to the monks.  It was reported that a line to the abbey kitchen would have alerted the monks that there was fish to be cooked. [iv]

During 623 St. Feichin founded a monastery in the area known as Cúnga Feichin  ‘Feichin’s neck.’   During 1106 Ireland’s High King Turlough O ‘Connor established a monastery as a major learning centre for its three thousand scholars on this site.  The last High King of Ireland Rory O ‘Connor spent twelve years at the abbey.  During 1860 Sir Benjamin Guinness reconstructed the abbey.  The Cong Foy’s master stonemasons completed the masonry of three carved doorways that consisted of Gothic arches, carved capitals also columns.  Part of the abbey grounds were used for local burials with a tombstone in the church’s nave that has an Inscription in Latin with a request to ‘pray for the soul of James Lynch of Conge, who died A D 1709.’  (Berni O ‘Malley) [v]

Founded by Ireland’s High King Turlough O ‘Conner as early as the twelfth century Cong Abbey was constructed on the original site of a sixth century church associated with St. Feichin.  It is one of the finest examples of early archaeological buildings.  During its tenure it acted as a hospital for the ill, a shelter for starving poor: but of more importance as a learning centre for scholars.  A fishing house in the grounds constructed over the River Cong with a trapdoor in the floor allowed monks to fish safely while a fire provided comfort during the long hours.  [vi]

Ruins of a twelfth century Augustinian Abbey in Cong village founded by the High King of Ireland during the twelfth century are the finest examples of ecclesiastical foundations. Constructed on the site of a former church associated with St. Feichin during the sixth century. Cong  Abbey once housed three thousand inhabitants of excellent scholars & skilled craftsmen.  It was the site where the last High King of Ireland passed away. [vii]

Cong Abbey was established by St. Feichin during the seventh century on the site of an earlier monastery.  The monastic complex was constructed by the King of Connaught Turlough O ‘Connor then dedicated to St. Augustine.  Following extensive refurbishment over the years & renowned as an excellent learning centre.  Several buildings remain this century including the following: Chapter House also remains of the cloister with a monks fishing house. This site features a video of the abbey. [viii]

Circa 1010 Cong was the seat of a bishopric.  Ruins of the monastic complex survive today of a twelfth century Abbey of St. Augustine.  The building suffered severely over the years but endured to become a wealthy treasured trove with an artifact ‘The Cross of Cong’  described  (page 44)   The Annals of the Four Masters recorded the demise of Muireadhach Ua Dubhthaigh.  The last High King of Ireland’s demise at the abbey during 1198.  Information from Irish Pictures Drawn with Pen & Pencil 1888 Chapter V11: Connemara by Richard Lovell. [ix]

Cong Abbey was established during 1135 by King Turlough O ‘Connor on a site previously occupied by St. Feichin’s Monastery.  Three thousand resident Cenobic Monks studied poetry, music, history, sculpture also illumination of manuscripts or books. Monks were skilled craftsmen in metalwork, engraving with the manufacture of harps.  Several architectural artifacts at the abbey survive i.e. clustered pillars, standing columns, floral capitals, arches also Romanesque doors.  The abbey was attacked then rebuilt several times in its history. The building was a shelter for the destitute also a hospital for the ill. (9th February 2021) [x]

This early Cong Monastery was founded by Domnal son of Aodh during 624.  The building became a Diocesan Cathedral in 1111 however that burnt down during 1114.  It was re – founded during 1134 (?) as an Augustinian Canons Regular by Turlough O ‘Conor.  The building burnt again in 1137.  Circa 1140 a new monastery was constructed by Turlough’s son Rory as Augustinian Canons Regular – Arroisian Adopted.  Dissolvement occurred possibly during 1568.  Building was granted during 1571 to William Collier, then in 1597 to the town of Athenry.  [xi]

This national monument of Cong Abbey was also known as the Royal Abbey of Cong.  The ruins of the former abbey have several fine architectural features that date back to the thirteenth century.  St. Feichin built a church at the site during the seventh century.  A building constructed on the site was burnt down during 1114.  Cong Abbey was established by Turlough Mor O ‘Conner.  Further destroyed in 1137 but rebuilt by him.  During 1138  the abbey was re-founded as an Augustinian settlement.  Turlough Mor O ‘Conner’s son also Ireland’s last High King Ruaidri Ua Conchobair constructed new buildings on the site. The Annals of the Four Masters  recorded that the Archbishop of Connaught Muireadhach Ua Dubhthaigh (aged seventy-five) demise occurred at Cong during 1151.  His name was inscribed in the Cross of Cong.  This Cong Abbey was rebuilt following an attack by William de Burgh during 1203.  Reconstructed further & dedicated in 1307 to St. Mary.   Further suppression occurred during 1542: several years later the building fell into ruins.  Fr. Patrick Prendergast P. P. Cong was the last Abbot.  He was custodian of the Cross of Cong: following his demise the cross was sold to the Royal Irish Academy by James Mc Cullagh.  [xii]

The monks fishing house at Cong is referenced at this site: (https://curiousireland.ie/monks-fishing-house-cong-co-mayo-15th-or-16th-century) [assessed 12th February 2021]

A PDF is available at Mayo County Library of the Irish Tourist Association Survey 1945  at this link:  https://www.mayo.ie/library

References to Cong Abbey are in the following publications:

Information of the Cross of Cong may be viewed at this site: https://www.museum.ie/en-IE/Collections-Research/Irish-Antiquities-Division-Collections/Collections-List-(1)/Early-Medieval/The-Cross-of-Cong

A further reference to the Cross of Cong reports on the wonderful tale of  Patriot Priest Fr. Pat Lavelle’s unsuccessful attempt to rescue the Cross of Cong from Dublin for his parishioners.  It may be viewed at this link: https://www.museum.ie/en-IE/Collections-Research/Irish-Antiquities-Division-Collections/Collections-List-(1)/Early-Medieval/The-Cross-of-Cong/Cong-and-the-Cross

As one climbs the steps at the entrance then enters the monastic complex a recess on right of the door to cloister once housed the original Cross of Cong under the Abbot’s protection. (NBC)