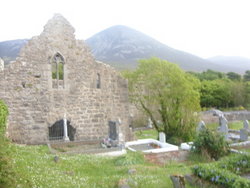 Murrisk Abbey in Carrowkeel in Co. Mayo is situated on the Clew Bay shore in the shadow of Croagh Patrick.  Founded during 1456 as an Augustinian Friary possibly because of ‘the inhabitants of those parts have not hitherto been instructed in the Faith.’   A local chieftain Hugh O ‘Malley was granted the land.  The present ruins consist of an L-shaped building that represents the church, sacristy also a chapter room.  The church is long also narrow.  An east carved window with human heads features on the outside wall.  Several windows on the south wall are crowned with battlements  that suggests the building had been fortified.  The spring of an elaborate ribbed vault is all that survives of the tower at the church’s west end.  Images of the Abbey feature at this link. [i]

Murrisk Abbey was founded by the O ‘Malley family during 1456 as a home for the Augustinian Observant Reform with permission granted by Pope Callistus 111.  Hugh O ‘ Malley, a friar of Banada Abbey in Co. Sligo was responsible for the construction of the  Leithearmurese Abbey.   Thady O ‘Malley granted land close to the sea where a previous church had been founded by St. Patrick.  A latter document stated that Lady Maeve O ‘ Connor, wife of Thady O ‘Malley’s uncle was the actual founder.  Friary was dedicated to St. Patrick then known as Muireske or Mons S. Patritii.   Ruins consist of an L-shaped structure that represented the church with several domestic buildings at an right angle that also included a sacristy, a chapter room also a room housed into the two- floored building at the northern side.  The church ruin has a single chamber with no transept or west window, possibly removed during construction of the belfry tower.  The main portal is located at the south wall.  Behind the main altar space, the east five-light tracery windows are possibly the most decorative feature of that ruin.  The sacristy is a long narrow room lit by a single round-headed window.  The chapter is located to the north of the sacristy, it features a cusped Ogee-headed window where its hoodmould ends in a knot that the develops into a foliate ornament on the north side continued on to a simple point on the South side as the late Irish Gothic style required.  The upper floor (supposedly) contained a dormitory with just one large window.  There are two carved heads on the ruin: one situated on the east wall near to the window with the other  located on the south wall.  The one on the south bears a hat whilst the other wears a beard. Battlements ruins visible on the south wall suggests the building once was fortified.  An elaborate vault may be viewed at the west end of the church possibly the only surviving feature of the belfry.  During the Reformation of Queen Elizabeth’s reign, the friars were expelled. It’s a possibility they moved to Ballyhaunis.  There is little information available of the friars from 1570 to the 1800’s. [ii]

Murrisk Abbey or Irish ‘Muraic ‘ either means ‘Muir Riasc’  / ‘marsh by the sea ’ or ‘Muir Iasc ’  ‘a sea monster‘ from the pre-Christian era.  During the mid – fifteen century Augustinian Friars founded the abbey that replaced Tóchar Phádraig as the preferred starting point for all Croagh Patrick pilgrimages.  The L-shaped ruin includes a long narrow church, the sacristy also a chapter room with an overhead dormitory.  The outside of the east window features carvings of human heads.  There are several ogees-headed & trefoil windows. The ribbed vault is the only remnant of the tower. The cemetery on the church grounds is  still in use. [iii]

The name Murrisk is either derived from ‘Muir Riasc’ /  ‘a marsh by the sea’ or ‘Muir Iasc ’ that referred to the ‘sea monster ‘ during pagan times.  During the 1400’s the abbey was founded by Pope Callistus 111. [v]

Murrisk Friary located in Co. Mayo was founded during 1457 by Hugh O ‘Malley of Banada Friary, Co. Sligo.  He had been granted permission by Pope Callistus 111 who decreed a church & priory be constructed at Croagh Patrick.  It was established on lands granted by Thady O ‘Malley.  It was constructed on the original church of St. Patrick’s site.  The ruins consist of a church with a centre aisle, with battlement walls also an eastern set window. Behind the main altar space, the east window is possibly the finest feature of the ruins.  A belfry tower was located at the church’s west end. All that survives of the tower is a vault. Despite being suppressed at the time of the reformation the friary continued until 1577. [vi]

The Augustinian Friary constructed during 1456 by Papal Mandate from Hugh O ‘Malley of Banada to a license to build a monastery.  An observant building: it was reformed during 1458.  Dissolved during 1578 the friars were expelled then the Abbey: it was granted to James Garvey.  Possibly friars returned later. [vii]

Murrisk Abbey was founded in 1452.  It was located on the water.  An image of the old abbey may be viewed at this link: https://www.tripadvisor.ie/Attraction_Review-g5230960-d7997505-Reviews-Murrisk_Abbey-Murrisk_County_Mayo_Western_Ireland.html

Murrisk Abbey is listed among Irish abbey’s at this link: https://religion.wikia.org/wiki/List_of_abbeys_and_priories_in_Ireland

A partial image of Murrisk Abbey at the foot of Croagh Patrick may be viewed at this site: https://www.irelands-blue-book.ie/itinerary-detail.html/monastic-tour-html