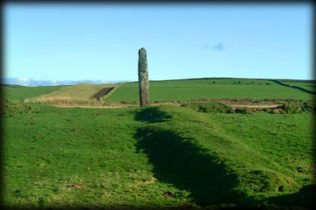 This tall standing stone is located on the northeast coast of County Mayo at Lackan Bay. According to local folklore the stone was erected by Saint Patrick, but it is believed to be of an older era.  The stone is three & a half metres in height.  Location on discovery map is 24: G 1883 3634. Coordinates are longitude 9 14 45 W, latitude 54 16 10 N.  Several images by Jim Dempsey feature on this site. (April 2004) [i]

Foghill is an anglicised form of the Gaelic ‘Fó Choill ‘  i.e. ‘under-the wood / forest.’   It may be identified as a modern form of ‘Foclut’ or ‘Foclad.’   According to folklore Foghill formed part of ‘Silva Focluti’  the celebrated Wood of Focluth that once encompassed the area from Lacken Bay to Rathfran then onwards to Crosspatrick in North Mayo.  Location of the wood of Focluth has been the subject of debate also controversy for several years among scholars of high repute due to Patrick’s comment of the woods: ‘He (Patrick) gives us only one Irish place-name, that of the wood of Foclut.  He implies that it was the place of his captivity.  The weight of the evidence is that this was a wood in the West of Ireland, in what is now County Mayo, on the western shore of Killala Bay’.  (de Paor Liam)  A bronze age standing stone known as Leac Balbeni ‘the Stone of Balbeni’  is situated in Foghill. [ii]

Marked on the Ordnance Survey Map & historic maps as a ‘Standing Stone’  the enormous monolith is located east of Cloonalaghan river that overlooks Lacken bay also southeast of Rathlacken ‘Rath Leacain’  village.  Foghill Standing Stone is orientated northwest – southeast on a slope that faces north.  This monument measures 3.4 metres in height, is 0.50 metres in width also 0.30 metres in depth.  An image by Powel Pip from 2010 features on this page. [iii]

Foghill in Lacken is a parish with a long link to St. Patrick .  In his Confessions  he penned  that ‘in a night vision I saw a man coming as it were from Ireland.  His name was Victoricus and he carried many letters and gave me one of them.  I read the heading ‘The voice of the Irish’.  As I began the letter, I imagined in that moment that I heard the voice of those very people who were near the wood of Foclut, which is beside the western sea, and they cried out as one voice ‘We appeal to you holy servant boy to come and walk among us’.  Liam de Paor a lecturer in Archaeology & History in U.C.D  in his St .Patrick’s World  1993  stated ‘He (Patrick) gives us only one Irish place name, that of the wood of Foclut.’  He implies that this was the place of his captivity.’  (Brian Hoban 17th Mar 2012)  [iv]