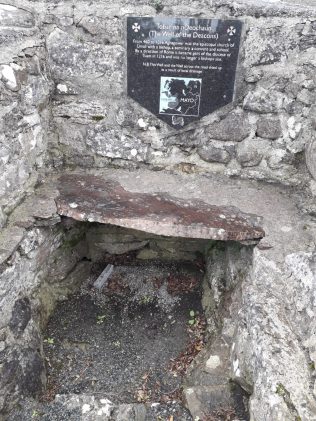 When the persecution of Catholics began following the Reformation, numbers began to assemble for devotional purposes at such wells.  When Catholics were forbidden under the Penal Laws to assemble for Mass in churches, altars were erected beside these wells  and Mass was said there in secret whenever possible for the assembled faithful.  If no priest could be found, private devotions were carried out by a lay leader of the people.  Each well is usually found in a quiet place, sheltered by trees, and covered by a flat stone shade to preserve it from contamination.  Round the well a circle is traced and there are ‘statues’ or resting places for prayer & mediation at regular intervals along the line of the circle.  Close to the well there is a crude altar beside a tree trunk on which a crucifix in wood or stone is hung on the branches of the trees in the vicinity, small pieces of cloth may be fastened . At the close of the visit the pilgrim may drink some water from the well by a vessel secured with a chain to a nearby stone or wall. [i]

During the nineteenth century the people in a locality visited holy wells on feast days.  They requested a cure of the particular saint of the well, then when these were granted, they decorated a nearby bush with a rag in thanksgiving.  They walked round the well a certain number of times as they prayed on the pattern day.  These pattern days occurred usually on the last Sunday in July called Garland Sunday or on the 15th August.  Both dates corresponded with the festival of Crom Dubh or Lunasa. (A Step Back In Time with James Reddiough, October 14, 2017 a history) [ii]

The nineteenth century devotional rituals or ‘Long Stations’ engaged by people were quite complex. Possibly up to fifteen thousand to twenty thousand people attended on the feast day’s eve.  Bare foot pilgrims began the rituals in the graveyard where they knelt then said a pater, ave &  gloria seven times.  They crawled on their knees to the high altar at the second church as they recited one pater also fifteen aves.  At the altar they recited the litany of the Blessed Virgin & seven aves with seven glories.  They walked around the graveyard seven times as they prayed fifteen decades of the rosary.  As they returned to the altar, they again recited the pater, ave & gloria five times.  At each cairn, they recited five paters & aves.  They turned around three times.  At the holy well they made the sign of the cross with its waters as they prayed one ave each time.  That completed their Station.  (Rynne, 1998, p. 183) [iii]

The holy wells’ origins may be linked to Celtic times.  Native Irish were influenced in terms of their religious beliefs especially with an emphasis on the ‘power of place.’  It was a belief that society was intrinsically linked with nature itself.  Certain physical sites preserve both regenerative & curative powers.  Site surveys have indicated that several of the well locations were formed of three distinct elements.  These were the locations of the water source that served it with an ancient & sizeable tree, a hazel tree and often a standing stone or a link.  Rituals known as patterns generally included a prescribed clockwise walk around the site.  One common ritual was to tie a scrap of cloth, known as a clootie to the holy tree branches for bathing / washing or drinking from the holy well.[iv]

Holy Well rituals tended to date from pre-Christian times.  They served as a form of natural religion in which a well was considered sacred.  They varied greatly in appearance, some simply decorated with rounded river stones.  Several were highly ornate adorned with holy statues, medals, pictures, rosary beads, flowers or candles.  Famous for their healing properties in several areas, rags, handkerchiefs, or clothes were tied to trees above or around the holy well.  It was a belief that as the rag disintegrated the illness or disease would leave the person.  A red coloured cloth was believed to resist the powerful evil spirits.  Logan Patrick cited a claim in ‘The Holy Wells of Ireland’  that there are approximately three thousand holy wells within Ireland with possibly one in every parish in a county.  An extract from ‘Holy Wells of Ireland’  by Most Rev. John Healy, D.D. Archbishop of Tuam, reported that ‘as a rule, all the Irish Saints have one or more blessed wells dedicated to their memory in the immediate neighbourhood of the churches they founded.  Indeed, the church was never founded except near a well.  Water was necessary, mainly for Baptism and the Holy Sacrifice but also for daily needs of the holy men and women whose lives were given there in the service of God.  We believe them (i.e. the saints) ancient holiness still lingers round our blessed wells, that their holy patrons still pray in a special way for those that frequent them.’  A list of Ireland’s holy wells may be viewed at this link. [v]

Several historians believed that the springs from which St. Patrick and the early Irish took water to baptise their converts was held in veneration by the early Christians, then regarded in these early times as places of pilgrimage. When the persecution of Catholics began following the reformation large numbers assembled for devotional purposes at such wells.  They were forbidden under the penal laws to assemble for mass in churches altars were erected beside these holy wells.  Mass was consecrated in secret whenever possible for the assembled faithful.  If no priest could be found private devotions were carried out by a lay leader of the people.  Each holy well is usually in a quiet place, sheltered by trees: often covered by a flat stone slab to preserve it from contamination.  A circle is traced,  there are stations  or resting places for prayer & meditation at regular intervals along the line of the circle.  Close to the well there is a crude altar beside a tree trunk on which a crucifix in wood or stone is hung.  On the tree branches in the vicinity small pieces of cloth may be fastened.  These are memorials of pilgrims’ visits.  At the close of the visit the pilgrim may drink some water from the holy well out of a vessel secured by a chain to a nearby stone or wall. (Extract from ‘Sight Unseen’ Programme Bernadette Players 1958)  [vi]

Twenty-one wells in Dublin with sixteen wells in the Fingal area have been identified by Petra Skyvova 2005 (A Step Back In Time with James Reddiough October 14, 2017) [vii]

Several Holy wells within County Mayo are referenced below.

Tobair na nDeachan (Well of the Deacons) in Aughagower (Fields of the Spring) has dried up but the site is situated on the roadside at the north-east corner of the graveyard.  Its longitude is 9 27 55 W, its Latitude 53 45 52 N.  Images by Jim Dempsey are featured at this link. [ix]

Close to the church is ‘Dabach Phadraig’ or ‘Leaba Padraig’  where the saint was supposed to have slept.  Pilgrims performed stations from one of the monuments ‘Leaba Padraig’ to the holy well (now dried up) that was called Tobair na nDeachan or ‘The Well of the Deacons.’   [x]

Information by author re Aughagower holy well may be viewed at this link: https://www.ouririshheritage.org/content/archive/place/miscellaneous-place/aghagower-co-mayo

At Kilgarvin (Cill na nGarbhan), Bonniconlon a Holy Well dedicated to St. Brian may be visited at the nearby Ellaghbeg district.  During the nineteenth century pilgrims attended on Garland Friday in July to pray the rosary as they walked around the holy well several times within the local cemetery.  Close to that holy well is a flat stone that bore the footprints & hand prints of the saint.  The tradition was also held on 15th August annually. (James Reddiough)  [xi]

St. Deirbhle’s Holy Well is situated at Eachléim within North Mayo.  The holy well is located approximately 0.95 metres north south by 3.9 metres east west.  Surrounded by a stone enclosure it is 5.5 north west by 3.6 metres east west.  The holy well is fed by an undergrounds.  To the front of the well is an altar or ‘eacht.’  According to tradition St. Derbhle cured a daughter of Cormac Mac Dathí (a nobleman) of an eye infection at the holy well.  She founded her convent there during the sixth century. St Derbhle  is referenced in the Annals of Connaught’ by the Four Masters, also Mac Firbish’s ‘Leacan Buí Leacan’ . An image may be viewed at this link from Ionad Deirbhle Eachléim.  [xii]

The church of the oak tree was founded by St. Patrick during 440 A D with a well nearby.  The church is situated beside a holy well three miles outside Ballyhaunis. It was a place of deep veneration &  pilgrimages for centuries.  On the last Sunday of July pious devotions were held.  During the 2000 Millennium on 21st May several people walked from St. Patrick’s Church to the Ballyhaunis Holy Well.  A ceremony was conducted by Canon Cooney & Rev. James O ‘Grady as they blessed a plaque attached to the old oak tree. [xiii]

Tober Mac Duagh Holy Well is located at Kileen in the parish of Drum.  Dedicated to Colman Mac Duac during the seventh century.  Stations of the cross were performed annually on Good Friday prior to a practice that ceased over one hundred years ago.  When the holy well was being refurbished a small memorial was included to the memory of the unbaptised children who had been buried in the area. (Brian Hoban)  [xiv]

Tobar Mhuire Holy Well near Rosserk Abbey in Ballina is one of the most unique holy wells within Ireland.  It has been covered over with a chapel dedicated to the Blessed Virgin erected by John Lynott during 1798.  A rosary path was opened during 2007 by Rev. John Fleming bishop of Killala also Right Rev. Dr. Richard C. A. Henderson Bishop of Tuam, Killala & Achonry.  A barely legible inscription is in both English & Latin: the latter one translates as ‘Pursue justice, then you shall have no fear of God in death.’  One of the most interesting aspects of Tobar Mhuire is that they are seven stations in the form of circles or mounds around the well.  A hawthorn bush protrudes through the roof of the chapel decorated with rags or other memorabilia.  The pattern day / novena is held annually from 15th August to 8th September.  Several images feature at this link. [xv]

The following publications may be of interest:

Rynne, E. The Round Tower, Evil ye, and Holy Well at Balla Co Mayo’s  1998 in Manning C. (ed) Dublin and Beyond the Pale. Studies in honour of Paddy Healy (Wordwell Bray) (in association with Rathmichael Historical Society) (pages 177-184): https://pilgrimagemedievalireland.com/tag/holy-wells-of-mayo/

A reference to Achill Island’s holy wells may be viewed at this link: https://achilltourism.com/achill-island-tourism-archaeology-on-achill-co-mayo-ireland/

According to Tamlyn McHugh of Fadó Archaeology there were one hundred & six holy wells recorded in the Archaeology Survey of Ireland. (The Mayo News 16th August 2022 (page 1 of Notes)